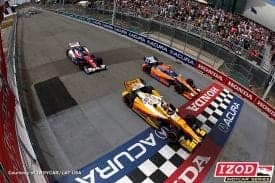 While mayhem happened behind him on the final restart, Ryan Hunter-Reay held on at the front in Toronto to score his third consecutive victory. Photo credit INDYCAR/LAT USA.

*In a nutshell:* Ryan Hunter-Reay spanked the field for a third straight week, taking home the checkers in the Honda Indy Toronto in a race that wa surprisingly light on drama. Charlie Kimball was the real surprise of the day, driving a brilliant race and finishing a career best 2nd place. Mike Conway, Tony Kanaan and Oriol Servia rounded out the top 5.

*Key Moment:* With under 10 laps left in the race, Hunter-Reay had checked out to a 7 second lead and looked primed for victory. However, with 7 laps remaining, Josef Newgarden overshot a turn trying to pass Simon Pagenaud and stalled the car on track. This brought out a yellow which set up a short dash to the finish. Hunter-Reay held off the field with ease and cruised to an easy win as the field wrecked behind him, forcing the race to end under yellow.

-Dario Franchitti looked strong early, but a critical error on pit road during a stop on lap 27 killed whatever chance the Scottish driver had at a victory.

-Will Power also appeared to have a strong car early in the event, but his front wing broke off mid race and essentially destroyed whatever chance of a victory he had prior to the incident.

-The final restart of the race was hectic to say the least. Charlie Kimball and Sebastien Bourdais went wheel to wheel into the first corner which forced Bourdais into the wall. This caused a big mess behind the leaders and led to the race ending under yellow.

*Notable Driver:* With all due respect to Ryan Hunter-Reay and his recent stretch of dominance, another American driver stepped up in a big way on Sunday. That driver was *Charlie Kimball*. Kimball has had a very ho-hum career so far in IndyCar, and his biggest claim to fame to date is that he is the first diabetic driver to race in a major racing series. However, if Kimball continues to run as well as he has as of late, he will simply be known as a great driver. Kimball’s 2nd place finish was his best IndyCar finish ever, and one could probably make an argument that Kimball is the most improved driver on the circuit this year.

-Last year’s two primary title contenders, Will Power and Dario Franchitti, both had horrendous days in Toronto. Both drivers have had poor luck as of late, and if they can’t turn things around over the next few races, neither one of them will be in the title conversation for 2012. Power couldn’t even avoid trouble in the warmup sessions, where a run in with Simon Pagenaud came close to ruining Power’s weekend before it started.

-Ryan Hunter-Reay’s third straight victory vaulted him into the points lead. Hunter-Reay proved this weekend that he is a serious title contender. Should Hunter-Reay win the 2012 title, he’d be the first American since Sam Hornish Jr. in 2006 to take home the championship honors.

-Josef Newgarden’s rookie season has been a bit of a whirlwind, and it took another negative turn in Sunday’s race. Newgarden was headed for a much needed Top 10 finish when an ill timed pass on Simon Pagenaud led to Newgarden missing a turn and stalling the car. For as much promise as Newgarden has shown this season, he’s going to have to deliver a few good results by the season’s end if he plans on keeping his ride in 2013.

“Too many idiots out there” _Sebastian Bourdais on the end of the race._

“Watched a great (at)IndyCar race. Sorry for (at)simonpagenaud. Had no audio on airport TV. Why did he drop back ??” _German Auto Racer Klaus Graf ((at)Klaus(underscore)Graf) on the race_

“First of all Vince, I am so happy to be on TV!” _Oriol Servia on finally getting some love from ABC_

“It really shows that this team can get it done on all venues” _Ryan Hunter-Reay on how his win displayed his team’s versatility._

*Whats Next:* The Canadian sweep continues in two weeks as the IndyCar Series hits the Streets of Edmonton on July 22nd. This track stands apart from other street courses on the schedule as the Edmonton circuit actually takes place at the city’s airport. The track has long straightaways and usually puts on a good show, so you can expect an exciting event.