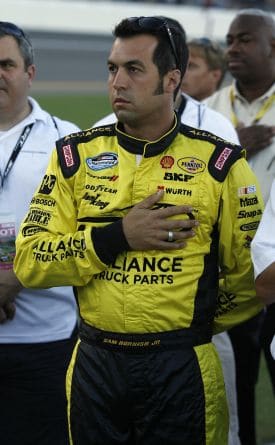 If there’s a way to describe Sam Hornish Jr.’s redeye flight and subsequent stint as a fill-in driver for the currently-suspended AJ Allmendinger on Saturday night at Daytona, it’s that of a good soldier. With less than a four hour notice, Hornish hopped on a plane from Charlotte to Daytona Beach, jumped into the No. 22 car for the first time all weekend (his first Cup ride in over two months), and turned in a 33rd place performance after suffering a blown tire at the race’s midway point. It was only fitting, a quiet finish for the latest setback in what has been a disastrous season for Penske Racing’s second car.

Acting as a good soldier, Sam Hornish Jr. filled in for AJ Allmendinger on Saturday with little notice.

Ultimately, the ugly result on this Saturday was going to come, no matter what Hornish did. The driver did everything he was supposed to do in his emergency role, keeping the No. 22 out of trouble on and off the track, just trying to limp through a weekend that may well spell the end of AJ Allmendinger’s tenure in the Shell/Pennzoil ride; even if the Dinger’s B sample ends up casting doubt on his first positive drug test, one must not forget that this same sponsor jettisoned a Sprint Cup champion in Kurt Busch for profanity uttered off the track. Trying to wash away the stain of suspected drug use is about as tough a PR job as they come, especially in the case of a driver mired outside the top 20 in points and having observable difficulties meshing with his crew even before this snafu.

Which leaves Penske Racing in a huge lurch; the No. 22 team’s 2012 season was already off the tracks before this episode unfolded; teammate Brad Keselowski has as many wins as the Shell team has top 10s halfway through the campaign. More significantly, the team is now on strike 2 with a sponsor they did so well to poach from Richard Childress Racing. First Kurt Busch had to go because of his tirades off the track and temper on it, now Allmendinger decided to do his Jeremy Mayfield impression. For all the disappointments on the track, Penske Racing, the organization long characterized by professionalism and polish with the Captain at the helm, the off-track woes have been the most surprising and disappointing… and they’re the only ones the team can hope to fix this year.

The good news for Penske: they’ve got just the driver in the wings to get back their image off the track. The bad news: that driver is Sam Hornish Jr., and he’s played this game before.

Hornish’s credentials as a racecar driver are beyond reproach, the winner of three IndyCar championships and the 2006 Indianapolis 500. But his first foray into stock car racing was an unmitigated disaster. With sponsor Mobil 1 wanting to go Cup racing at Penske, and immediately, the open-wheeler was thrown into the No. 77 Cup car despite having gone two for eight in merely qualifying for Cup races in his limited 2007 schedule. With no real time for development as a stock car driver, Hornish limped through three full seasons of Cup racing, finishing no better than 28th in points in any of them with only eight top 10s in 106 starts. Sure, there isn’t a driver out there that would likely say no to racing Cup, but there’s something to be said for a driver as accomplished as Hornish to agree to such a move, one that had little chance of success.

This recipe for disaster came to fruition, one that nearly derailed Hornish’s career for good. Coming into 2011 with only a handful of Nationwide races scheduled… and those that were scheduled being staffed by a pit crew pulled from projects all over the Penske Racing shop sporadically, the driver finally found footing in the development series he should have been driving in that 2008 season. Scoring six top 10s and contending for a win at Iowa before scoring a victory at Phoenix that all but secured a full season sponsorship for the 2012 Nationwide season, Hornish was finally developing as a stock car driver — a rare second chance in a sport that has chewed up and spat out tons of drivers that moved too quick (Dario Franchitti, Brad Coleman, and Casey Atwood are three of many).

Problem is, the good soldier may be called upon again on behalf of the company to step up and fill shoes for a sponsor that wants to race Cup, now. Though Hornish is having a career season in stock car competition — fourth in points with nine top 10s in 16 starts — he’s suddenly the prime candidate to go back to the Cup seat for which he is starting to get developed. Hornish is a long-time Penske veteran, making him an invaluable driver to put in the seat of the No. 22… because he’s not going to berate the crew or the equipment. He’s got experience with sponsor Shell/Pennzoil, having previously represented the company during his IndyCar days. And perhaps most importantly, having been in the Penske organization for over a decade, he can be trusted to behave on and off the track. He’s the one sure-fire name out there that will stop the bleeding with this team, even if that doesn’t translate into top 10s on the track.

While speculation is currently running wild that free agents such as Brian Vickers or Reed Sorenson (who filled in for much of the 2010 season with Red Bull Racing) will likely be getting the call should Allmendinger’s suspension become indefinite, it’s hard to imagine the Penske camp trying to fix their current issues with another outside hire. The list of outside hires that aren’t panning out for their Cup program is getting gargantuan. Brendan Gaughan lasted one season. Travis Kvapil, one season. Kurt Busch won races and made the Chase consistently, but never was a title contender for the team… and boy did that marriage end ugly. And as for Allmendinger: underwhelming on the track, no improvement in communication for the No. 22 team, and now this drug testing matter… anyone seeing a pattern here?

Penske Racing has long been a culture within itself, so it’s hardly surprising that not just anyone can make it work racing for them. But that does limit their choices to fill out 2012.

And while the team is fortunate enough to have Hornish in the wings should the time come to fill the No. 22, one can’t help but wonder whether having him play the good soldier again is in his best interests. Having a full-time ride in a development series without the distraction of Cup is proving to be a winning situation for Hornish on the scoring charts. Even if he’s capable of double-dipping, one must not forget that the No. 22 team is in dire straits right now, well behind the No. 2 squad; the team is a real fixer-upper, and will be getting less attention now that their season is shot and Keselowski is raring for a top Chase seed.

Hornish has played this game for Penske before. Take over a Cup ride that wasn’t that good to begin with based all but solely on sponsorship requirements, and throw development to the wind in the process.

The first time, the good soldier’s career in stock cars nearly came to an end. This time around, a shot at a Nationwide title may go up in smoke.

Penske Racing’s got a real conundrum on their hands.