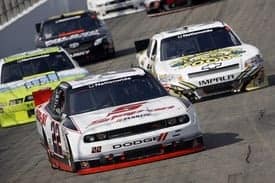 Brad Keselowski scored his third consecutive NHMS Nationwide pole on Saturday and led the most laps en route to victory at Loudon.

*In A Nutshell:* Was it Saturday afternoon or Sunday? It could have been either after Sprint Cup regulars put on a dominating show that saw Brad Keselowski emerge victorious for the second time in 2012. Keselowski easily took the pole with Kasey Kahne beside him, and both led early. And even if Keselowski hadn’t made his race winning pass, the victory still would almost certainly have gone to Cup regular Kevin Harvick. In fact, with the exception of yellow flag laps, Nationwide regulars did not lead during the race. Nationwide regulars did comprise the rest of the top 5, with Austin Dillon, Sam Hornish, Jr., and Ricky Stenhouse, Jr. filling those spots. Dillon, the top finishing NNS regular, took home a $100,000 bonus via the Dash for Cash program, which rewards series regulars in certain races.

There were no major incidents early in the race, which was run under a sweltering, humid New Hampshire sky. The first caution flew at lap 38 for debris, and other than those four laps, the race was green until lap 82, when Travis Pastrana wrecked by himself in Turn 4, giving Austin Dillon the chance to lead one lap under caution, the only lap he would lead all afternoon. Jason Bowles was also able to get a bonus point under yellow after Cole Whitt and Danny Efland got together on lap 122. The final caution of the day came out at lap for a run-in between Bowles and Danica Patrick. The final 46 laps were run under the green flag. Keselowski led four times for a total of 131 laps en route to the win.

The point leader coming to Loudon, Elliott Sadler also had a top 10 result, finishing in seventh place and keeping his points lead over Austin Dillon by three markers. Ricky Stenhouse, Jr., Sam Hornish, Jr. and Justin Allgaier round out the top 5 in the standings.

*Sam Hornish, Jr.* showed just how much he is learning from his step back into full time NNS competition. Not only did Hornish finish fourth on Saturday at Loudon, but he’s quietly maneuvering himself into position to contend for a championship should the top three stumble. And how about props for *Ricky Stenhouse, Jr.* who finished fifth in the Loudon heat after battling strep throat all week? Stenhouse climbed from his car after the race and passed out on pit road…but he finished the race and maintains his top-3 points position, actually gaining two markers on the lead. Even in fifth place, Stenhouse may have had the most impressive performance of the day, all things considered. Stenhouse was treated and released from the infield care center following the race.

*Danica Patrick* was having a decent enough day, considering her last brush with the Magic Mile, but it didn’t last long enough for the checkers to fly. Patrick made it three-quarters of the race without incident, but then she got loose, slid up into Jason Bowles, damaging both the No. 7 and the No. 81. *Kyle Busch* was the favorite for the win, but fuel pressure sent the No. 54 to the garage twice for repairs, ending any hope for Busch. *Danny Efland* was having a solid day when his No. 4 machine was spun in traffic and the wall ended his day 84 laps shy of the checkers.

*Travis Pastrana* continues to look like he should have stayed in rallycross as an early racing incident in which Pastrana was clearly driving over his head sent him to the pits with a flat tire, costing the No. 99 a lap. Pastrana finished it off on lap 81, when he got hard into the Turn 4 wall after blowing a right front. *Cole Whitt* was the fastest driver in the first practice session of the weekend, and Whitt qualified 10th, but it was Whitt’s bobble that ended Danny Efland’s day and saw Whitt finish 18th, the last car one lap down, instead of the top 5 result he seemed headed for when the weekend began.

*Underdog Performer of the Race: Mike Wallace* While a top-15 run might be something that some teams would turn up their noses over, for Wallace and his underfunded operation, it’s a solid result. It comes a week after Wallace was contending at Daytona before being part of a multi-car crash. Wallace’s recent performance shows the value that a veteran driver can have for a struggling team, and Saturday’s finish tied his team’s best run of 2012. He’s currently 15th in driver points as well. While Wallace isn’t setting the world on fire, he’s helping to keep Johnny Davis’ small team afloat.

Cup regulars scored 4 of the top 10 finishing positions, occupied 9 of the 43 starting positions in the field, and took home $158,438 in purse money.

* Kyle Busch entered the day with three straight wins in the summer Nationwide Race at New Hampshire, but any hope of a fourth was dashed early as Busch went to the garage with fuel like issues and would not return until after laps had passed. Prior to Busch’s second win, there had been no repeat winner in 23 races at New Hampshire.
* Even after two straight weeks of failing technical inspections and the subsequent penalties, Austin Dillon sits second in points, just three out of the lead…perhaps NASCAR needs to give points penalties that actually penalize a team if they want to get a message across.
* Kevin Harvick had harsh words for Amber Cope on the ESPN broadcast after the race, saying that “She wants to be Danica Patrick but she can’t even hold (Patrick’s) helmet.” Cope was already multiple laps down when Harvick, the race leader, came up behind her and she held the No. 33 up, forcing Harvick to lift and allowing Brad Keselowski to make what would prove to be the winning pass. With performances like Cope’s happening in a national touring series, perhaps it’s time for NASCAR to review its licensing policies for the top three series.
* Despite having four DNF’s in eight races for RAB Racing this year, Kenny Wallace still has a better average finish than Travis Pastrana. Sure, Pastrana brings dollars, but how much does that matter if the team has to spend them all to repair the cars Pastrana breaks?
* It’s hard to make an accurate guess at the attendance at NHMS because fans were spread through the sprawling grandstands, but even so, it looked like a mediocre draw. Between the heat and the large number of Cup drivers in the race, were walk-up numbers hurt? It’s too bad, because fans were treated to one for the ages in the day’s undercard race, where seven-time #NASCAR Whelen Modified Tour champion Mike Stefanik edged 2011 series champ Ron Silk by inches (the margin of victory was .003 seconds, which, believe it or not, isn’t the closest finish in the series) after the two swapped the lead on nearly every one of the closing laps. The real shame was that if you weren’t there, you didn’t see it, as WMT races are not broadcast live.