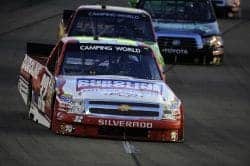 Hello, race fans. Welcome back to Couch Potato Tuesday, where TV critiques are the name of the game. I’m back after a one week hiatus, which was brought on due to my trip to Daytona to cover the Coke Zero 400. This week, we’ll be reviewing the Sprint Cup and Nationwide Series race telecasts from New Hampshire Motor Speedway, and the Camping World Truck Series telecast from Iowa Speedway.

*Before we start*, I want to mention a couple of things. Firstly, as you are likely well aware of, ESPN’s Jamie Little is currently eight months pregnant and is now officially on maternity leave. However, this leave might not be as long as you think. On her Twitter page Sunday night, Little tweeted that she’s “…sad I’ll miss some races but I’ll be back for [the] final 11!” This means that she plans on returning to pit road at Richmond in September. Until then, Shannon Spake will likely take her place in the pits.

Also, a significant portion of Brian France’s press conference in Daytona was centered upon TV…when he wasn’t touting “glass dashboards,” whatever that is. I’ll try to work some of that in as well.

On Saturday night, the Camping World Truck Series returned to action at the Iowa Speedway near Des Moines for a 200-mile race. All of the usual guys were in place on-air.

In recent weeks, the Setup has transitioned more towards features and away from actually interviewing anyone prior to the race. They need to figure out that happy balance.

The primary feature that aired was a look at Eddie Sharp Racing, team owner Eddie Sharp, and drivers Justin Lofton and Cale Gale. Admittedly, I had already seen this feature before. I thought it had previously aired on another edition of the Setup, but my notes for this season indicate otherwise. More than likely, it was already shown in full on NASCAR RaceHub earlier last week.

Another feature focused on Mitch Way, Car Chief on Kyle Busch Motorsports’ No. 18, who just so happens to be a native of Iowa. The feature talks about how Way got into NASCAR, his past experiences with racing (including his own driving), and opinions of Way from Rick Ren and Eric Phillips. This was a nice piece since the crew members, especially in the Camping World Truck Series, work rather anonymously. Its good to see one of them get the spotlight every once in a while.

There was also a rather unusual piece where Rick Allen (a native of Nebraska) took on Joey Coulter and Iowa Speedway Track President Stan Clement in a corn shucking contest. Not a misprint. I know Iowa’s a big corn growing state, but that just seemed out of place.

SPEED’s race telecast was more of what we’ve become used to from them this season. There was plenty of action for position that was shown and the race was quite exciting. You generally knew what was going on all through the field. As sad as this sounds, that’s not always the case with Sprint Cup and/or Nationwide Series telecasts. I get lost at times watching telecasts, and I’m the guy that watches races with a notebook in hand.

Post-race coverage was pretty decent. SPEED brought viewers seven post-race interviews, an interview with the winning crew chief (Butch Hylton), and checks of the unofficial results and point standings before they left the air.

Overall, I definitely enjoyed watching SPEED’s telecast. The booth was right on their game and made the race exciting to watch. I guess that’s all I really need.

Saturday afternoon brought the Nationwide Series to New Hampshire for their 200 lap event. A special, one-hour edition of NASCAR Countdown was on tap.

Of course, since this was another race attempted by Travis Pastrana, ESPN could not resist having a feature based on his exploits at Charlotte. You might remember just how much of an adventure that weekend was for Travis, not just in the Nationwide car, but in his GRC Dodge Dart as well. Regardless, the piece was well done.

The rest of Countdown was dominated by pre-race analysis from the Pit Studio (conveniently located on the outfield road course). This featured a recap of the Subway Jalapeno 250 from Daytona, and a look back at the various incidents caused by Ricky Stenhouse, Jr. There were also ten pre-race interviews, far above normal for ESPN. Good to see.

The race broadcast was still fairly well-focused on the storylines that ESPN wanted to further. The Pastrana storyline didn’t last all that long due to his tire problems and eventual huge crash that put him out of the race. Danica Patrick got her usual amount of coverage, while much of the rest was centered upon the drivers towards the very front of the race (Brad Keselowski, Kevin Harvick, Austin Dillon, Stenhouse, etc.). Most everyone else didn’t get much exposure.

Post-race coverage was fairly decent. There were five post-race driver interviews, along with an interview with the winning crew chief (Jeremy Mullins). There was also a brief interview with winning car owner Roger Penske. My best guess is that Ricky Stenhouse, Jr. would have been interviewed as well, but he managed to pass out right after getting out of his car. ESPN dispatched Dr. Jerry Punch to the Infield Care Center to give viewers an update on Stenhouse’s condition prior to the end of the broadcast.

There was also a fair amount of coverage given to the Harvick-Amber Cope conflict with replays and Harvick’s comments that basically threw Cope under the bus. Ouch. Hate to be Amber Cope right about now.

I thought that the telecast was OK to watch, but ultimately nothing to write home about. Sprint Cup returns in a couple of weeks, so I would expect ESPN to concoct the best telecast possible for Chicagoland next week so that they’ll be ready for the Sprint Cup onslaught.

On Sunday, TNT returned for their sixth and final Sprint Cup telecast of the year. However, they had to do it down a man. Marty Snider was hospitalized last week with a high fever that reached nearly 105 degrees. Serious stuff. He’s out of the hospital now and will be fine, though. As a result, TNT had to make do with just three pit reporters on Sunday.

Countdown to Green consisted of a fair amount of discussion about the ongoing A.J. Allmendinger situation (the only thing that can be reported now is that the “B” sample testing has begun). Of course, when the pre-race show aired, this had not happened yet, so much of the discussion consisted of the same conjecture that had been repeated all week on NASCAR RaceHub and other NASCAR-related programming.

The final NASCAR Generations piece was centered upon racing hand-me-downs. Here, Jimmie Johnson talked about racing cars that Jeff Gordon had run the previous year during his rookie year in 2002. As you may remember, Gordon won the 2001 Winston Cup Championship with those cars. Pretty good hand-me-downs, don’t you think? Kyle Petty talked about getting old engines (and sometimes, experimental and incredibly illegal engines) from his father Richard in the early 1980’s.

Another piece saw Rick Hendrick give Ralph Sheheen a tour of what he calls his “Heritage Center.” This is where Hendrick keeps cars that mean a lot to him, from his first personal car to classic vehicles that he’s bought at various Barrett-Jackson auctions. According to the “Hendrick Motorsports facility map”:http://www.hendrickmotorsports.com/fans/facility/, this is a separate building on the sprawling property where the shops are located. Problem is that it is somewhat unclear as to whether this place is open to the public. Looks sweet, though.

Unfortunately, Sunday’s broadcast (and much of TNT’s Summer Series) was notable for the amount of commercial interruption that was involved. Apparently, 56 minutes of commercials aired between the start of the race and the checkered flag. Now, I don’t calculate commercial times during cautions. However, I did come up with 48 minutes of commercials under green. I think that’s the second highest all season, behind the hour-plus of green flag commercials during the Coca-Cola 600.

Having all that many commercials in play there makes it very difficult to get any kind of a flow going. In fact, it is hard to show much of anything if you’re coming back from a three minute commercial, talking about a couple of different things, then right back for 150 more seconds of ad time.

Now, this may sound crude, but its a lot like the episode of Family Guy entitled “Stewie Loves Lois.” This was the one when Peter Griffin gets Dr. Hartman fired for equating a prostate exam with rape, then has to make constant trips to the bathroom due to a legitimate prostate issue. The constant interruptions to urinate makes it very difficult for Peter to function normally. That’s the feeling I got on Sunday. Now, I understand that they have to have the commercials in order to pay for the telecasts, but this is overkill. And to think that TNT has _not_ reached the maximum allowable amount of commercials, as we learned from Brian France.

In addition to the commercial issues, there was an extreme focus at the front of the field. Therefore, you couldn’t tell what was going on outside of the top-5 or so for much of the race. There were also zooming issues. For example, on Lap 28, Kasey Kahne made a pass on Denny Hamlin for position. I couldn’t tell you how he did it because the camera was zoomed in so far that I couldn’t see anything develop.

Despite all the bad things I mentioned above, the commentary was generally pretty good. Petty is pretty good to listen to, while Alexander is finally coming into his own as a play-by-play man. However, getting only six attempts a year does hurt him. He has to take a couple of weeks to get back in the flow.

Post-race coverage was substantial by TNT standards. Usually, when races run a little short, they’ll cut their post-race coverage short so that they have more content for the RaceBuddy-exclusive show. That wasn’t the case on Sunday. TNT provided viewers with eight post-race interviews, as well as checks of the unofficial results and point standings. There was also some post-race analysis and a farewell before the coverage wrapped up. The RaceBuddy show did not contain any additional interviews, but did have additional post-race analysis.

That’s all for this week, folks. This weekend, the Sprint Cup Series takes their second and final weekend off of the season (oh noes!). Don’t worry, there’s still plenty of racing action that will quench your thirst for action in Sprint Cup’s absence. The Nationwide and Camping World Truck Series will both be in action at Chicagoland Speedway, with the ARCA Racing Series as tertiary support. Meanwhile, the Izod IndyCar Series will be in Edmonton, Alberta.