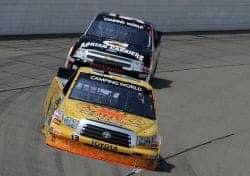 Excluding a talented (and well-funded) rookie following in his elder brother’s footsteps, the NASCAR Camping World Truck Series rookie battle has been less than spectacular in 2012. Few drivers who declared for the Rookie of the Year distinction prior to Daytona have stuck around for all nine races, with some early bright spots (see: John King, Jeb Burton) succumbing to sponsorship woes.

So, aside from one Ty Dillon, where can Truck Series fans look for budding talent (aside from the Nationwide Series, of course)?

Jeff Choquette (in the black truck) had an impressive 11th-place run in his Truck Series debut, racing with the best drivers in the series.

There’s a lot of hullabaloo around Kyle Larson, an Earnhardt Ganassi development driver who made his Truck debut for Turner Motorsports last month with a 10th-place finish at Kentucky–and time will certainly tell if Larson has what it takes to compete with the big boys on a higher level.

But after last weekend’s series race at Iowa Speedway, I’m cautiously optimistic about a guy we heard about a few times on the race broadcast: Jeff Choquette.

From the time the trucks rolled off the haulers in Iowa, Choquette was the talk of a crop of five potential first-time Truck racers (plus Todd Shafer, returning to the series for the first time in almost six years), though given his competition, even the slightest positive could have set him apart. Hopefuls Natalie Sather and Ben Reynolds failed to qualify for the event, and Justin Jennings and Travis Miller, while able to keep their noses out of trouble, were non-factors.

Choquette, however, was quick from the get-go. He was certainly an eye opener after a fifth-place run in the weekend’s first practice, beating out scores of well-funded teams. That said, rookie contenders Dakoda Armstrong and John Wes Townley, who have had fairly unspectacular if not downright abysmal seasons so far, were among the top 10, so little could be taken from Choquette’s performance just yet. Scoring the eighth-best time in final practice, however, helped matters.

What was key to remember in the situation (especially compared to Armstrong and Townley, who come from established organizations) was that Choquette and his Adrian Carriers Racing team had never been on the track in Truck Series competition prior to Iowa. Aside from whatever testing was done and Choquette’s appearance in Roush Racing’s Driver X TV show, this was it.

So to run so well (albeit in practice) at one’s first race is no easy task, especially with a team also making its first rounds. The Adrian Carriers team races predominantly in late model events, most recently in the ASA Midwest Series with Choquette. Though there was obvious racing experience there, the jump from late models to a Camping World truck is no walk in the park.

Come time trials for the American Ethanol 200, team and driver were only able to manage a 17th-place starting position, a bit of a far cry from the practice results. And that’s really where Choquette remained for much of the race. Granted, two separate pit road penalties didn’t help matters, each time sending the No. 97 to the tail end of the lead lap.

But that’s not necessarily a bad thing, is it? In an age where many rookies seem to go for broke and often wreck their ride in the process, Choquette (and, as said, Miller and Jennings) kept out of trouble. He slowly made up the spots he would lose from penalties and was able to remain in contention for at least a top-20 finish all night long.

By lap 174, Choquette was up to 14th. Race’s end found him one spot outside of the top 10 in 11th, giving him a respectable finish for his first race in the series.

Of course, it makes sense that Choquette would not only make his debut here, but also run quite well. The Adrian Carriers team is based in Milan, Illinois–just across the border from Iowa. And the 25-year-old Choquette’s first ASA Midwest race was at Iowa Speedway. The result? First place.

It doesn’t come too often these days that a younger driver with a smaller, unproven-in-the-series team is able to run well out of the gate. I’m reminded of Greg Pursley and David Mayhew in 2010 with some of their touring division organizations as the most recent examples. In NASCAR’s top-tier series, where the gap between the elite and the have-nots can be staggering and only seems to be growing, it’s nice to see the underdog prevail.

Unfortunately, it may be a bit before we see the No. 97 and Choquette back in Truck action. According to the driver on Twitter, the team’s next (and only) event will be, again, at Iowa, when the trucks revisit in September. This is of course barring any one-off deals with any teams that might have taken a liking to the Florida driver and can work around his schedule with his usual organization.

But at the very least, it looks like we might have a man to watch in the Iowa race come September. Maybe even on into the future in the Camping World Truck Series.