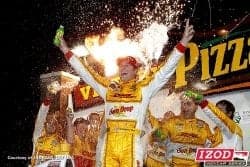 Ryan Hunter-Reay is in many ways the poster child for the plight of the American driver in open wheel racing. He currently sits atop the driver standings in the IZOD IndyCar Series and if he can hang on to win the championship, it will not only be the realization at last of the wealth of potential Hunter-Reay has always shown, but perhaps it will also signal the comeback of the American driver.

Ryan Hunter-Reay has won three IZOD IndyCar Series races in a row and is trying to become the first American to win an IndyCar title since Sam Hornish, Jr. in 2006.

Hunter-Reay, of course, shares the three wins in a row distinction for 2012 with Will Power, but Hunter-Reay’s three perhaps make a stronger case for a championship than Power’s. Power won three road / street course events early in the season and took the points lead. Since then he has stumbled badly through the subsequent six races, scoring only two top ten finishes. Four of the six have been oval tracks, where his best was an eighth place result at Texas. Power has never been known as much of an oval racer and talk at those tracks is usually of “trying to get through it.”

For Hunter-Reay, the three wins have come on three very different tracks. Two are ovals but the flat Milwaukee Mile is different from the 0.875-mile compound banked Iowa Speedway. The Toronto street course is a different animal altogether. This is par for the course for Hunter-Reay, who has eight Indy car victories total, four on ovals and four on road / street courses.

“That’s what IndyCar has always been for me … I just loved the fact that every weekend you see the cars on a different type of track and it’s constantly changed up,” says Hunter-Reay. “To do well in the series and in this championship, you’ve got to kind of master it all.”

Hunter-Reay has been successful on both kinds of tracks. With two road courses, two street circuits, and an oval remaining, Power has to make up 34 points on a guy who can do it all. If Hunter-Reay can win the championship, it would be a popular title for a number of reasons.

First, his Andretti Autosport team is not Ganassi or Penske, the two teams many fans are tired of seeing up front. It might be of interest to note, however, that of the last ten titles, Ganassi has five, Andretti Green (predecessor to Andretti Autosport) has three, and Penske and Panther have one each.

Not only is he not driving for Ganassi, but he’s not Dario Franchitti. Ask Jimmie Johnson how fans feel about drivers who win lots of championships, especially consecutively. Franchitti has been the champion four of the last five years, including the last three in a row. The year he didn’t win it he was racing in NASCAR.

Sam Hornish, Jr. won the championships for both Penske and Panther and is the last American driver to win the title, in 2006. He is also the only American driver to win it in the last ten years. This is important. American racing fans are an unusual bunch. F1 pundits will tell you that the key to growing an American audience is to have a successful American driver on the circuit, otherwise American fans are mostly not interested. It was one of the chief complaints that sent Indy car fans to the exits too and brought about the dreaded split.

For Hornish, it was about proving himself and his series (the IRL at the time), which was sometimes seen as a joke, full of nobody drivers no one ever heard of just for the sake of having American drivers, that is until Hornish beat a pair of Penske drivers for the 2002 title. But then the wave of foreign drivers arrived and only Hornish has made it back to the top since, this time driving for Penske. He could be seen more as the last hurrah of the old IRL than as the promise of the future.

Hunter-Reay would be something different. During that same last ten years, Ryan Hunter-Reay’s career path sums up exactly the challenges faced by many American drivers trying to race in an American open wheel series. Hunter-Reay won six national karting championships, the Skip Barber Formula Dodge National Championship in 1999, Rookie of the Year in 2000 in the Barber Dodge Pro Series followed by two wins in that series in 2001 before moving up to the Toyota Atlantic Series in 2002 where he finished sixth in points, won three races, and led the circuit in laps led, poles, and fast times. He won the Worldcom “Rising Star” Award for this performance. He was viewed as a star on the rise.

Until he tried moving up to the Champ Car World Series in 2003. Although he generated buzz, he always seemed to get overlooked for the good rides. He drove for low budget and underfunded teams like American Spirit, Herdez Competition, and Rocketsports Racing. And he STILL managed to win races. And sponsors still managed to ignore him almost completely. It got so bad that Rocketsports released him for the last two races of 2005 and put a pay driver in the seat instead.

He sat out 2006 and half of 2007 without a ride. One of the most frequent questions during this time was “Why doesn’t Ryan Hunter-Reay have a ride? Why can’t he get a sponsor?” He became the example of what was wrong with American open wheel racing when an American driver with this much potential couldn’t get any financial support.

In 2007, Hunter-Reay joined the IndyCar Series with Rahal Letterman Racing, replacing a driver that wasn’t working out at midseason and stayed there through 2008, picking up another win along the way, but ultimately it was more of the same. Rahal Letterman released him in 2009 due to lack of sponsorship and he moved to underfunded Vision Racing and then to A.J. Foyt Enterprises as a sub for injured Vitor Meira.

Just before the 2010 season, Hunter-Reay secured a deal with Andretti Autosport for a partial season that would run through the Indy 500. Then he went and did it again: he won. Maybe Michael Andretti was the difference this time. He was determined to hang on to Hunter-Reay beyond the end of their part time deal and managed to find the sponsorship to keep him for the rest of the year. He went on to sign him to drive the No. 28 DHL/Sun Drop car through 2012. Right now that looks like it was a brilliant move.

In the meantime, the complexion of the series has changed somewhat as well. Now there are seven American drivers running full time in the IZOD IndyCar Series, more than any other nationality. The question of “Why doesn’t (fill in American driver’s name here) have a ride or a sponsor?” is heard less often and never with Ryan Hunter-Reay’s name involved. Unlike for Hornish, there would be no question of who he beat because Hunter-Reay is running against all the best racing in the one and only premier American open wheel racing series. If he can hang on to win the championship, Ryan Hunter-Reay would end up exactly where everyone expected him to when he first arrived on the scene. He’s been the perfect representation of the plight of the American driver over the past ten years, maybe now he’ll be the perfect representation of the return of the American driver.