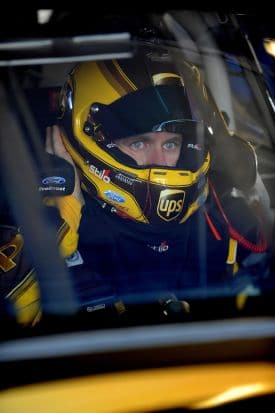 *Is it too late, too little for Carl Edwards’ season?*

Bob Osborne out. Chad Norris in. Citing health reasons, Osborne has stepped down as crew chief for the No. 99 team and will become senior member of the organization’s management team. Meanwhile, Norris moves to the top of the pit box of a struggling team. No pressure!

Unless Carl Edwards and new crew chief Chad Norris find amazing chemistry, the change is not likely to help Edwards’ chances to make the Chase.

The thing is, I doubt if Norris can really make a difference. With only seven races left until the Chase is set, unless Norris and Edwards have an instantaneous chemistry tantamount to that of Jimmie Johnson and Chad Knaus, we likely won’t see a change.

Here’s the thing. Edwards is already 46 points out of the Chase—basically an entire race—and is continuing to slide. With an already uphill battle to climb, and a glaring goose egg in the “wins” column, without a miracle fuel mileage or rain victory, it’s looking less and less likely that we’ll see the 2011 runner-up to the championship in this year’s playoffs.

*Does the Amber Cope incident make it more difficult for other female drivers to gain credibility?*

Indirect compliments paid to Danica Patrick by Kevin Harvick aside, Amber Cope’s name was effectively dragged through the mud last Saturday after Loudon. If we’re being honest, that wasn’t the first (nor will it be the last) time that a lapped car influenced the race. It also isn’t true that the only drivers who ever cause issues on track are females.

That being said, female drivers are under a microscope and at times marginalized just because they are, well, female. I’m not saying Harvick wouldn’t have verbally slammed anyone who prevented him from getting that win, male or female. Past history says that he absolutely would! Yet, the fact that she was female and his choice of words, made it much worse than it otherwise would have been.

I’m not saying this because I feel like I need to defend female drivers. Their ability will speak for themselves. You can’t tell if a driver is male or female once that helmet is on, and I thought Cope was at fault for what happened. However, it seemed to me that Harvick was taking the fact that she was female and running with it. The Danica Patrick references and the references to Cope as “it” were likely heat of the moment, yet still inappropriate.

But that’s beside the point. As I said before, you can’t tell if a driver is male or female once they are on the racetrack. Yet, for whatever reason, they seem to be scrutinized moreso than the males. Every mistake they make is blown out of proportion and picked to pieces. Sure the same could be said for success, but that’s an unfair amount of pressure that incoming male drivers don’t have to face. In fact, it seems to me that unless they are consistently in the top 5, female drivers are usually not taken seriously. And Harvick’s comments don’t make that any easier.

Don’t get me wrong, I’m not saying the Cope twins are at all credible or talented racers. They’re not. But that doesn’t mean that drivers like Danica Patrick or Johanna Long—who are competing in this weekend’s Nationwide Series race—aren’t or can’t be. Are they the best drivers out there? Absolutely not. But their credibility and place on the racetrack shouldn’t be treated any differently than their male counterparts. _That’s_ the point.

While the new one series only points rules and a more focused approach to the Chase by Cup drivers has this phenomenon happening less and less, it’s still an ongoing point of discussion. Cup Series drivers in NASCAR’s lower tier series has been an constant debate for years, but so far the only thing being done about it is a new points format.

However, with the sport already trying to bounce back from attendance issues, spectators and viewers don’t seem to share near as much enthusiasm for smaller races without the stars. Attendance is typically sparse, and while ratings have been fairly steady for the races this year, the numbers aren’t altogether impressive. The stories don’t get nearly the reads (except for controversy) and it just doesn’t feel like the enthusiasm is there.

It just seems strange to me how when there are Cup Series drivers in the race, people complain yet still watch. Yet when they’re gone, it’s hit or miss. It just seems to me like the passion for argument is there, but the enthusiasm for follow through disappears.

*Do the Nationwide and/or Truck Series need a Chase?*

Don’t shoot! I have a point, I promise.

There are some who will _never_ accept the Chase in the Cup Series where it already exists, let alone as a possibility for the sport’s developmental grounds.

But here’s where I’m coming from. Last year’s Sprint Cup Series championship was a thrill to watch, and I can only hope that this year will be half as good. However, that sort of down-to-the-wire battle between two of the sport’s stars wouldn’t have been possible, or at least as likely, without this system. No it isn’t perfect, but it usually provides some excitement at a time in the sport where competition is as tight as ever.

Right now, the Cup Series points deficits don’t matter except for right around that precarious position at the bottom of the top 10. Eventually they will be reset and the drivers will be on a fairly even playing ground again. As maddening as that may be to some of you, it sets everyone up for a last ditch effort for the title. A “second chance” for those who didn’t get as strong of a start as others. Unless you’re being difficult for the sake of being difficult, it’s fun to watch more often than it isn’t.

Now look at the other two series. At _most_ both series will have a four man race, and that’s stretching it in both cases. Unless things drastically change over the next couple of weeks, it will likely be no more than two or three in the running come Homestead. In the Cup Series, while more often than not it also comes down to two, has the potential to include up to five or six if the competition stays tight enough.

That chance is never even had in the Nationwide and Truck Series, and most competitors are forgotten about in the last few races of the season. We talk about spotlighting Nationwide and Truck Series regulars, but when it comes down to Homestead, nobody cares about them anymore. A Chase system may very well open up that option to them, provide more publicity, and possibly funding for more drivers. In other words, I believe it would do more good than bad.

It likely won’t ever happen, but it’s something to ponder while watching the two series this weekend.