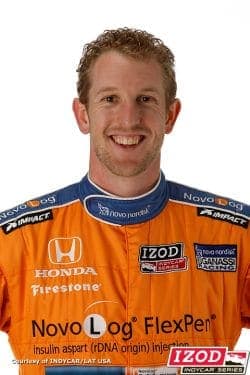 The IZOD IndyCar Series continues it’s trek through Canada this Sunday with the Edmonton Indy. The biggest and perhaps most curious news coming out over the past week was the revelation from IndyCar race director Beaux Barfield that the sanctioning body was heavily considering introducing an “overtime format” to IndyCar racing, similar to that of NASCAR’s Green-White-Checkered finishes. IndyCar officials will make a decision over the off–season as to whether or not GWC’s will make their way to the sport. Another very important piece of IndyCar news this week actually came from Washington DC. The U.S. House of Representatives voted in favor of letting the nation’s military branches continue to sponsor sports teams. This is great news for IndyCar’s Panther Racing, who has a very lucrative sponsorship deal with the United States National Guard.

Edmonton’s City Centre Airport is the site for this week’s race, and the 2.224 mile, 13 turn street course is unique among IndyCar tracks as it is the only circuit that takes place on a series of airport runways. Given the nature of the long airport runways that the track runs on, the circuit features exceedingly long straightaways with tight hairpin corners, meaning that drafting and out-braking will be the keys to passing and running up front. Unlike most street circuits, Edmonton usually puts on a great show, and its locale makes it a unique and storied favorite among IndyCar fans.

With his third win in as many races, Ryan Hunter-Reay vaulted to the top of the IZOD IndyCar Series point standings after the race in Toronto. Hunter-Reay has a decent 34-point advantage over second place Will Power, who has struggled mightily as of late despite a quick start to the season. Power’s teammate Helio Castroneves sits third in the standings and is only 46 points out of the lead. Scott Dixon and James Hinchcliffe round out the top 5 in the series standings.

Chevrolet has extended its lead in the manufacturer’s standings over the past three races on the strength of Ryan Hunter-Reay’s three consecutive victories, and the Bowtie Brigade has opened up a 12-point advantage over second place Honda. As per usual, Lotus sits a distant third, most likely pondering why they even entered the sport in the first place.

Charlie Kimball is familiar to viewers for the Novo Nordisk commercials but he scored a career best second place finish last time out in Toronto. Photo credit INDYCAR/LAT USA.

Charlie Kimball is one of those drivers whom you often forget about when you turn on a race on Sundays. Most folks know him as the quiet but personable guy with Type 1 Diabetes who is always in the Novo Nordisk commercials. That, of course, changed last week in Toronto, where Kimball seemingly came out of nowhere to deliver an impressive second place result, the best of his still young career. Kimball has quietly made a name for himself this season and currently sits a respectable 12th in the standings. His development from a timid rookie in 2011 to a confident sophomore driver in 2012 has not gone unnoticed, and he is this writer’s pick for Most Improved Driver of the Year. Should Kimball continue to have days like he did two Sundays ago in Toronto, he will eventually find himself in Victory Lane.

James Hinchcliffe is my pick this week. With how strong Andretti Autosport is running, it only seems fitting the Hinch will get a win before the Canadian sweep is over with. Toni Montgomery is going with Helio Castroneves who is always strong on this track. Castroneves has yet to win at Edmonton but has finished second three out of the last four years.

An interesting piece of news that surfaced this week in an issue of the magazine Autosport was the revelation that the Italian Coloni Motorsport team, one of the more well-known teams in European Formula racing, was in discussions to field an IndyCar team in 2013. This would be great news for IndyCar racing if such a deal were to come to fruition, as it may lead to more internationally renowned race teams taking a look at IndyCar.

After the race in Edmonton, the IZOD IndyCar Series will have a week off before heading out to Lexington, Ohio on August 5th for the Honda 200 at the Mid-Ohio Sports Car Course. Mid-Ohio is one of the greatest venues in all of American road racing, so you can be sure that this will be a race you do not want to miss!