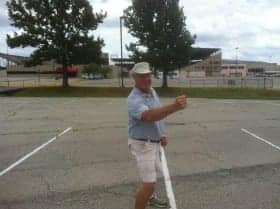 Mike Kempf, who I assume is from the Louisville area writes,

_“Do you ever hear of any interest in another racing facility in Louisville? Since you, Andy Vertrees, and Steve Stubbs are no longer here I wonder if any business folks are thinking about the opportunity in Louisville. I really miss the Fairgrounds Motor Speedway.”_

FMS was built on the Kentucky State Fairgrounds property in 1961 with a ten-year lease, which was renewed once. In 1980, the state fair board decided that auto racing wasn’t a part of their future plans and didn’t renew again. At the time, they said they wanted to build horse barns on that property. As of right now, it’s still a parking lot.

Geoff Hale, a race fan in Louisville who remembers the old Fairgrounds Motor Speedway, did some research and calculating to find the spot where he says the flagstand was.

The horse barns idea sounded logical. Stubbs, Milt Hartlauf, and I used to say that if you wanted to get any ink in the Louisville papers, you had to walk into the sports department smelling like horse manure or bouncing a basketball.

Andy Vertrees is still in the Louisville area, and I’d go back in a minute if there was a good chance another track would be built. At the time it closed, I felt we’d never see another track built that close to a major city.There have been some rumblings, and some people have plans, I’ve been told. But I’ve also been told by someone who should know that this is not the time.

Not even with that former amusement park property on the south side of the fairgrounds being vacated.
—

_Thanks for the picture of Bob(Senneker)’s car. Those cars just looked mean. It’s nice to see a stock car that not only resembled what was on the dealer’s lot, but also was probably built by a handful of guys in a one-stall garage. No four-car teams with 50 engineers with wind tunnels, just a handful of guys doing it for the love of racing and drivers that didn’t drive for points but to actually be part of it._

Chris, I agree, and I think Bob’s cars came out of Ed Howe’s shops for the most part. That wasn’t my picture, but it was a copy of one in my files that a photographer I know personally gave me. I don’t know how it came to be the “property” of another web site…

_Editor’s Note: The photo in question was captured from the website “StockCar.RacersReunion.com,”:http://stockcar.racersreunion.com/ a site featuring many rare photos of vintage stock cars from all major racing series. There was no clear credit given on the photo in question, as many are submitted to the site by fans and drivers._

—
And finally, a comment from Andy DeLay, one of the principals on “Burning Rubber Radio,” who took exception to my peeve about just saying “Cup” in reference to the top series in NASCAR:

_There are ads all over the car, the uniform, the race name, the track name, the tickets, etc. I’m not going to encourage more by giving them a free plug every time I mention the series! Is it Citibank Major League Baseball? The Prudential NFL season? No, we have enough commercialism. Stick & ball fans mock the never-ending sponsor mentions in motorsports. Winston worked hard and put NASCAR in front of a lot of eyeballs. They deserved some respect. Still, I wish they’d go back to Grand National and Grand American._

Andy, you’re a friend of mine, but there’s no way I could disagree with you more. For one thing, you’ve also been a competitor, and I don’t think you would have taken kindly to me not mentioning your car’s sponsor when you were on the track at Corbin Speedway. With your radio show and your racing experience, you should realize as well as anyone that a sponsor is the hardest thing to find and the easiest thing to lose.

In the stick & ball sports, they’re not doing a lot of mocking as they sit in those sponsor-named stadiums which wouldn’t be there without that kind of support. If you really feel this way, I don’t suppose you’ll mind when, for the rest of the season, I refer to your sponsored series as simply the “Corbin Speedway Mini-Stocks” instead of the “Burning Rubber Radio Mini-Stock Series.”

I worked several years for Bob Daniels, a man who appreciated the value of a sponsor, but who also did his best to keep the tail from wagging the dog. He didn’t agree to all of their demands, but naming rights were something he considered to be their prerogative, and to be used.

After all, that’s what they’re paying for.