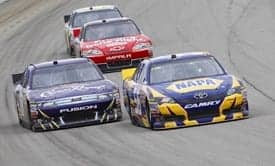 *ONE: Where’s the Development Opening at Penske Racing?*

Yes, Ryan Blaney had a hell of a Nationwide debut at Richmond earlier this spring. Yes, the younger Blaney has all the makings of being the hottest prospect the 2012 season has found yet. But the question has to be asked: Why, exactly, is Penske Racing in the market for his talents?

Right now, the team has one seat up top in flux–the beleaguered No. 22 car. Sam Hornish Jr. seems to be all but a lock for the seat the remainder of this season (the chances of ‘Dinger’s test results coming back clean are about the same as Joe Nemechek running at the finish of a Cup race). He’s the safe choice for sponsor Shell/Pennzoil and a longtime Penske loyalist that has made his desire to return to Cup racing no secret.

But for 2013, well, Hornish may be a feel good story, but he’s hardly set the world on fire in any Cup car he’s ever driven, his two weeks in the No. 22 this season included. Even on the Nationwide side, as much improved as he has been both last fall and through the 2012 campaign, he’s still an afterthought in the NNS’ three-car title chase with no race wins to show for his efforts in the No. 12 car. If performance and statistics mean anything, Hornish will be back in the Nationwide Series for 2013, and the next driver of the No. 22 car will have to be an outside hire.

Which begs the question: Where does Blaney fit into the mix? Because one Parker Kligerman is making noise on the Truck Series side–a longtime Penske protégé that came oh so close to winning the 2009 ARCA title racing for Cunningham Motorsports–and who sits in the top 5 in points with Brad Keselowski’s team despite being the only top-tier Ram entry in the field.

It’s a great short-term move for Blaney to take a limited schedule with Penske. It’ll be the best ride he’s had in big-time NASCAR. But either he or Kligerman need to be thinking long-term because Hornish isn’t going to open up a Nationwide seat with a promotion to Cup.

Martin Truex Jr. is coming into form and looking at a likely Chase berth this season, proof positive that multiple years in Nationwide racing did the Jersey-native plenty of good.

Austin Dillon is looking an awful like Martin Truex Jr. did in his first full Nationwide campaign back in 2004…that is, making it look easy. Despite being a rookie, Dillon’s talents are on display the same way they were winning the Truck title a year ago; composed, consistent and contending weekend after weekend. But for all the strength that the No. 3 has shown this season, owner Richard Childress has already confirmed that Austin will be back for the 2013 season in Nationwide competition while running select Cup races to maintain his rookie status for 2014.

Look at the last two drivers that returned to full-time Nationwide racing despite having won the championship the year before: Dale Earnhardt Jr. and Martin Truex Jr. Both stayed in AAA, both won a second championship, and both have gone on to enjoy long and successful Cup careers. Junior is a 19-time Cup winner and Daytona 500 champion, while both he and Truex are primed for Chase berths this year. Seat time before moving to the Cup ranks is a proven system. It works.

It appears that RC has a plan in place for his grandsons and the results are showing.

Speaking of that same RCR camp, an interesting story in the Sporting News noted how Truck Series regular Joey Coulter is working towards an engineering degree at UNC Charlotte despite racing full-time in the No. 22 Truck this season. That’s the polar opposite of teammate Ty Dillon, who left school behind to focus on a fledgling racing career.

He may not be pursuing education, but give Dillon credit for his smarts for he remarked in the same story of teammate Coulter that “he has his head screwed on right.”

Coulter’s been highly fortunate through his racing career, having a family-owned team with a big-name crew chief in Harold Holly to spend two years in the ARCA ranks before making his way into RCR’s formidable Truck program. Having said that, he’s got some real perspective to continue his pursuit of a degree in motorsports engineering, even with his driving career blossoming. For one, it’s a means to better understand the very vehicles he’s trying to make a career out of wheeling. But more importantly, it means Coulter’s going to have a career in this sport, even if the fortune that’s gotten him this far as a driver dries up.

Between the Dillon brothers and Coulter, RCR seems to be developing drivers with some real character. There are plenty of teams and young guns that’d do well to take note.

After racing full-time for half a season with the team, JJ Yeley has left the No. 49 car in favor of taking a new seat at Tommy Baldwin Racing. Though the new ride isn’t on the entry list for the Brickyard this coming weekend, it would make sense that the new car would be the No. 37, seeing as how the new team that Yeley will supposedly be driving for is being formed in a technical alliance with Larry Gunselman and the latest iteration of Max Q Motorsports.

The idea behind this, per owner Baldwin, is that he’s seeking to build TBR the same way Richard Childress Racing currently exists; not only as a race team, but as an operation capable of producing and selling race equipment to other teams out there.

This operation didn’t make a bad move in terms of picking a driver. Yeley’s been a more than adept qualifier for years now in the backmarkers dotting the Cup field. But apart from that, where to start? Gunselman the owner is practically Derrike Cope minus the Daytona 500 trophy, with a new deal and team being touted every few months or so. And as for Tommy Baldwin Racing, despite enjoying a strong 2012 season so far that saw them nearly win the Daytona 500 and enter into a technical relationship with defending Cup champions Stewart-Haas Racing, entertaining visions of being the next RCR in the racing marketplace seems premature to put it lightly. This is the same team that has full sponsorship for neither of its two Cup cars, with Dave Blaney start-and-parking as conducive to the team’s standing in the top 35. And this is a team that in over 100 Cup starts in its history has one top 5 finish to show…and that was in a plate race.

Short of being an engine program a la Tri-Star Motorsports on the Nationwide side, there seems to be a lot of big ideas going nowhere with this deal. The words “technical alliance with Max Q Motorsports” don’t fill this writer’s heart with confidence that anything substantial is to come from this. One can only hope this likely misstep doesn’t negatively impact TBR, which has otherwise been one of the few diamonds in the rough to emerge from NASCAR’s current economic downturn.

Anyone else notice that Mike Bliss is suddenly getting a teammate to his start-and-park No. 19 entry at the Cup level? Reed Sorenson’s on the Brickyard 400 entry list in an unsponsored No. 91 with the owner listed as Randy Humphrey, marking the first instance of a multi-car start-and-park team hitting the Cup Series since Phil Parsons’ Prism Motorsports operation did the deed in 2010 (though Tommy Baldwin Racing appeared to do so with both their cars at Pocono earlier this year).

Business-wise, it makes sense. The Brickyard pays well and there’s plenty of room for start-and-parks in the 43-car field. Besides, it will be good to see 47 cars taking time for the Brickyard, it’ll be one of the few races this season with a truly significant qualifying session preceding it.

But seeing this on the Cup entry list scarcely 24 hours after a Nationwide Series race that saw nearly a quarter of the field park within 25 laps is not an inspiring bill of health for the sport.

Shame, the sport really could have used a decent check-up. Between returning Cup racing to ESPN and having to sit through 600 miles of the Brickyard this weekend, things were already looking a bit sickly.