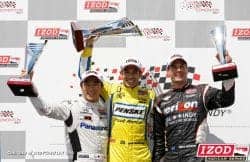 *In a nutshell:* Helio Castroneves’ #3 team delivered a brilliant pit stop with 23 laps to go to snooker the lead away from Canadian driver Alex Tagliani. From there, Castroneves never looked back, and despite second-place finisher Takuma Sato’s best efforts to wrestle the lead away from Castroneves, Castroneves held firm for the final stint of the race to grab his second win of the season. Will Power delivered a valiant drive to grab the final spot on the podium in 3rd, and Dario Franchitti and Alex Tagliani rounded out the top 5.

*Key Moment:* Alex Tagliani appeared to have the race well in hand when a series of pit stops with 23 laps to go shuffled the running order. Tagliani pitted a lap sooner than his closest on track rival, Castroneves, and despite Tagliani’s #98 team delivering a solid pit stop, Castroneves’ team was faster, and after the round of pit stops was over Castroneves had taken over the lead. Castroneves cruised home from there and delivered team owner Roger Penske his 5th win of the season.

– Charlie Kimball and Marco Andretti had a spirited battle for 18th position early in the race. Both drivers were clearly frustrated and it showed in their driving.

– Alex Tagliani made a decisive move on the first lap of the race to grab the lead away from pole sitter Dario Franchitti, and would go on to dominate for much of the event.

– Ryan Hunter-Reay was rather displeased with Will Power after the race. Power blatantly cut off Hunter-Reay while exiting pit road, and probably should have been given a penalty as a result. However, no penalty was assessed, and Power went on to finish 3rd while Hunter-Reay slumped home to finish 7th.

Alex Tagliani gets the shoutout as driver of the week after a strong performance that saw him dominate the early going in the race. Credit INDYCAR/LAT USA.

*Notable Driver: Alex Tagliani* was the surprise of the weekend, qualifying solidly in the top 5 and then dominating the first half of the race. Tagliani appeared to be untouchable throughout most of the event, and fended off a fierce early race challenge from Dario Franchitti to boot. Of course, Tagliani ended up fading late in the event, but he and his #98 team’s performance in Edmonton ought to provide a solid building block for the rest of the season going forward.

– Despite plenty of heated on-track battles and a number of close calls, the race went caution-free. This was the first caution free race of the 2012 season and the first one since Texas in 2011. Marco Andretti noted this post race and attributed it to the ever-increasing collective skill of the IZOD IndyCar Series drivers.

– Team Penske finally broke out of their slump, with all three of their drivers having much-needed solid runs in Edmonton. Will Power in particular needed a good run, and his 3rd place finish on Sunday ought to provide the momentum necessary to make a run at Ryan Hunter-Reay for the championship.

– Speaking of the championship, both Will Power and race winner Helio Castroneves cut into Ryan Hunter-Reay’s championship lead on Sunday, and it appears that Hunter-Reay’s recent string of excellence has been halted at least for one week. If nothing else, all 3 drivers appear primed to deliver a championship battle for the ages that is sure to go down to the last lap in Fontana.

“Takuma Sato and EJ Viso both in a (hashtag)indycar race and there are no yellows? (hashtag)mayans (hashtag)2012”- Tweet from racing satire account (at)TheOrangeCone

“Push to pass (at)INDYCAR tags has 85 second left, Helio has 112 and Dario has 98 seconds. Getting exciting!”- Some mid-race commentary from IndyCar CEO Randy Bernard ((at)RBINDYCAR)

“I was a little concerned to be honest. In the end, what a great strategy. I did it, if you believe it, it was so awesome.” -Helio Castroneves on his team’s risky but effective late race strategy.

*Whats Next:* The IZOD IndyCar Series heads off to Lexington, OH in two weeks for the Honda Indy 200 (at) Mid-Ohio. Mid-Ohio is one of America’s finest road racing venues, so you can be sure that the stars of IndyCar will put on a great show. Tune in to ABC at 1 PM EST on August 5th to catch all the action!