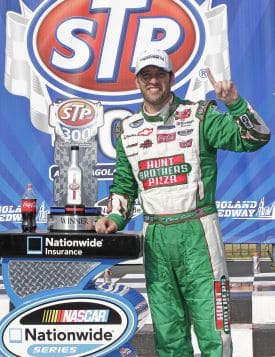 The good news for Ricky Stenhouse Jr. and his No. 6 team on Sunday was that the event marked a return to championship form. For the first time this summer, the defending champions were the class of the field.

The bad news? That still wasn’t enough. Though Stenhouse was running down Elliott Sadler in the closing laps, a late-race yellow bunched up the field and left the event up to a final restart. On that restart, Justin Allgaier gave Sadler a huge shove down the frontstretch, which provided all the No. 2 team needed to score their third win of the 2012 season and first since Bristol way back in March. Stenhouse, Allgaier, Kenny Wallace, and Michael Annett rounded out the top 5. The late caution interrupted what had been a largely green event, one of only five yellows to fly Sunday afternoon.

Sadler, who scored the victory despite battling a stomach virus in the summer heat, expanded his points lead over Austin Dillon to 11 markers; his lead is 19 over Stenhouse heading to Indianapolis. The race win couldn’t have come at a better time for Sadler, who will enter Saturday’s event as one of only a few Nationwide regulars with any experience on the 2.5-mile Indianapolis Motor Speedway.

A year ago, it would have been debatable whether or not Elliott Sadler would have found a way to win this race. Ricky Stenhouse Jr.’s No. 6 car was in a league of its own for nearly the entire afternoon Sunday; Sadler was ill. During the course of a long green flag run, the disparity between the Nos. 2 and 6 only got more pronounced. But having said that, Sadler stayed on the gas even as Stenhouse ran the field down late, staying up front when it counted on the green-white-checkered restart. One push from Justin Allgaier, and track position did the rest. ESPN’s crew post-race called it a championship-caliber performance, and indeed it was the first such this team has had in a while.

Misfortune aside, this was still a huge step forward for Stenhouse and a No. 6 team that has been in the doldrums for a month now. Intermediate ovals have long been Roush Fenway Racing’s bread-and-butter, and for the first time this summer Stenhouse capitalized. Even without the trophy, one couldn’t help but notice just how hard the No. 6 car was charging in the final two laps, all but hitting the fence on the high side seeking the win. After a month of Austin Dillon being the hard-charger, the Nationwide vets are back to center stage following Chicago.

Don’t look now, but Justin Allgaier’s riding a streak of five consecutive top 10 finishes after delivering a third-place result in an event that’s right smack in sponsor Brandt’s backyard. Though the result wasn’t the same as his fuel mileage win at the track a season ago, there was no strategy call involved in this one… Allgaier and the No. 31 team were a top 5 car all day long. Though getting back into the championship battle by the end of the season is ambitious, winning a race in 2012 is no longer an unrealistic notion for the Turner Motorsports operation.

Though he faded late, Parker Kligerman still did well to finish seventh in the Penske Racing No. 22 machine. With Ryan Blaney soon to enter the fold at Penske, results are going to be of paramount importance for Kligerman in every start the remainder of 2012.

It took Michael Annett 120 starts to score his first top 5 in Nationwide competition. Finishing fifth on Sunday, he now has three in the last four races and has surged to sixth in points.

RAB Racing had reason to celebrate on two fronts Sunday; Kenny Wallace scored his first top 5 finish since Richmond last fall, while Travis Pastrana’s 17th place finish on the lead lap equaled his career-best, a needed bounce back after an ugly outing at Loudon.

Brad Sweet finished 19th, but spun twice doing it. Not a bad result, but not exactly a ringing example of driver development performance either, especially on a day that Justin Allgaier had Turner Motorsports’ horses on display.

Brendan Gaughan ended up a victim of the late-race incident between Sam Hornish Jr. and Kyle Busch on lap 192; Hornish tried to sweep out from behind to Busch’s side on the backstretch and instead swiped right across the back bumper of the No. 54, sending that car into the fence… and right into the path of Gaughan’s No. 33. The 28th place finish equaled the worst of the season for Richard Childress Racing’s No. 33 car.

Longtime USAR veteran Benny Gordon’s return to the No. 24 car, his first start in Nationwide competition since Texas way back in April, was short-lived. It was only 60 circuits in before the transmission failed in his machine, yielding Gordon with a 31st place result, his first DNF of 2012.

Danny Efland’s day was also cut short courtesy of mechanical troubles, with engine failure sidelining the No. 4 after only 47 completed laps. Though Mike Wallace delivered a 16th place performance carrying the colors of new JD Motorsports sponsor Gerber Collision, the operation was deprived of a 1-2 punch with Efland’s woes under the hood.

Double digit start-and-parks, again. Sunday’s event saw 10 cars in the garage by lap 19, including two teams in Morgan Shepherd and TJ Bell that started the year racing the distance. (There’s also a question as to whether Tim Schendel’s No. 52 team was an 11th; the results sheet indicates that the team retired with a blown motor… but that marks six consecutive DNFs before the quarter-race mark.) When 25% of the field isn’t going to finish the race even without attrition… if it’s not a problem now, when does it become one?

Underdog Performer of the Race: Josh Richards. The West Virginia-native that for much of 2011 proved a terror on the dirt tracks of the Virginias and Maryland is proof-positive what consistent seat time can do. With 11 consecutive starts in the No. 39 car under his belt now, Richards finished in the top 20 for the third time in four races on Sunday, finishing a career-best two laps off the pace doing so. Richards’ first seven starts with the No. 39 team produced an average finish of 29.4. His last four… 20.0. Go Green Racing’s got something going in the right direction.

Honorable mention to Eric McClure for qualifying 19th, his first top 20 time trial on an intermediate circuit since Las Vegas in March of 2011.

• Think the grandstands looked empty at Chicago this Sunday? Wait till the Brickyard this coming Saturday.
• This has been noted in this column, but it is worth mentioning again: Ryan Truex finished 10th in JGR’s No. 18 car. Take away Denny Hamlin’s DNFs at Daytona and Kentucky, and that top 10 is the worst result of the season for that team. Again, just goes to show what that type of sustained success does for expectations, regardless of the driver.
• Appearing on Sirius’ Press Pass program earlier this weekend, I was asked an interesting questions in the wake of the Amber Cope vs. Kevin Harvick debacle of last weekend: does NASCAR need to undertake some kind of review regarding licensing and who is allowed on the track to race at this level? Taking a look at the field this weekend, that’d hardly serve NASCAR’s Nationwide Series too well… who would be left to fill the field?