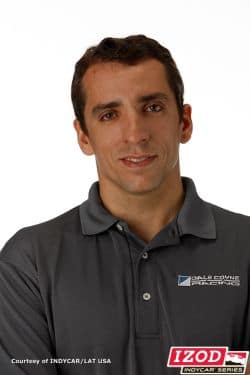 *Izod IndyCar Series: Two Drivers to Allow Fans to Design Helmets for Charity* Fans with an artistic side have two chances to design helmets that will be used during races this season and then raffled off to benefit charity. Justin Wilson and the International Dyslexia Association have teamed up to present a competition for young people with dyslexia to design the helmet that Wilson will use at the Grand Prix of Baltimore. After the race, the helmet will be raffled off and the proceeds will benefit the IDA. Wilson recently revealed he had dyslexia.

Graham Rahal will also be holding a helmet design contest through his Graham Rahal Foundation. Fans can find a pre-made helmet template and rules online at GrahamRahalFoundation.org and must submit entries by August 8th. Rahal will then select the top five designs and post them on the website for a fan vote through August 15th. The winning design will be worn during the IndyCar Series finale at Auto Club Speedway and then auctioned at Celebrity.eBay.com to raise money for Alex’s Lemonade Stand Foundation for Childhood Cancer and SeriousFun Children’s Network. _–Toni Montgomery_

*NASCAR Nationwide Series: Sadler, Stenhouse Hope to Ride Chicago Success All the Way to a Title* A year ago, it would have been debatable whether or not Elliott Sadler would have found a way to win at Chicago. Ricky Stenhouse Jr.’s No. 6 car was in a league of its own for nearly the entire afternoon Sunday; Sadler was ill, stating before the race that he only felt 60%; and over the course of a long green flag run, the disparity between the Nos. 2 and 6 only got more pronounced. Despite that, Sadler stayed on the gas even as Stenhouse ran the field down late, staying up front when it counted on the green-white-checkered restart. One push from Justin Allgaier, and track position did the rest. ESPN’s crew post-race called it a championship-caliber performance, and indeed it was the first such that this team has had in a while.

This misfortune aside, Sunday was still a huge step forward for Stenhouse and a No. 6 team that have been in the doldrums for a month now. Intermediate ovals have long been Roush Fenway Racing’s bread-and-butter, and for the first time this summer Stenhouse capitalized. Even without the trophy, one couldn’t help but notice just how hard the No. 6 car was charging in the final two laps, all but hitting the fence on the high side seeking the win. After a month of Austin Dillon being the hard-charger, the Nationwide vets are back to center stage following Chicago.

*NASCAR Camping World Truck Series: Was Chicago Buescher’s Coup On the Way to Truck Title?* James Buescher’s victory in Saturday night’s American Ethanol 225 at Chicagoland Speedway marked his second win in the last three races and third on the year. But one thing the No. 31 Turner Motorsports team proved was that they are clearly a championship-caliber team. Despite starting 11th and running lap times comparable to the leaders, Buescher suffered power problems just before the halfway mark. During the third caution, the No. 31 crew worked hard to change the carburetor; however, Buescher lost two laps in the process. But the 22-year-old never gave up and earned two laps back, and, with the help of four fresh tires, rallied back to what will likely be looked at as his most important victory this year, especially if he manages to win the championship.

If James Buescher wins the 2012 CWTS title, he can look back at Chicago as a turning point.

Although Buescher did lose two laps while the team replaced his carburetor, crew chief Mike Shelton had expected to lose three. Despite the heat and small parts involved in the repair, their “never give up” attitude allowed the team to make a speedy repair and continue working toward the ultimate goal of victory lane. I’ve documented so many times before how well the 2011 season went for Buescher despite missing a race early in the year, and I wouldn’t be surprised if he heads to Homestead-Miami in November looking at a very realistic shot at taking home the big trophy.

For the full rundown on Saturday night’s Truck Series race, be sure to check out “Tracking the Trucks.”:https://frontstretch.com/blunkenheimer/40679/ _–Beth Lunkenheimer_

*ARCA: Poole, Kimmel Making Their Cases for Knocking Buescher off Point* Though Kevin Swindell’s win on Saturday, in which the driver lead all 100 laps from the pole en route to his first career ARCA trophy, will mean nothing with regard to the championship picture, the 150-mile event was a vital race for the Venturini Motorsports camp to get back on track. Faced with a hard-charging Alex Bowman and having lost the points lead to Chris Buescher last week at Iowa, Brennan Poole and the No. 25 team capitalized on a hometown race weekend for the operation, avoiding tire issues for the first time in a month en route to a runner-up finish. Coming on a weekend that saw Bowman, who leads the ARCA ranks in wins this season, struggle with a vibration all race long, Poole demonstrated composure and patience in racing from the back of the field (post-qualifying adjustments sent the No. 25 to the rear for the start), cutting into Buescher’s points lead in the process.

The other winner this weekend? None other than veteran Frank Kimmel, who in finishing third, scored his best finish on an intermediate oval since 2010, staying within 100 points of the series lead despite being the only driver in the top 5 without a race win this season. For Kimmel to be in striking distance heading into a summer stretch of dirt races and short tracks is a sure indicator that the young guns up front are not going to back into this one. Getting the intermediate program on track was a huge step forward for Kimmel and his new team at ThorSport._-Bryan Davis Keith_

*Short Tracks: At Halfway Point, Season Only Beginning to Heat Up* It is time to hit the home stretch at the local short track level. The 4th of July generally marks the midway point of the summer, but many tracks awarded midway point money and/or championships this weekend. The implications can have many different effects on drivers and tracks.

For national points races, the time to redouble efforts is at hand for the drivers and teams who are in contention. For teams who have come to the staunch realization that this isn’t their season, there are a couple of months to regroup and refocus. Preparing for the big money races at the end of the season, branching out to different race tracks to try and expand their skill sets or cutting back on racing to save equipment for next season are all tacks that some teams will take.

From the fans’ perspective, it means it is time to make that trip to a track that you’ve always wanted to go to. It is time to purchase tickets for one of the marquee events that will take place in September, October or November, or simply to pack up the family and head out to the regular weekly action. Most of all, summer at the short tracks means that fans just need to get out to their local short track and support the people who are the future of the sport or the people who are offering the future of the sport a place to compete. _-Mike Neff_