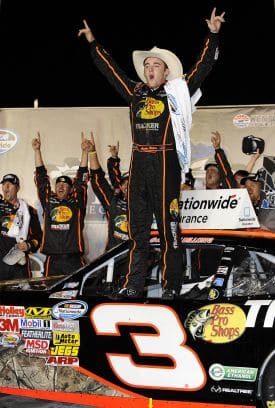 On Monday, Richard Childress mentioned in an interview that his grandson, defending Camping World Truck Series champion and current Nationwide Series title competitor Austin Dillon, would remain in the second-tier series in 2013, ending speculation that the young driver might challenge Ricky Stenhouse, Jr. for the Sprint Cup Series Rookie of the Year title.

Of course, it’s unsurprising that Childress would decide to go this way with Dillon. It’s easy to forget that Dillon first drove in NASCAR in 2008, when he ran two Nationwide races and scored a fourth-place finish. Many teams might have thrown such a young talent onto the fast track to success after such a start, but Childress was in no hurry, entering his grandson in six Nationwide and Truck races in 2009 before finally going full-time in a truck in 2010 and 2011.

Despite his early success, Austin Dillon will wait another year before heading to Sprint Cup full time-and Kevin Rutherford says that’s for the best.

The pacing slightly rivals that of Stenhouse, who began in ARCA and is now going on his third full Nationwide season, though his 2010 was plagued with issues and eventually saw him sitting out a few races to get his head straight.

At last, it seems like the young talent in NASCAR is getting moved up at a healthier rate. There’s no denying that Dillon and Stenhouse have the raw ability to at least make it to the Cup level, but just imagine throwing either of them into the top series in, say, 2010.

That might seem a bit far-fetched these days, but I think that’s only because teams are much more cautious with who they actually put in their rides. Money and sponsorship is most certainly a factor, with many sponsors seemingly more reluctant to take on unproven young drivers.

According to Childress, this has been the plan for the Dillon boys (including brother Ty, currently racing in the Truck Series) since they were much younger. And while it remains to be seen whether or not they end up stars in the sport, at least they’re following a better career trajectory than many before them.

I think one that comes to mind as a driver who unfortunately didn’t have someone like Childress guiding him on an eased path is Casey Atwood. Remember him? In the late ’90s, Atwood was a hot commodity any team would’ve died to have gotten their hands on. After a few respectable seasons in what was then the Busch Series, Atwood jumped to Cup driving for Ray Evernham. What followed was an up-and-down season that culminated with Atwood moving to the No. 7, where he struggled even more. Come 2003, he was no more than a journeyman driver, a far cry from the star many expected him to become.

Such a thing has even happened more recently. Matt DiBenedetto and Brad Coleman come to mind. Two former Joe Gibbs Racing development drivers, they were decidedly rushed into the Nationwide Series, where their results ranged from impressive to iffy. There was talent in both, sure, but neither really got much of a chance to develop, instead getting spot starts in the series before eventually finding work elsewhere. Now, Coleman’s out of NASCAR and DiBenedetto occasionally parks in the second-tier series for Key Motorsports along with Stephen Leicht, another promising young one who may be damaged goods.

Damaged goods. The two words that bring to mind a product sold in a grocery store, something that has some sort of defect that keeps it from being the most it can be. The same applies to racing, particularly with many younger drivers that may have once had bright, promising futures.

The fault here often rests on the owners who either progress their talent through the ranks too fast or never really give them a chance to develop — sometimes both. The same term has been applied most notably and more recently to Joey Logano, who has not yet become the star many–including Mark Martin–expected him to be. Did Logano suffer by jumping into Cup almost immediately?

We could talk about this all day — drivers who showed promise but ended up going nowhere. Sometimes the guy or gal with the helmet is to blame, but it’s tough to believe that every single racer in this situation came to be so from lack of actual talent.

It’s why I love Childress’s plan with the Dillons. As much as I’d kind of like to see another spirited rookie battle in Cup, Austin Dillon is still not ready for the ultimate level. He’s made great strides and is showing he belongs, but I don’t think anyone wants to see him become another Atwood or even another Logano. Ty seems to be progressing a bit faster, but I’m confident Childress will keep him, too, to a schedule that finally sees the younger Dillon in Cup in about 2016, assuming he continues to run well.

Avoiding the Dillons becoming damaged goods should be RCR’s top priority for the boys, and so far they’ve done just that. Plus, running Austin in a few Cup races here and there certainly isn’t out of the question, and should provide clues as to whether or not he is truly ready for the top level of the sport.

Let’s see Austin Dillon win a championship (or two!) in the Nationwide Series and pull off some strong part-time showings in Cup before he moves to the series for good. This way, we can almost ensure that we’ll finally have a competitive young gun at the top level of NASCAR.