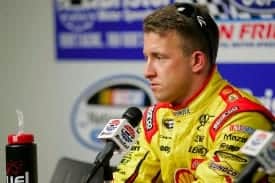 Aside from not having any…but of course, that is my opinion. I want to know what you think.

Counting the headline as number one, here’s a second question for you to mull over. Do you think AJ Allmendinger is a drug head? While you think those over, here are some quotes from some of the players involved and some who are not.

“I don’t see how any man, if he’s got any (manhood) at all, can go and take what he’s fixing to have to take — and that’s going through the Road to Recovery for a guy who did not take drugs or did not do what they’re saying he did,” Jeremy Mayfield said, when asked about Allmendinger’s situation. “It’d be tough because you’re basically living a lie to be a poster boy for NASCAR’s drug policy.”

OK, I know it is Jeremy Mayfield. One would expect a little bitterness, but even though Mayfield’s case didn’t turn out so well (he certainly didn’t help himself as the years wore on), he does bring up a good point about being a ‘poster boy’.

Jeff Meyer wonders if having to enter the “Road to Recovery” program makes a driver look more guilty of something than he may be.

Let’s assume for a minute, as we should, that AJ’s positive (which has been listed as ‘amphetamines’) is totally accidental and/or caused by something eaten or taken with no intent to get any sort of high. How damning is it that those in charge of NASCAR’s drug policy saw fit to actually NAME it, ‘Road to Recovery’?!

Is there no room or contingency in place for cases where a false positive, or a positive that is obviously unintentional, occurs? Why can’t another test be done? Why can’t NASCAR come out and say, “Hey, we want to work with you on this. We don’t think you’re a druggie, we want to run some more tests and/or at least get to the bottom of this!”

For whatever reason, they don’t do that. You are assumed to be a poor, unfortunate, misguided soul who does drugs and MUST go down the ‘Road to Recovery’!

Even the statement from Shell/Pennzoil, AJ’s sponsor shows no confidence in this whole ordeal.

“Shell and Pennzoil believe that the process and procedures that NASCAR has in place as part of their substance abuse policy are appropriate and serve to ensure that the sport and its participants are held to the highest standards. We share Penske Racing’s disappointment with the result of AJ’s (Allmendinger) B sample test and will work closely with them to determine plans moving forward. We hope for the best for AJ during this difficult time.”

Just so you know, while NASCAR tests listed ‘amphetamines’ as the cause of the positive, the same tests also ruled out Ecstasy, marijuana, alcohol and methamphetamines. Brand names of medications that contain or metabolize into amphetamines include Adderall, Dexedrine, Dextrostat, Desoxyn, Didrex, ProCentra and Vyvanse.

AJ is going to jump through NASCAR’s hoops and go into what they call ‘rehab’ and go down the ‘Road to Recovery’. You can also bet that in the coming weeks, the Allmendinger camp will find out exactly what caused this unintentional positive. I just hope and pray this all doesn’t turn out like the Mayfield fiasco, leaving myself and everyone else who defends AJ looking like fools.

Speaking of fools, Brian France uttered some more words recently on the subject of competition and how the decision process in the upper rooms of NASCAR really works. The following is a brief excerpt of an AP interview, conducted by Jenna Fryer with Brian.

As CEO, France said what he wants supersedes what any purists on his staff might prefer.

“I overrule them, quite frankly, because I have to,” France said. “We can’t have four strategies going on. There aren’t a whole lot of people who don’t want to see more lead changes, or a photo finish, or slamming and banging coming out of the fourth turn.

“We are unabashed about wanting that. We want to put it more in the driver’s hands. It’s a contact sport and if you have a chance to win and are in second place on the last lap, would I expect there to be some contact if you have a faster car? Absolutely. The guys who don’t do that, that’s not our rules. We want to see what everybody else wants to see – excitement.”

Now I understand that NASCAR’s drug policy and testing procedures are in place to ensure safety and well being of all involved, but shouldn’t that extend to the top as well? To the guy who is making all the decisions? I mean, isn’t it equally, nay doubly, important that he be drug free as well?

After my last week’s column, like soooo many I’ve published before with Brian France quotes, comment after comment comes in as to the certainty that Brian France is in fact on drugs. I even got a personal contact that said they had it from a very reliable source that Brian was a raging coke head.

Now, since I have not done any coke with Brian personally, I cannot sit here and say for sure that his is a coke head one way or another. Personally, I think that if he ISN’T a coke head, then he is one of the dumbest persons alive and so removed from the reality of the fans that it is almost unimaginable. I mean hey, c’mon, just like Mayfield, he certainly doesn’t help his own case when he speaks.

In light of all that, what better way to show us the ‘integrity’ in NASCAR at the highest level then by Brian France taking a drug test as well?! Sure, sure, it would mean nothing, we all know the result already (after all it is their lab), but still…it sure would be a nice gesture….even if a hollow one!

So what do you think? Who’s more apt in your opinion to be a druggie…AJ Allmendinger or Brian France? Is there integrity left in NASCAR or is it all just a show?

At least here at The Frontstretch we will publish all the comments…not just the ones I like!