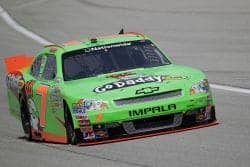 *What happens at Penske Racing from here on out?*

The suspension of AJ Allmendinger due to a failed drug test has been a gigantic distraction for the race team. You can argue with me all day, but you cannot convince me that _two_ negative tests and the waiting around in between the two hasn’t at least provided some uneasiness in the Penske camp.

Sam Hornish Jr. will compete in at least the next two races, though Penske has yet to announce what will happen after that. While Allmendinger has agreed to go through NASCAR’s Road to Recovery program, that process is at least five months in the making and Allmendinger’s contract with Penske was up at the end of the year.

I’ve expressed concern that this ongoing drama in the Penske camp might trickle down to likely Chase contender and fellow Penske driver Brad Keselowski. At least one reader, though, told me that I was reading too much into things.

Really? I don’t think so. If that were the case, then every driver, crew chief, owner, and literally anyone else in a multi-car team in NASCAR wouldn’t emphasize how important communication, teamwork, and camaraderie were in the workplace. I’m not saying Keselowski’s engine will fail every other race, but I have a hard time believing the productivity in the shop doesn’t falter when a huge obstacle like this takes place.

*Will the extra race at the Brickyard make a difference in grand scheme of things?*

I’m going to be up front: I hate the Brickyard 400. Sure the track itself has an amazing history behind it, but the racing itself is sub-par at best. If it were anywhere else _but_ Indianapolis, everyone would be screaming for it to be removed from the schedule.

As a matter of fact, I’ve seen much of that this past week. A huge part of it, I believe, was the removal of Lucas Oil Raceway, formerly Indianapolis Raceway Park, from the NASCAR Nationwide and Truck Series schedule. Now that the Nationwide Series has a date at the Brickyard too, the sting of losing a rare short track is starting to sink in.

The addition of the Nationwide Series seems to have been an attempt to add to the pageantry of the weekend, along with the Grand-Am race. A busy weekend like that works at a place like Daytona, a track that historically and consistently puts on fantastic racing. But Indianapolis? It might as well be another Midwestern mile-and-a-half cookie cutter.

The addition of the race does seem to have made a difference in terms of perception from the fans, but not in the way the track and NASCAR originally intended.

Will Danica Patrick have a better chance to win the Nationwide race this weekend with her prior experience at IMS?

*Is there a realistic chance Danica Patrick will actually win this weekend?*

Sure. If you believe in unicorns and the tooth fairy, I guess anything is possible!

Again, Indianapolis is not Daytona. It is not “anyone’s race” or a “crapshoot.” It is a track where track position and clean air are at a premium, and passing is kept to a minimum. Even with her experience there in IndyCar, it will seem like a whole new track in a stock car.

Don’t get me wrong. I think she has done a good job in the Nationwide Series for her limited experience in stock car racing. But that doesn’t mean she’s anywhere close to Victory Lane caliber, regardless of whether she’s been there before.

*Can Indianapolis produce a first-time winner?*

Back to the Cup Series, the Brickyard 400 isn’t known to be easy on rookies. Many Brickyard 400 winners either were or went on to be champions the year(s) they went to Victory Lane. You know the names Jeff Gordon, Jimmie Johnson, and Tony Stewart. All champions. All Indy winners.

Yet last year, a fuel mileage race put a name in Victory Lane that was only familiar to diehard NASCAR fans and consumers who shop at his father’s store: Paul Menard. Menard is the only driver who can say he won his first career race at Indianapolis, but could he have set a trend?

Without another fuel mileage race (which I’m in favor of, but that’s beside the point) we’ll see talent, not strategy, in Victory Lane. In fact, history shows that the driver in Victory Lane on Sunday could very well go on to win the 2012 Sprint Cup Series champion with eight winners of the race going on to win the championship later that season.

Though, you have to admit a fuel mileage race would really add that extra spice to a typically dull race.