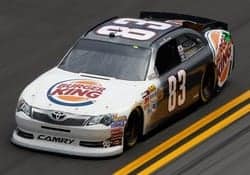 Executing all of our goals as a team, like pit stops or getting through practice without mistakes, or race strategy, or anything that I do in the racecar, it’s kind of just a matter of putting it all together all at once. We need to be able to do that. If we can do that every week, I think that’s where I can run top 25.

In response to the recent issues with lapped traffic, I don’t really think that comparing lapped traffic in Nationwide to lapped traffic in Cup to be apples to apples. I think there’s a vast difference of professional drivers that are in the Cup Series that could drive circles around those drivers in the Nationwide Series that are lapped cars. There’s definitely a huge difference between the guys that are running 30th in Cup and the guys that are running 30th in Nationwide. To me, you’re curious to see what someone like Harvick says about that.

Landon Cassill weighs in on lapped traffic, drug tests, supplements, and the fun he’s had doing Twitter trades in this edition of his driver diary.

I think it boils down to if you’re leading the race and a lapped car gets in your way and costs you the win, it’s gonna tick you off whether you’re in a Hobby Stock race, Nationwide race, or a Cup race. I definitely hold the drivers in the Cup level to a higher expectation, but I will say that the things that have happened in the Nationwide Series with the lapped cars in my opinion is embarrassing. There’s things that the lapped cars have done that don’t make a lot of sense. It almost looks like they don’t what they’re doing out there.

So, I can see the frustrations of the lead lap cars and I can definitely relate to that. But, I think lapped traffic is just part of racing and that’s part of what we deal with. But it does happen in the Cup Series. There are lapped cars that get in the way in the Cup Series. But I think it happens more often in the Nationwide Series and probably more often than it should.

In regards to AJ Allmendinger’s story, it’s just too bad. It’s a shame; it’s a shame for AJ, and for Penske, and for Shell. I feel bad for all groups, including AJ. None of us can rightfully say whether he has a drug problem, all we know is that he tested positive — it’s just too bad. Whether he has a personal issue, or whether he was just taking vitamins, it’s too bad that happened to him. And it’s too bad for Mr. Penske and for Shell – that’s my stance on that. It’s just a shame and not the publicity that the sport needs.

But I do think they’ll get to the bottom of it and figure out what happened, and it’d be nice to know what happened! I have taken supplements and I always run them through NASCAR. That’s a tricky process. Even if you tell NASCAR that you’re taking a supplement, you’re still taking it at your own risk. They won’t just say, “Oh yeah, we approve this supplement and that will waive you of any positive drug test.” I don’t think that’s how it works. The message that I’ve gotten is still that a specific supplement may not have anything unapproved in it, but you’re still taking it at your own risk.

I have refrained from taking any dietary supplements at all. I don’t take anything right now, and I haven’t for months for that reason, just because you don’t know. That industry is kind of wide open, and it’s a little unregulated. It’s hard to trust something that you don’t know for sure. Even if you buy at a place like GNC, you still don’t know what’s in it, so I’ve steered clear of taking any kind of supplement. I’m even careful with protein drinks and any type of energy drink or anything like that.

I don’t think you can totally blame NASCAR on it, though. I think us drivers are partially to blame because we don’t necessarily use the technology and the resources that other professional athletes use to research the stuff. For a lot of these guys, it’s just a matter of looking at a label, and I’m sure there are other guys who have gone more in-depth. I don’t think it’s fair to point all the blame at NASCAR or saying that they need to be more clear on it. They have a list of the banned substances: it’s in the rule book. If those substances are in your system and you produce a positive test, then you’re suspended. I think that is very clear.

Where it gets unclear is that it’s such an unregulated industry. If you say you want to take supplement XYZ, NASCAR puts themselves at risk by saying, “Yes, you’re allowed to take that product.” Now all of a sudden NASCAR is at the mercy of, “Is that product laced with something? Is there a batch of something in that product that isn’t on the label?” That’s what happens in that industry. That’s what could have happened to AJ; he could have taken a product that had something in it that wasn’t on the label. I think that’s the unknown part that’s scary and kind of keeps us away from the products we’re taking.

Now, if I was really hell-bent on taking supplements and I had to do it, I’m sure I could do the research, find a product that I was comfortable with, find a company, get to know the company, test their product, make sure I’m not going to fail a drug test, and then start taking that supplement. But to just pull one off the shelf at GNC, I think you’re putting yourself at risk by not knowing what’s in it.

On another note, I haven’t done the Twitter trade yet. I found some pretty cool stuff. I’m looking at a guy right now that has a pretty neat, old Bobby Allison lamp — it’s a lamp with a racecar on the bottom of it. It’s pretty sweet! I’m thinking that he might be the guy I trade with, unless somebody comes out with something better…

Some of the cool things people have offered to trade are an old hero card of my own, which was cool to see that they had! It was like a late model hero card, and I appreciate that from my fans and to see that they have some old school collectibles of my own. But that’s about as crazy as it got. I think we’ll do a couple trades before we get the hang of it and figure out what people like to trade.

My manager Joey came up with it. We were talking, and he noted everybody does these Twitter giveaways. I think they’re kind of a boring way just to get a bunch of retweets. So we’re like, “Let’s trade and see if we can get a bunch of people engaged in it!” And we did! We got a bunch of people who offered stuff up, so it’s pretty neat.

Looking ahead to Indianapolis, it’s very historic and I love that place. I love going to Indy, and I just can’t wait to get there! It means a lot to anyone who’s been around racing their entire lives like I have and just about everybody in our garage — it just means a lot to be able to go into that speedway and participate. As far as expectations, I think we need to go there and focus on nailing down another top 25, though we hope it’s a top 20. I qualified 20th there two years ago and I finished 20th there last year. I would like to go do something like that this week and go re-produce some of the good results that I’ve had in the past.