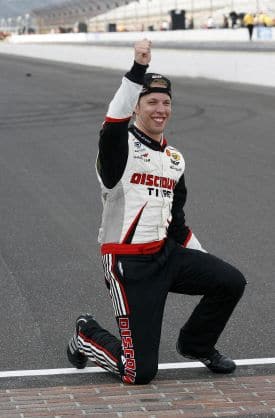 The Nationwide Series debuted at the Indianapolis Motor Speedway on Saturday as part of the track’s “Super Weekend.” The 100-lap race started out looking like it was going to be a Kyle Busch walkover, shifted into a Elliott Sadler points lead protector, then finished up with Roger Penske’s first ever stock car win at the fabled racetrack. Most importantly of all, there were actual people sitting there watching it all unfold. While the rumblings among some fans and most of the media was that the idea to move the Nationwide Series from Lucas Oil Raceway to the Speedway was a horrendous idea, attendees came out in some surprising numbers. While NASCAR’s overall estimate might be generous at 40,000 fans, it was, indeed a typical Nationwide crowd. Once the checkered flag flew, Brad Keselowski was in the Winner’s Circle celebrating the victory in the inaugural Nationwide race at the Brickyard.

Kyle Busch dominated the race early but lost track position on a late-race pit sequence that resulted in him restarting in ninth position and spinning off Turn Two on the ensuing restart; that essentially killed his hopes of winning the race. Elliott Sadler jumped the restart after that caution, black-flagged by NASCAR and given a pass through penalty which ended his dreams of winning the inaugural race. When it all shook out in the wash, it was Keselowski who led the final 29 laps and put a tally in the win column for Penske after so many years of frustration for his stock car operation.

As the points were tallied when the race was finished, Sadler went from an 11-point bulge over Austin Dillon to a mere one point edge. Ricky Stenhouse, Jr. gained six points as well which leaves him 13 points behind the leader.

While a Cup regular winning a Nationwide race is seldom a good thing, an exception can be made on this one occasion as Keselowski’s victory gives *Roger Penske* his first victory at Indianapolis Motor Speedway in a stock car. Penske has owned the track at 16th and Georgetown when it comes to open-wheel competition: he has 15 Indianapolis 500 wins. However, since 1994 Penske’s teams have competed on the famous 2.5-mile oval and never succeeded in bringing home the brass ring. Multiple efforts have come tantalizingly close, but none have come to fruition until Keselowski brought home the gold in the Indiana 250.

Not lost in the excitement of a Penske 1-2 finish was the success of *RCR* which, even with Sadler’s penalty and resultant 15th-place finish, had a stellar day. Austin Dillon started the race in seventh and spent the vast majority of the race in the top 10 before coming home in fifth; he received Rookie of the Race honors among those eligible for Sunoco Rookie of the Year. Overshadowing Austin’s performance was his younger brother Ty Dillon’s run. The sibling rolled off third and, aside from a temporary dip during green-flag stops that were interrupted by a caution flag, spent the day in the top 10 en route to a third-place finish. That result was the highest of his brief, two-race Nationwide career.

The Indianapolis fans also deserve a shout out with somewhere between 10 and 40 thousand people showing up to cheer on the inaugural show by the Nationwide Series at the Brickyard. Many people felt as though this race would be an unmitigated disaster from an attendance standpoint, but it ended up being a representative crowd for a Nationwide event.

Kurt Busch last raced in the Nationwide Series in Daytona in a Phoenix Racing No. 1 car. The result was a win and a feel good story in a season that has been marked by several roller coaster moments. Busch started off the race in the 18th position and started strong, moving up to the top 15 before his car received damage to the nose of his car. That resulted in some lengthy time in the pits, but Busch was able to hang tough, staying on the lead lap while receiving a hefty bear bond patch. After returning to the race and making some headway, Busch’s No. 1 ride succumbed to an electrical issue and dropped out 41 laps into the race.

Kasey Kahne had a strong day going before a late race pitstop resulted in his dropping from the top 10 to a 25th-place finish. Kyle Busch also went from being the dominant car of the race to a spin and an unscheduled pit stop which resulted in a 22nd place result.

Robert Richardson ran the entire race, but it was not without a tremendous amount of difficulty. Richardson started the race in 42nd and worked his way as high as 24th before having to pit a myriad of times. While running at the end of the race, Richardson was 21 laps down and was the last car running at the end of the event. While it is great to see Richardson and his R3 team put in the effort to run the distance, it is a shame to see him have so many struggles just to make it to the finish line.

*Underdog Performers of the Race:*

While an award should usually go to one deserving recipient, there were two underdogs who both shown brightly in this race. Jeremy Clements started the day in 16th position and marched forward for nearly the entire race, coming home in 10th. Right behind Clements was Mike Bliss. While Bliss is getting a little bit long in the tooth, he still has the desire to wheel a race car and, when given the chance, can get the job done. Bliss began the race in the 12th starting spot and soldiered home to an 11th-place run after dabbling inside the top 10 during the race.

Start-and-parkers occupied 8 of the 43 starting positions in Saturday’s race. They garnered $146,341 in purse monies.

227 of 817 starting positions have been occupied by start-and-parkers and Cup regulars (27.8%)

Brad Keselowski took the high road about Elliott Sadler’s penalty for jumping the restart in post-race interviews. Upon further review, he tweeted that he felt ESPN did a disservice to the situation and caused most of the uproar.

Justin Allgaier commented to Frontstretch during the Nationwide driver autograph session that IMS is the most line-sensitive race track he’d ever run on. He noted that missing your marks by even a foot could kill an entire lap.