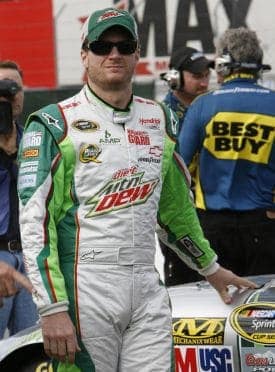 After the dust settled at Indianapolis, Dale Earnhardt, Jr. emerged with the point lead for the first time since 2004. That’s right; the driver once labeled “fourth-best” at Hendrick used a fourth-place finish to climb to the top of NASCAR’s championship Chase for the first time since Joey Logano was practically in diapers. Although NASCAR’s Most Popular Driver won’t be the point leader when the postseason starts, unless he goes on a phenomenal winning streak, there is no doubt that he is a legitimate threat to win the championship in 2012. While the wins have not come in large numbers, the speed and consistency are there to position Earnhardt near the top of any pre-Chase favorite lists. With the current state of the sport somewhere between its niche status of the 1980s and its boom years in the 2000s, nothing could give it a bigger shot in the arm than having the No. 88 team in the mix for the championship once the green flag flies in Homestead.

Dale Earnhardt, Jr. is having an impressive season this year. But can NASCAR’s Most Popular Driver finally break through and win the sport’s most prestigious championship?

When Earnhardt Jr. came into the sport, there was obviously buzz around the fact that the son of a legend was not only competing, he was winning. Back-to-back Busch Series titles were followed by an early victory in his rookie season of 2000, followed by the Winston success where his team made double digit pit stops and came back to take the All-Star million dollars home. Everything seemed to be setting up for the heir to take over the throne. Earnhardt Jr. posted multiple wins in each of his first four seasons and finished third in points in 2003. 2004 set up as the season that would entrench him forever as a champion in the Cup Series and a threat to win multiple titles throughout his career. Earnhardt posted four wins, positioning himself well leading up to the inaugural Chase and followed up with consecutive strong finishes at Loudon and Dover with his famous “it don’t mean shit” victory at Talladega. Although he only held the point until the penalty came down from NASCAR, all for that verbal slip in Victory Lane he was still in contention for the title. After a third-place finish at Charlotte, he was 24 points out of the top spot and looking like momentum was clearly on his side. A wreck at Martinsville dropped him to 125 points behind point leader Kurt Busch; but Atlanta was next on the schedule, a track which had treated Earnhardt well early and often during his short career. Fifty-one laps into the race, Busch’s engine expired and opened the door for Earnhardt to erase the deficit and put his hat squarely back in the ring for the title. Jeff Gordon, who came into the race 100 points ahead of Earnhardt in second place, had early mechanical issues as well and ultimately only completed 299 laps. Fourteen laps from the finish of the race, Earnhardt was on a charge to the front of the field and was laying waste to the competition when he came upon Carl Edwards, who was running in third place. Earnhardt tried to pull in front of Edwards before completely clearing him on the back straight and made contact, crashing out of the event. The accident turned a sure top-3 finish into a 33rd place disappointment, ultimately killing his title hopes in an instant. Even after winning the next week at Phoenix, he was still 47 points out of the lead and finished the season in fifth place after coming home 11th and 23rd at Darlington and Homestead.

The following year saw the infamous crew chief change, with Tony Eury, Sr. leaving the top of the pit box and being replaced with Pete Rondeau. Eleven races into the season, Rondeau was replaced by Steve Hmiel for 15 races before Tony Eury, Jr. assumed the crew chief role. The following season saw a fifth-place point finish, but the team was never really in contention. Since 2004, Earnhardt has only posted four victories and has seemed to be chasing the shadow of what once was.

This season has seen a rebirth of Earnhardt’s career with his pairing with Steve Letarte. Letarte’s optimistic attitude and ability to make adjustments that almost always seem to help Earnhardt’s race cars has made him into a competitor for top 5s on a weekly basis. Since the 200th win for Hendrick Motorsports, weight was lifted from the organization, and the 800-pound gorilla of Earnhardt’s winless streak has gone by the wayside. Lately, the cars coming out of the 48/88 shop at HMS have been some of the strongest in the sport. Earnhardt has nine top-5 finishes, 15 top 10s and only two finishes worse than 15th. That kind of consistency has proven to be a formula that will put a driver within reach of a title since the Chase began. The difference between being in contention and actually winning the title, of course comes down to learning the right moves to put the car in Victory Lane. Carl Edwards proved last season that consistent finishes without a tick in the win column can cause you to come up centimeters short. But with the equipment that is coming out of the 48/88 shop right now, the ability to win races is within Earnhardt’s grasp. It is just up to him to seize the opportunity and finally write his name in the record book as a Cup Series champion.

The biggest obstacle that stands in Earnhardt’s way, unfortunately, is the cars and the driver that come out of his own race shop. By Jimmie Johnson’s own admission, he feels more confident and competitive than he ever has in his Cup career. Sunday’s win at the Brickyard marks Johnson’s fourth at the famous race track. The previous three times that he went to Victory Lane at Indianapolis, he went on to claim the series title. The confidence that is being exuded by Johnson, along with his crew chief Chad Knaus is going to be a very formidable foe for Earnhardt to surpass if he’s going to grab the brass ring.

Fortunately for Earnhardt, he has proven to have the ability to win championships, scoring two Busch Series titles in 1998 and 1999. Earnhardt also has a crew chief that has sniffed the title before, leading Jeff Gordon to a second and a third-place point finish after working under Ray Evernham during Gordon’s earlier title runs. Earnhardt’s cars are coming out of the same shop as Johnson’s and, in the hierarchy at Hendrick Motorsports, they are prepared simultaneously by the same people. As a result, knowledge gained within the two teams is going to be applied to both cars. When asked in his post-race press conference at Indianapolis, Johnson admitted that, since Pocono, gains that have been made by Earnhardt’s team have helped the No. 48 team increase their competitiveness as well.

But the most telling fact of all that launches Earnhardt into next-level contention has been simply the demeanor that he’s displayed at the race track, especially in front of the media. Earnhardt admits that he is shy and has always been very measured in his responses to reporters. However, while still contemplating his responses before answering questions, his body language exudes a confidence that has not been present since 2004. Earnhardt’s shoulders are back, his chest is out, and his gaze is forward and determined. He is to the point when finishing in the top 5 is a disappointment rather than a confidence boost. He climbs behind the wheel of the car every week expecting to win. His crew, once one of the most consistent at gaining spots on pit road, has once again begun picking up positions for him when the cars come in for service. The entire bundle is coming together.

In sports, it is a common saying that to win a championship you must first lose one. As of now, Dale Earnhardt Jr. has lost 12 championships, including one that he gave away through his own mistakes. During the course of the last seven seasons, Earnhardt has been the Most Popular Driver more because of his name than his accomplishments. But in 2012, the accomplishments are on the verge of overtaking the name in the main reason for his popularity. With the pieces in place and a bit of good racing luck, the time just might finally be right for NASCAR’s Most Popular Driver to win its most popular championship.