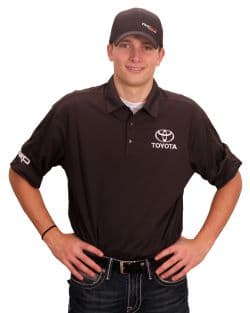 We went to Chicagoland and we were supposed to have a new truck, but we didn’t quite get it done. We took the truck we’ve been running a lot; we got there and ended up running 16th in both practice sessions. We just stayed in the same area all weekend. I thought we’d be a little better than where we finished, but we just had a little trouble on the restarts getting going. It would take the truck a lap to come back. It was one of the hardest places I’ve ever raced. To finish 16th I was three and four wide on every restart trying to get positions. We just needed to be a little better there and I didn’t quite get it; but I think we’ll work on it. Our teammate Matt Crafton was really good but Johnny Sauter in the No. 13 wasn’t very good. We’re trying to work off of each other and some of us get it while some us don’t, but I think we’ll get it the next time.

I’m pretty excited about Pocono. Everyone’s been calling me telling me how nice the new truck looks. It’s great to have a new truck, but it’s kinda weird going to Pocono with something new because it’s so different and so unique. I’d really like to take a new truck to a track that’s a little more generic, like a mile-and-a-half to get a feel for it. Not that Pocono is going to be bad, but it’s so different and there are so many things you gotta get right with just three turns and a repave. It’s a track that has so many variables that will make it a little different than we’re used to. But we’re excited and we have a good game plan going in for sure.

Dakoda Armstrong has yet to turn a lap in a truck on the repaved track at Pocono.

I like to think having no experience in a truck on the old surface gives me a bit of an advantage since I don’t have prior expectations coming into the weekend. We talked about how we’re so close to going wide open through turn two, but with the repave, everyone should be close to doing it. I’ve had a lot of experience there; I’ve raced three times in ARCA. I’ve had pretty good races and I’ve had some just OK ones. This is a track where you have to get everything right with speed because it’s such a big track. You have to be able to handle well through as many corners as you can and have good speed to be able to run up front. Pocono is one of those places where you really race the track more than you race other drivers because you get so spread out and it takes a while to run somebody down.

Using my ARCA experience I can give you a lap around the track. You come off of the straightaway–this is one of the longest straightaways I’ve ever been on–and it seems like it takes forever to get down it. You run such a big gear that it takes a while to build up speed. Right before you get to turn one, they have these signs like you’d see at a road course counting down–three, two, one–but you’re going so fast they come up quick. Pocono is one of the only tracks where I pick out a point to lift off of the throttle; most of the time I have a feel for it. I always pick out a point between those signs. You go down in the corner, you roll out and you try to use a little brake as possible. That first corner carries so much speed–it’s the sharpest corner of the track–and you have to use a little brake to make it through. Then, it’s just a matter of getting back on the throttle as quick as you can.

On the backstretch, you go down and have the same kind of signs when you’re coming up on turn two, the trickiest part of the track. But it’s also a place where you can make up ground on people because people mess up and have to get off of the throttle a lot. It is a corner but it almost doesn’t feel like a corner because it’s so quick. In ARCA, I’d lift and use just enough brake to settle the nose down–ARCA cars carry a lot more speed than the trucks will likely get there. You come off of the tunnel turn and stay high because you can carry a lot of speed there by not using a lot of brake. The key is coming out of turn three and accelerating quickly so you can carry that speed onto the front straightaway once again and try to make a pass getting into turn one.

Moving on to some fun off track stuff, my birthday was a couple weeks ago. I didn’t do a whole lot but I had to go back to Indiana to get my new license. I’ve still got everything registered there, so I was able to see some family and hang out there for a bit.

Dakoda Armstrong spent his off weekend having a little fun behind the wheel of a USAC car at Lucas Oil Raceway.

Last week when the Cup and Nationwide Series were racing at Indianapolis Motor Speedway, I was able to run the USAC race at Lucas Oil Raceway. It had been a while since I got behind the wheel of the car, and I know our finish doesn’t show it but it really wasn’t as difficult to get back in as I though it would be–it was kind of like riding a bike. My brother and cousin have been running it all year and all three of us ran identical times in qualifying. Around lap one or lap two, there was a little scuffle up front and guys started wrecking. I slowed down and the guy behind me was trying to slow down, clipped my right rear pretty hard and he went airborne and up into the catchfence. I’m glad he was alright. It took about an hour to clean up so I know that car was pretty messed up. When he hit us, he bent my drive line so the thing wouldn’t handle right the rest of the race. It kind of put a damper on our finish there, but it was still fun to go back and get a chance to do it.

Earlier this week, I had the chance to go to the NASCAR Hall of Fame. I’ve been there before but it’s always good to go and see all the fans that come out. We did it a little different where we had a question / answer segment on the stage. We always get to do the simulator and race against fans–that was fun. They have a pit stop setup there where Timothy Peters, Cale Gale and I were trying to do a “three man pit stop”:pic.twitter.com/KqfPbJvI as fast as we could. We got it down to nine seconds on one tire and six seconds of fuel. Our time was alright but I think the record was a 6.6 second stop, so we were still off a bit.

As far as the Olympics go, I’ve been watching a little bit when I’ve got the time over the last couple days. I usually watch whatever is on at the time since I don’t get to watch a lot of it normally. I try to stay on top of the men’s basketball. It’s kind of cool to see the guys you watch every week in the NBA go out and beat everybody. Water polo is something I’ve never really seen before, so it was pretty cool to watch. Those guys are pretty crazy to be able to swim like that the whole time.

_Hey readers! Do you have a question you’d like Dakoda Armstrong to answer? “Click here”:https://frontstretch.com/contact/14353/ to send Beth your questions and look for them in the next edition of the driver diary that will run on Friday, September 7th._