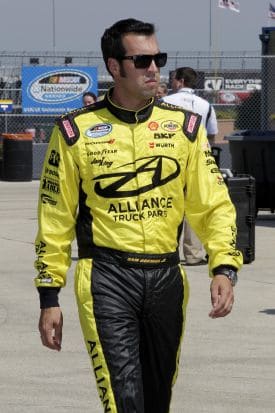 I would talk about AJ Allmendinger, but that horse has already been beat to death. Sure it’s possible we’ll see him in NASCAR again, but it’s not likely. Even if he does find a ride after he’s finished with the Road to Recovery program, it likely won’t be with a ride anywhere near the caliber of Penske Racing. Open wheel rumors abound, and that looks to be his best option.

Sam Hornish, Jr. has been given a second chance to make it in the Sprint Cup Series.

One man’s loss is another man’s gain, though, and in this case the gainer is Hornish. Essentially, what Hornish is getting here is a second chance in the Sprint Cup Series, something that pretty much nobody ever gets. If you lose a top Cup Series ride, chances are you end up in either lesser equipment or a lesser series. Rarely are there exceptions.

Yet with the suspension and eventual release from NASCAR and Penske Racing, respectively, Hornish was called upon to take over the wheel of the No. 22 car. Unsurprisingly, Hornish’s results have been unremarkable. In other words … he’s sucked. But maybe you can chalk that up to trying to balance two separate series while maintaining a level head as an entire race team fell apart around him.

If Hornish can somehow make the most of this opportunity, he may be able to land himself another full-time Cup Series ride. I doubt that it will work that way, but stranger things have happened–like Allmendinger failing a drug test.

*Can Pocono become a race fans look forward to from year to year?*

Change isn’t always a bad thing and when it comes to Pocono, it turned out to be a blessing. Shortening both races to 400 miles and adding a new surface were two changes the track recently made and the race there a few short weeks ago was one of the track’s best.

In my opinion, 400 miles should be the standard for most if not all the racetracks. That “500” mark should be saved for special events such as the Daytona 500 or Southern 500. Otherwise, the races need to be 400 miles or less, especially at a gigantic racetrack like Pocono, where 500 miles felt like an eternity.

I’m a believer in second chances, and I think fans need to give Pocono a clean slate and go from there. As fun as it was to call it the “24 Hours of Pocono”, the track intentionally spent a metric crap-ton of money and made specific changes to make it a better show for the fans. I think they at least deserve another look.

*Is talk of Dale Earnhardt, Jr. winning the championship premature?*

I’m pretty sure anyone who isn’t a Jr. fan will say absolutely YES! And I agree. This sort of nonsense was being said after his win in Michigan. Now that he has the points lead, though, it’s “OMG Dale. Jr. is going to win the championship OMG NASCAR IS SAVED!!!!!!”

While other media members and fans may be puckering up to kiss Earnhardt’s hide, I’m not going to be one of them.

Does anyone remember who was leading the standings after Indianapolis last year? No? But why? Because it didn’t matter then, and it doesn’t matter now.

By the way, it was Carl Edwards and yes I know he tied for the championship. OK, that’s great, but Kevin Harvick was leading after Indy in 2010. He finished third in the standings. Tony Stewart was leading in 2009. He was sixth.

While I won’t deny the trend that the points leader after Indy tends to do pretty well in the final top 10, remember that we have this thingy called “the Chase” and, whether you like it or not, is going to change the current complexion of the standings in the blink of an eye come Richmond. Heck, who is to say that Earnhardt will even keep the lead that long anyway?

It’s just too early to even peg Earnhardt as a title favorite right now. There are too many unknowns at this point, and way too many races to run. Let’s see him get a couple more wins before we pretend he’s the driver to beat.

*What about Jimmie Johnson? Is he the title favorite?*

Past history suggests yes, but past history also shows not near as many different players in the series week to week and year to year. There is a reason last year’s championship battle was so memorable, and it wasn’t just because the championship literally came down to the last lap. Honestly, it was memorable because none of us saw it coming. We figured the championship would be close, but a battle for the win in the final race of the season that would determine the championship? That stuff only happens in movies!

Also, Johnson didn’t have much of a say in last year’s championship. You can make the argument that he just didn’t have the same spark last season as he had the previous five years. However, there was a point in all of those championship winning seasons where people said the same thing and he was able to come through in the end.

When asked what changed, you don’t hear Johnson or Chad Knaus saying that they just started sucking wind for no reason. The competition just caught up and in a big way. Just look at the current shape of things. Earnhardt and Kenseth have the consistency, but not near the wins they should. Tony Stewart, Johnson, and Brad Keselowski have the wins but not the consistency. If they did, they’d be higher in the standings.

In other words, there isn’t a favorite. It’s just that tight right now. Johnson’s dominant win at Indianapolis was impressive. So was Keselowski’s resilient win at Kentucky. So was Stewart’s nail biting win in Daytona. Heck, Denny Hamlin and Kyle Busch have had some dominant runs of their own lately.

It’s not just Johnson the competition has to worry about anymore. It’s everyone. To peg him as the favorite right now is just as misguided as saying the same thing about Earnhardt. The race is on.