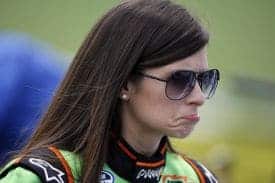 Last Sunday’s running of the 19th Annual Crown Royal Presents the Curtiss Shaver 400 at the Brickyard (whew!) was supposed to be one of the 2012 Cup schedule’s major events. Not only was the race touted for its combining of a historic past (it’s Indy!) with present-day excitement (it’s Hendrick Motorsports!), but the weekend also resonated with controversy (what was in AJ’s “B” sample? The same thing as in his “A” sample, apparently). The anticipation leading up to last week’s event at IMS promised fans all the thrills for which NASCAR has become famous.

What this meant was that it was the perfect time to grab some snacks, some cold drinks, plop in front of the television, and watch the Olympics.

This is more of the same ol’, same ol’ NASCAR Nation has been grousing about for years: so much goes to so few in such mind-numbing fashion. You say you want a Sprint Cup driving champion? How about the same guy for five of the last six years (and the same guy who looks poised to win it yet again)? When races look more like parades, and when drivers run to protect their points, fans tend to get upset. NASCAR fans expect (and deserve) more, even though the sport, more often than not lately, fails to deliver the goods.

Need proof? Here’s some data straight from headquarters: Sunday’s race at IMS had a margin of victory of 4.75 seconds before a crowd (generously estimated mind you) of 125,000. The race was 160 laps in length, an event totaling 400 miles. Of those 160 laps, winner Jimmie Johnson led 99. When using miles, Johnson’s win sounds even more dominating – the Lowe’s No. 48 Chevy led 247.5 out of a possible 400. Sunday’s event ran just a tick over two hours and fifty-four minutes; fans probably spent more time sitting in traffic getting to and/or from the track. Unless you’re a Jimmie Johnson fan, Sunday at IMS failed to deliver much bang for your buck….

But hasn’t this been the name-of-the-game thus far in 2012? Last year was wholly, totally, and thankfully different.

We cheered the Cinderella-start to the Sprint Cup season when Trevor Bayne won the Daytona 500 in storybook fashion. We celebrated a record five first-time Cup winners. We growled when Kyle Busch and Kevin Harvick played post-race bump-and-run on pit road at Darlington. We growled even louder when the advent of electronic fuel injection made fuel mileage a weekly concern. We screamed when Kurt Busch cussed-out ESPN’s Jerry Punch at Atlanta, and cheered when Busch was fired from Penske Racing shortly thereafter.

We watched in awe as Brad Keselowski won at Pocono a week after he suffered injuries in a wreck during testing at Road Atlanta. We also sat on the collective edges of our collective seats during the 2011 Chase for the Championship as Tony Stewart and Carl Edwards raced each other to a tie in final points. Stewart’s five wins during the last ten races trumped Edwards’ one win earlier in the year and gave Tony his third Cup title. It seemed as though there was no end to the stories and thrills. Just when one newsworthy event ended, another even more relevant story jumped in to take its place.

The 2011 NASCAR season made it fun to be a writer following the sport.

For NASCAR writers in 2012, it’s not so much fun as frustration. The lackluster arrival of St. Danica has morphed into questions about Cup sponsorship for next year. This issue comes right on the heels of Ryan Newman losing his deal with the U.S. Army. Is that a dark cloud approaching Stewart-Haas Racing? It’s no darker than the other clouds drifting over the sport.

Our Mark Howell’s indifference to this “raven-haired goddess'” performance thus far in select Sprint Cup races have left her crestfallen and inconsolable. Will Danica be able to turn that frown upside down in 2013?

The 2012 Daytona 500 needed three days to go from damp to champ. Rain kept the event from running as scheduled on Sunday, and the infamous jet-dryer fire on Monday night turned the “Great American Race” into the “Great American News Clip” shown on the networks’ Tuesday morning information programs. NASCAR then tried to make lemonade out of Speedweeks by exploiting Brad Keselowski’s Tweetfest from the backstretch. By the time the Cup Series rolled into Pocono for a full five (yikes!) days of fun in June, NASCAR was poised to unleash its hip new social media initiative on fans.

There’s been more unleashing, once again, this year at Penske Racing. Instead of celebrating the team’s emergence from the 2011 antics of Kurt Busch, we now sit and watch as Dingergate unfurls before our eyes. Was AJ all hopped-up on amphetamines? Personally, I can’t say for sure. I CAN say for sure that I’m a bit uncomfortable with my Frontstretch moniker right now (and no, that’s NOT how I manage to do my job each week….) While AJ walks his “road to recovery” (and did Brian France come up with that?), Sam Hornish, Jr. appears to be getting his second chance at a NASCAR career.

AJ Allmendinger’s “last best shot” turned out to be a squib, after testing positive for amphetamines. He was released from Penske Racing on Wednesday, ending his career with the captain after just 17 races.

Maybe something positive (other than AJ’s tests) will rise from the ashes at Penske after all.

Speaking of the trials and tribulations at Penske Racing, it’s good – albeit no longer newsworthy – to see that Kurt Busch is even newer-and-more improved after his suspension earlier this year. Without tantrums or profanities, Kurt will have to rely on his competitive performance to snag headlines in 2012. Not to wish that Busch (or his brother) will experience future meltdowns, but it’s easy to generate story material when a driver is acting like a human being.

When a driver is acting like a driver, we get little more than a message from his or her sponsors. This is an on-going gripe fans (and journalists) have with the cult of NASCAR. Not that we want drivers going all Mayfield on us, but it’s nice to see an athlete act like an athlete every once in a while.

Dear NASCAR: If you want to instruct drivers as to how to more closely resemble professional athletes, may I suggest you have them follow the Detroit Lions for a week or so. If there’s no such thing as bad publicity, then the Lions have swapped their weekly media updates for police blotter reports.

At least the NASCAR media pool will have something interesting about which to write. Recent missives concerning our sport have announced NASCAR’s “green” gift (with the co-operation of Watkins Glen International) of trees to the city of Elmira, New York. The trees are intended to replace several lost when a tornado passed through the area, even though it appears as though NASCAR will “double-dip” its gift so as to cover its “Clean Air Planting Program” that plants ten trees whenever a green flag is thrown during a race.

Speaking of business news…. Despite the ho-hum nature of last Sunday’s Cup race at IMS, the event still managed to turn a sizeable profit – even though attendance was down by 13,000 this year. According to a report in the Indianapolis Business Journal, while television monies covered Indy’s sanctioning fee with NASCAR, the real cash came from ticket sales, concessions, souvenirs, and parking. So who says Sunday’s 400-miler was bad for racing? It just depends on how you report the story.

So how much has NASCAR circa 2012 given way to inertia? Allow me to share with you a brief Associated Press wire story published in our daily newspaper on Saturday, July 28th. The headline read “Woman who lived with corpse charged”, and the story was about Linda Chase, a 71-year old woman in Jackson, Michigan (a town near Michigan International Speedway, by the way) “who lived for months with the corpse of a companion”. The woman was being charged by police for “cashing his [the companion’s] pension and Social Security checks”. (TC Record-Eagle, p. 3A)

The companion/corpse was a 67-year old man who had apparently died of natural causes in December of 2010, although police did not discover the body until they searched the woman’s Jackson residence on July 6th of this year. While shocking and slightly gruesome, it was the following sentence in the wire story that caught my eye.

The sentence read: “Chase [the 71-year old woman] has said she didn’t want to part with the body and talked to it while watching NASCAR races on TV”.

Has NASCAR become _THAT_ dull? Can a person die in the company of a friend and the two continue watching (and talking!) about the races, business-as-usual? I’m writing this with my tongue jammed firmly inside my cheek, but wow! Was the deceased that much of a fan that Ms. Chase couldn’t bear the thought of stopping his fun? Was the stupefying routine of recent races so mind-numbing that everything – including the corpse’s demeanor while watching events – seemed to be normal?

What does this discovery by police say about the nature of NASCAR’s television coverage? Sunday’s ratings for the Crown Royal/Brickyard 400 were, indeed, down from 2011. Should local law enforcement be out doing door-to-door searches on Sunday afternoons? Is this an analogy for the state of NASCAR in 2012?

Okay, so the guy may have died prior to the start of last year’s historic season; I guess an autopsy will determine that for certain. If Ms. Chase is correct, it just may have been a dull 2012 NASCAR season that stopped her companion right in his Barcalounger. While a tragic tale (Ms. Chase has been charged with forgery, having cashed checks to the deceased worth $28,000 in benefits), one can’t help but take notice of the NASCAR connection.

One thing’s for certain – we can’t blame the demise of Ms. Chase’s companion on last Sunday’s running of the 19th Annual Crown Royal Presents the Curtiss Shaver 400 at the Brickyard. He’d been dead a few weeks by the time the checkered flag flew over Jimmie Johnson at Indianapolis.

Maybe it was the excitement of Junior’s win at Michigan in June that finished him off? Despite living near the track – and given attendance numbers for NASCAR in 2012 – they wouldn’t have been the only folks to stay home and watch TV that weekend….