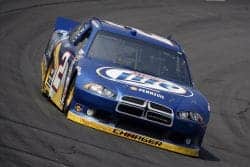 There’s nothing surprising behind the announcement that Dodge won’t be taking part in the first test for the Cup Series’ 2013 race cars at Martinsville next week. Penske Racing’s on the way out of the Dodge camp after this season, a swirling rumor about the Andrettis coming from IndyCar to NASCAR proved fruitless, and there’s hardly a rosy relationship between the manufacturer and journeyman Robby Gordon. The same Robby Gordon that made the Daytona 500 as an underdog Dodge entry, and got no subsequent engine help despite making all but a plea for a Penske motor in his post-Duel press conference.

Fact of the matter is, there’s no sign whatsoever that Dodge has made any progress on finding a new flagship Cup team since Penske announced their defection back to Ford. The chances of Dodge being unrepresented in the 2013 Daytona 500 are not miniscule.

With Penske Racing’s departure from Dodge, the manufacturer finds itself without a team at this point.

Here’s the real question…does it really matter for Dodge that their representation in NASCAR now sits in jeopardy?

One can speak all they want about the pride that comes with taking part in the pinnacle of American motorsports, the technical benefits of putting stock car technology through the grueling paces of racing, and the exposure that comes with entries on-track in NASCAR competition. The fact remains that for the Big Three and newcomer Toyota, the entire point of racing is brand awareness and marketing. Win on Sunday, sell on Monday.

The resurgent Chrysler Group, regardless of how that resurgence came about, is proving firsthand that a lack of NASCAR presence, success, dominance, has no bearing whatsoever on selling cars. Just today, sales numbers for the month of July saw the Chrysler Group post their 28th consecutive month of increased sales, up 13% for the month even as competitors GM and Ford both saw sales declines. Behind a lineup including the return of the Dart, Charger and Challenger, the Dodge brand is alive and well, even as its stature on the Cup circuit is on life support.

Here’s another fact that’s not surprising…there’s no apparent correlation between selling street cars…and the performance of race cars that, sans stickers, don’t resemble the street cars for sale. It just goes to show how diminished a role the cars themselves seem to have taken in NASCAR racing. As good as they look (the two models in the field anyway), the muscle cars surfacing in the Nationwide Series haven’t improved the crowds, or the TV ratings, or even managed to bring in the new ownership blood the sanctioning body insisted that series’ COT cars would. Decals it seems only go so far.

Racing is no longer the cultural pillar that it used to be. NASCAR’s infatuation with the casual fan, the diminished quality of their on-track product, and their corporatization of the sport has significantly eroded NASCAR racing and its pull over its fanbase.

Of course, even in the face of the sport’s decline, the situation probably would have been helped had Dodge’s racing program had a consistent face to build around. Ryan Newman seemed to be that guy after winning eight races, 11 poles and the 2003 Driver of the Year crown, but fell victim to Penske’s multiple seasons of struggles with aero push after that tremendous campaign. Dodge couldn’t keep Kasey Kahne corralled after managing to swipe him from Ford early in his career. And since Newman’s departure from Penske Racing, the face of that Dodge flagship was Kurt Busch, a fan pariah and Ford cast-off. Now Brad Keselowski’s career is taking off after Penske Racing scored the unlikeliest of coups from the Hendrick juggernaut…and Dodge lost that relationship too.

There’s something to be said for the management, the team relations, the technical capability that would lead driver after driver to head for greener pastures. Given the current state of the economy, the fact that factory backing is in play for 2013 and has no serious takers apparent over halfway into the season says a lot about the perception of Dodge’s current motorsports apparatus.

Having said that, just as the significance of Dodge’s participation in Cup racing has declined (the company’s doing just fine even with their racing program fraying), so has the significance of testing. So what if Dodge skips out on a tire test at Martinsville? With as much work as gets done on these cars away from the track in the wind tunnel and on seven-post rigs, a test at Martinsville isn’t going to glean too much that wouldn’t be found elsewhere. Besides, short tracks are only a sliver of the schedule and the “Little Rock” is right up the road from Charlotte.

And if Toyota taught race fans anything, its that it doesn’t take long to get to up to speed in this day and age. Sure, the 2007 campaign was a pure disaster for the manufacturer in their NASCAR debut, but all it took was the signing of Joe Gibbs Racing and they were winning races with the big boys.

Dodge can afford to bide its time and wait for that big-time team they’re looking for to become available. With as close as the manufacturers are this day, they’re shopping for teams just as much as the teams are for a car to race.

Because even if they’re absent for a while, their street car sales are up…and NASCAR’s significance continues to decline. Not seeing a Dodge at Martinsville may be worthy of note for NASCAR…nowhere near as much so for the automaker themselves.