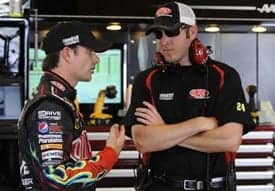 _Jeff Gordon is the best road racer in the history of Cup racing based on the number of road races he’s won. Unfortunately it has been several years since Gordon has returned to Victory Lane at a twisty course. The man charged with making Gordon’s car get around Watkins Glen is Alan Gustafson, who spent a little time with Frontstretch to talk about getting the car set up for the Glen._

_Gustafson covers how much aerodynamics play into the Glen, pitting the car heading in the opposite direction as normal and how rigid the car can be on the road course in New York._

Alan Gustafson looks to put the No. 24 back in Victory Lane at the Glen next Sunday.

Mike Neff: *What challenges do you face heading to Watkins Glen after all of the heat we’ve been dealing with this year?*

Alan Gustafson: The track is in good shape. It is a really, really fast road course. The average speed of that place is really phenomenal for a road course. High speed with big brake zones; the brake zones into turn one and the inner loop are really big places to gain lap time and passing zones. The car has to be good there. There is some combination of slow speed stuff–the carousel, you have to get through there well–but most of it is higher speed corners. I like the track. It is really fun to race there. Track position as always and pit strategy will play into it but if you have a good car you can pass, which is good.

Mike Neff:*Watkins Glen is a lot less technical than Sonoma. Does that allow you to be more aggressive with your geometry and the overall configuration of the car?*

Alan Gustafson: The biggest differences between Sonoma and Watkins Glen is you don’t really fight for drive off of the corners at the Glen as you do at Sonoma. Watkins Glen is a little bit more of a platform race where aerodynamics is a little bit bigger of a factor, the car having a really solid aerodynamic platform, where Sonoma is a little more mechanical. Really they’ve gotten closer and closer through the years. We run the same tire at both places now which makes tuning the cars much more similar. It helps with the correlations between the two. I was really happy with the pace of our car at Sonoma. We had a really, really fast car. Our rear tires fell off a little too quick and I think we adjusted to it, but I think that is good for us going to Watkins Glen because that speed will be a big deal.

Mike Neff: *Watkins Glen seems to be a flatter track than Sonoma, or at least there seems to be less elevation changes than at Sonoma. Does that play into the car setup at all?*

Alan Gustafson: There are some elevation changes at Watkins Glen. I think the biggest one that gets you at Sonoma is cresting three, which really unloads the car. Besides that [spot], I don’t think elevation change is really a significant contributor to either place. Driving up the Esses is a pretty big elevation change at Watkins Glen. I think that is what makes Sonoma so unique is where you’re trying to get the power down as you crest that hill and the car gets light. Besides that corner, I don’t think the elevation makes a ton of difference.

Mike Neff: *On the pit crew side of things, Watkins Glen is the only track where they pit the car with the fuel nozzle on the other side of the car and consequently change the tires on opposite sides first. How much time does your pit crew take getting ready for that?*

Alan Gustafson: It is odd and it definitely takes some time adjusting and it adds a little extra difficulty. The plan would be to have a couple of stops. You don’t really have any time during the race, if you have a bad stop at the start, to make up for it. We’re working hard on that. Our guys are going to do the Nationwide race with Fellows there so that will give them a day to get ready, because I think that is one of the tracks where that is a really big advantage.

Mike Neff: *How aggressively do you bump stop the cars or do they have to travel more because they’re on a road course?*

Alan Gustafson: I think the biggest thing is, as I said, Watkins Glen is a little more of a platform track, but you struggle with wanting the car to be down for aerodynamic reasons and you want the car to be as secure as possible. However, they have to go through the bus stop up there and they bounce the cars off of the curbs really aggressively and if your car is really stiff it upsets the car too much and you lose too much time through there. That’s both sides of the spectrum, into One and up through the Esses you want the platform of the car to be really low and stable, but when you get to the Bus Stop you want it to be compliant to where you can go over the curb so you have to balance them out and get it as right as possible.