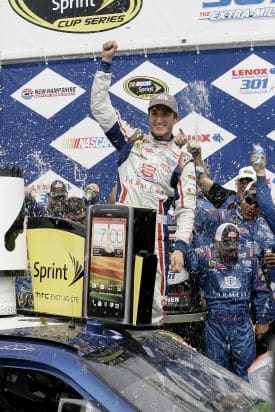 _With Indianapolis and Pocono behind us, the 2012 Race to the Chase is now at full bore. Championship contenders are emerging at the front of the standings, but perhaps more importantly, the Wild Card picture is beginning to develop some clarity. Here’s my assessment of each of the Wild Card contenders along with their chances of making the Chase._

Can Kasey Kahne make it into the Chase? Odds are pretty damn good.

*1. Kasey Kahne:* Had it not been for a slow start to the season, Kahne would be much higher in the standings, but that is all irrelevant now. The fact is, next to teammate Jimmie Johnson, Kahne is currently the hottest driver in the sport. Sitting 11th place in the standings with two wins and Hendrick power, Kahne is all but a lock for the Chase, and he could very well sneak into the top 10 if he keeps up his recent momentum.

*2. Jeff Gordon:* Oh what a difference a week makes. Just last week, the media and fans alike were ready to hang Gordon’s Chase chances by the neck. Surely if Gordon couldn’t win at Indy, he couldn’t win anywhere. Right?

Enter Pocono, where all the luck that had eluded Gordon and the No. 24 team all year long fell upon them like a pile of bricks. Gordon now sits a surprising second in the Wild Card standings and suddenly seems like a rather obvious pick to solidify a spot in NASCAR’s playoffs. There is one caveat, however. Gordon has been wildly inconsistent over the past few years at all of the remaining tracks that make up the Race to the Chase. Watkins Glen is a perfect example of this. Gordon dominated the picturesque road circuit in the early portion of his career, but the track has been nothing but cruel to him as of late. If he can stay consistent and perform well at the tracks he’s dominated in the past (Atlanta, Richmond, and Bristol come to mind,) Gordon should waltz into the Chase with ease.

*3. Ryan Newman:* Newman is a tough one to figure out. Just when it seems like everyone has written him off and relegated him to the status of “pretender,” he comes out of nowhere and delivers a top 5 or even a surprise win (Martinsville anyone?). However, despite Newman’s propensity to come out of nowhere and throw himself back into the points conversation, he and his No. 39 team simply have not performed well enough to beat out the Hendrick juggernauts over the long term. And let’s be honest, the one win he had on the season (Martinsville) was about as flukey as it gets. Unless Newman can shock us once again and deliver a surprise win when we least expect it, don’t expect to see the No. 39 team in this year’s edition of the Chase.

*4. Kyle Busch:* Here you go folks. This guy has the best chance the rest of the Wild Card contenders to upset the applecart and steal a Chase spot from one of the two Hendrick drivers. Busch has had a feast or famine kind of season in 2012. He’s either a threat for the win or the first one out of the race. Consistency is an issue which has plagued Busch throughout his entire career, and his impetuousness has bit him again this season (multiple mechanical failures haven’t helped either.) He does have one win, and thus he would only need one more to slide back into the second wild card spot. The No.18 team has the driver and the equipment necessary to go on a winning streak and vault into the Chase, but unless Busch can find some semblance of consistency, the Chase will elude him for the first time since 2009.

*5. Joey Logano:* Despite what many would have you believe, Joey Logano is still very much in the thick of the hunt for the Wild Card. Mediocre performances have left Logano standing a paltry 17th in the standings, leaving many to wonder if Logano really has the chops to pull off the upset and vault into the Chase. However, much like his teammate Kyle Busch, Logano has a win to fall back on. With how far behind Logano is in the standings, he will have to find the magic again and pull off another win if he wants to put up a serious fight for the Wild Card. Logano and his No. 20 team have proven multiple times this season that they are capable of performing at a Chase caliber level. Now it is simply a matter of execution. Looking at the next few tracks, it is not totally out of the question to think that Logano could steal one at Michigan, Atlanta, or even Watkins Glen. He is certainly the biggest longshot to make the Chase among drivers with wins, but if he and his team step up their game, they could very well pull it off.

*6. Carl Edwards:* With no wins on the season and mediocre week to week performances, Carl Edwards is currently the least likely of all the legitimate Wild Card contenders to get a spot. Despite sitting 12th in the standings, the fact that Edwards still has not notched a win puts him at a giant disadvantage behind the 5 drivers near him who do. He and his No. 99 team have not shown that they have what it takes to go on a winning streak and bust into the Chase, it’s as simple as that. It is entirely possible that Edwards could get lucky and steal a win somewhere, but the simple fact is that Kahne, Gordon, Busch and others are far better positioned to make the Chase on the strength of their wins, and those drivers have roundly outperformed better to boot. The championship hangover has hit Edwards hard, and there doesn’t appear to be any signs of the No. 99 team turning things around any time soon.

_So, that’s my take folks. Kahne and Gordon are by far the two most likely Wild Card contenders to grab the final two Chase spots. Hendrick Motorsports is on fire right now and it just seems silly to bet against them. The other Wild Card contenders have quite a hill to climb if they want to make the Chase, but it is still early and anything can happen, so these next few weeks ought to prove very exciting as a result._