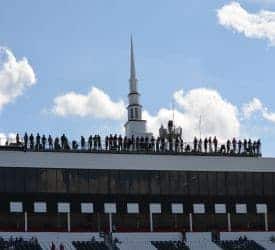 My telephone rang on Sunday afternoon. The caller? My 82-year-old father, who lives about forty miles northwest of Pocono Raceway. He mentioned that rain had been passing through the area all morning, causing the start of the Sprint Cup race to be delayed because of heavy downpours. I could hear audio of the Pennsylvania 400 in the background as my dad gave me a quick synopsis of the event thus far. At my house in northern Michigan, about 750 miles away, we were recovering from _Star Wars_ Night at the local ballpark and more focused on the busy week that lay ahead than events at The Tricky Triangle.

At one point in our conversation, I heard my father ask my stepmother, “What was that? Was that thunder?” She said that it was, and that there was a lot of lightning, too.

“It looks like a storm’s coming…” my dad explained.

Bad weather and Pocono Raceway are as synonymous as tar and feathers. Over the decades, I can recall many rainy weekends at the track, Mother Nature wreaking havoc aplenty compared to most other NASCAR facilities on the schedule. As a boy, I watched from the grandstands as the infield became a massive mud pond that entertained slime-slinging fans (and kids with binoculars along the frontstretch) until the state police showed up.

Sunny skies preceded what ultimately became a tragic and deadly afternoon at Pocono this past weekend.

In 2001, the ARCA race on Saturday afternoon ended in a late-race deluge. I was with Brett Bodine Racing that year, and Brett’s nephew – Josh Richeson – was battling Tim Steele for the win through an ever-intensifying downpour. Both Brett and his brother Todd were spotting for Josh that day; Todd’s advice was to “follow his [Steele’s] tire tracks” as the laps wound down. A television camera crew came to our drenched pit stall to capture what was shaping up to be a possible upset as Richeson took Todd’s advice; Josh tried to use the “wake” left by Steele’s tires to find much-needed grip as conditions worsened and the race ended under caution.

Richeson finished second in what was his finest (and wettest) ARCA performance.

In 2002, when I was again with Brett Bodine Racing, Thursday night rains turned into Friday morning gushers bubbling from the asphalt in Turn Three. Practice and qualifying were replaced by crews spending the entire day (and evening) repairing both drainage and the racing surface. Two Bodine brothers were again involved – this time it was Brett and Geoffrey (called in to practice/qualify Todd’s car because of a scheduling conflict) who were asked to inspect the repairs and approve of the result. Bulldozers saw lots of track time that day since the water damage, and the work required fixing the problem, were both extensive. This level of commitment is typical when changes and improvements are called for to make tracks safer.

Attending automobile races during the sport’s early days was almost as dangerous for spectators as it was for the competitors. The earliest racetracks for cars were often adapted (or simply “borrowed”) from racetracks used by horses. Retaining walls were little more than the skimpy rails that demarcated the line separating the audience from the action, and these did little to protect against a piece of debris – or even an entire car – from winding up amongst the crowd.

Granted, the cars themselves were not very safe, but at least drivers could wear goggles and maybe an old football helmet. Spectators themselves were often seated out in the open, placed in close proximity to the racing surface. As many have written since Sunday’s tragedy at Pocono, going to an automobile race has always been a risky proposition. Still, event promoters, sanctioning bodies, and race officials are typically able to control the cars, the track conditions, and the competition, accomplishing that with positive results over the past century. We’ve seen fewer injuries and deaths of both competitors and spectators alike.

In 2012, we’re a far cry from where racing used to be during its earlier (and more lenient) years. Most fans of a particular age are familiar with the catastrophic accident at Le Mans in 1955 when a Mercedes-Benz 300 SLR driven by Pierre Levegh hit another car, ripped into pieces against an embankment, and threw parts (including the engine and real axle assembly) into a crowd of spectators, killing 80 people.

The aftermath of this disaster brought about increased attention to safety barriers, fan access areas, track layouts, and other such measures that permeated throughout the motorsports world. Mercedes-Benz executives were so pained by the accident that the manufacturer left the sport for thirty years. No wreck since has accounted for so many spectator fatalities. Because of developments spurred by the 1955 tragedy at Le Mans, this record will likely (thank goodness) never be broken.

But racing’s infancy was even more reckless and dangerous for fans. Horse tracks didn’t adapt to the demands of auto racing very well, even when the cars were only running laps in the 50-60 MPH range. The dirt on these early “speedways” often dried out (as dirt tracks are wont to do), reducing visibility to almost non-existent levels. Poor visibility meant added danger for race drivers and race fans alike.

In 1904, automobile races were part of the World’s Fair in St. Louis. This was the heyday of Barney Oldfield – America’s first professional race car driver – and his Peerless “Green Dragon.” For his appearance before 25,000 spectators at the World’s Fair, Oldfield wore a pair of goggles and a green driving suit with matching “helmet” (more a cap with ear-flaps than anything else) to go with the forest green paint on his Peerless. Ever the showman, Oldfield made sure his mechanics had similar attire (perhaps a first for matching crew uniforms?) in a nod to the manufacturer for which he drove.

Barney Oldfield pictured with driver safety equipment from “back in the day:” a wool suit, goggles that blocked mostly wind and bugs, and a cigar. Leather helmet was optional.

Barney Oldfield’s Peerless was going to race against a Pope-Toledo driven by A.C. Webb. While Webb was a skillful driver, Oldfield and the “Green Dragon” were the favorites (Oldfield and the Peerless enjoyed, at one time in 1904, a record run of 18 consecutive victories). High winds that August afternoon churned the track up into thick clouds of heavy dust as the anticipation for the race built to a climax. As the green flew, neither driver could see the flagman clearly, which led to a false start. Despite their jumped start (how 2012 of those guys!), Oldfield and Webb ran wide open into Turn One.

Webb had the lead as the racers approached Turn Two, but that was when all hell broke loose.

A rock (supposedly about the size of a walnut) flew out of the dust from Webb’s tires. The rock hit Oldfield – who was running a wildly-close second on the Pope-Toledo’s tail – in the face. Oldfield’s goggles shattered and the blinding cloud of dirt and glass caused America’s Speed King to lose control of his car; as the Peerless left the track, it tore out seven fence posts and destroyed about 100 feet of rail. Barney was thrown from the car, his head seriously gashed by a big limb on a nearby oak tree. The Ohio driver also suffered a punctured lung, a crushed chest, a shattered ankle, and multiple broken ribs. Even worse than that, Oldfield’s accident injured twelve spectators and killed two. One of the dead worked for the St. Louis track; the other was a stablehand.

Accidents like Oldfield’s in 1904 were – oddly enough – not unique. During those early years, watching an automobile race carried the very real potential to be injured or even killed. Race cars were still a novelty to most folks, and getting close to the action was part of the thrill of a day at the races. Horrific events, like at the 1904 World’s Fair, at Le Mans in 1955, or at any track where lives were lost tended to force wholesale changes regarding how spectators interpreted the sport. After the 1955 Le Mans deaths, the nation of Switzerland banned motorsports. This ban is still in effect today.

For some people (those whom Barney Oldfield called “vultures” because of their “outright bloodthirst”), racing was a violent spectacle to revile because it focused on the constant potential for physical peril for all those present. For others, racing was to be celebrated because it tested humans and machines against each other – a pivotal reflection of a modernized, industrial society. This era is where the so-often-cited death wish versus life wish dichotomy took root, what race fans came to watch in growing numbers.

Spectator deaths are not uncommon, but they are also not so common that we cry, “No more!” whenever they occur. Since 1909, for example, there have been seven spectator deaths at the Indianapolis Motor Speedway. There was also one “innocent bystander fatality at IMS during that period: in 1931, a twelve-year old boy was killed when a race car driven by Billy Arnold crashed. Arnold’s car threw a wheel and the piece bounced across the street, killing the child as he played in his front yard. Such is the power of sheer fate.

Even though automobile racing, like so many other events involving difficult-to-predict circumstances, focuses on continuous quality improvement, there are some variables (like the weather) that are nearly impossible to predict with any certainty. Despite such modern advances in satellite coverage, forecasting techniques, and personal communication technologies, we simply do not know just how severe a “severe” storm could be.

After matching the timing of events at Pocono with the time I spoke to my dad on the telephone, the thunder and lightning that passed over his house while we chatted about the Pennsylvania 400 was likely the storm system that swept over the speedway, shortened the race, and injured people. It was also likely the same storm system that handed Jeff Gordon his first Sprint Cup win of 2012, putting him in position for a “wild card” spot in the upcoming “Chase for the Championship” while, at the same time snuffing out the life of 41-year-old Brian Zimmerman of nearby Moosic.

Should we blame NASCAR? Not at all. Should we blame Pocono Raceway? Nope. Should we blame Brian Zimmerman for standing near his vehicle when the fateful bolt stuck him? Not in the least. Given unsettled weather patterns – driven, perhaps, by the fact that over half of the United States is experiencing significant drought conditions – such severe storm systems are not out-of-the-ordinary.

The Chicago area has suffered its share of wildly-turbulent weather systems lately. I drove through the region as hundreds of thousands of people lost electricity early last month, and just this past weekend storms forced the evacuation of Lollapalooza in Grant Park. Do we blame the Red Hot Chili Peppers for that? No, just like we shouldn’t point a finger of guilt at either NASCAR or the management at Pocono Raceway. All those folks have been vigilant over the years in improving spectator safety as best they can; instead, the blame lies elsewhere.

So who’s guilty? In this case, it’s Mother Nature, and – like it or not – she always gets her way. The tragic fate that befell Brian Zimmerman could have befallen any one of us in one swift, final heartbeat. So don’t worry, race fans; pack up and head out to Watkins Glen International this week. As long as the weather’s favorable, all the catchfences and gravel pits will do their jobs.