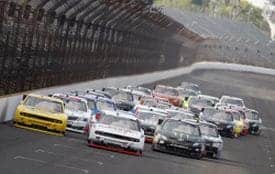 Growing up, I can recall a number of songs that first came to me via NASCAR. Whether it was from watching one of the race broadcasts (Metallica’s “Fuel”) or playing one of the sport’s licensed video games (“Flirtin’ With Disaster,” Molly Hatchet), there were many songs that I associated with NASCAR early on, even though most weren’t specifically NASCAR-themed (of course, there’s all that Creed that was played at Michigan International Speedway’s Skoal tent when I was younger, but that’s another story entirely).

But pause for a moment and try to think of any such songs that have surfaced in the last few years. Tough, isn’t it? I’m not saying that none of the more recent tunes are memorable, but that’s the case for the majority. I can think of “T.N.T.” by AC/DC, for instance, but that’s really more of a play on the TV station on which the given race was broadcast — and anyway, the video that accompanies it is kind of pointless. I think an argument could be made for Rascal Flatts’s cover of “Life is a Highway,” but that’s about it.

Want some music to get your engine revved for racing? Kevin Rutherford has some suggestions.

I’m not saying I have all the answers to fix this issue — far from it. However, I can think of a handful of newer songs (meaning released in the past few years) that would find good homes on a race broadcast or as a new pump-up anthem for fans. The music in question isn’t expressly about NASCAR or even racing, but much of it fits with the sport’s tradition of country, rock or a mix of the two, and are sure to get you in the mood for some kind of adrenaline-laced activity in some capacity.

I’m sure you’ll disagree with many — and if that’s the case, fire away in the comments about what songs you either listen to now before or at races, or would like to hear on video games, televised races and the like.

I go with this 2011 AWOLNATION track chiefly because I’ve heard it in similar capacities and it’s worked well, which leads me to believe that it would find a good home on, say, a NASCAR broadcast if it hasn’t already. Aaron Bruno’s raw ‘n’ raspy vocal is fitting for imagery of impassioned racing and harsh crashes despite its inherent slower tempo.

Though they hail from California, the men of the bluesy Rival Sons could fit into the excesses of southern rock rather easily. The first cut from the band’s debut album invokes the feeling of a fast-paced fling through the country’s back roads or deserts, complemented with lyrics about swerving around in a Cadillac. Not that I encourage dirty driving or anything… right?

Racing broadcasts are often flanked with heavy-hitting hard rock tunes, with Metallica the reigning king in that regard. This tune from a Danish heavy metal act may not disrupt that crown, but it with chugging guitars and rallying cries of “Fight!” and “Let’s get ready to rumble,” it’s not a stretch to hear Volbeat at your nearest track — or perhaps at Bristol driver introductions.

Country music has always been a staple of NASCAR racing. There may not be as deep a pool of worthy tunes from the genre as in years past, but Zac Brown and company are always good for a barn burner of a song. In particular, the lead single from the band’s 2012 release fits the bill quite snugly. Don’t be surprised if this tune starts sneaking into broadcasts soon, in fact.

OK, so this song is easily one of the most over-the-top pieces of music to be released in quite a time — even by the British rock trio’s standards. But the lyrics are just too fitting to pass up here: “Race, it’s a race / and I’m gonna win,” sings Matt Bellamy. “Whatever it takes / you won’t pull ahead / I’ll keep up my pace.” His guitar solo minutes later seals the deal. Easy to see why this was chosen as the official song of the 2012 Olympics.

Burn the aggressor, he put dubstep on a list of NASCAR songs! Call me crazy here, but I see this fitting on a race broadcast at least, just as many of the American DJ’s tunes already have within other sports. It may be outside racing’s usual demographic when it comes to music, but damn if it doesn’t get one’s adrenaline going when really letting oneself go. Plus, wubs are a crash montage’s best friend (not that we’ve had much use for them in 2012).

Dave Grohl’s band of merry music makers delved into a love of ’80s hardcore punk on 2011’s “Wasting Light,” accentuated by this feverish heavy-hitter. Amidst cries of “Go limo!” and driving percussion, dense guitar riffs push and prod the song to a howlin’ conclusion. I can easily imagine this song on a NASCAR-themed video game, and if you happen to play it while driving… well, those other drivers better hold on.