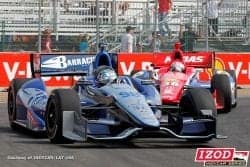 Prior to the Mid-Ohio IZOD IndyCar Series race on August 5, Randy Bernard, the CEO of the series, stated that more races are needed for the series to be successful. He intimated that 15, the number on the schedule this year, is not enough and that he’d feel better if the number of races totaled about 20.

Fair enough. That seems like a smart, if not obvious, comment. To keep fan interest up, there must be enough of a product to, in essence, keep them reminded that it’s still out there. That only 15 races grace the schedule this year is problematic, and the swift reaction to reconsider fast oval tracks due to Dan Wheldon’s on-track death last year is a large factor. But it also seems that INDYCAR was caught without contingency plans, and that’s when an organization gives a sense, whether it’s true or not, that it is floundering.

Perhaps the biggest problem with the IndyCar Series, however, is not the races and lack thereof, but something more simple – and easier to fix: the schedule. For the Mid-Ohio race, the series got lucky.

That’s right, lucky. Because somewhere, in someone’s infinite wisdom of trying to increase exposure for the series, the race was scheduled to go head-to-head with NASCAR’s Pocono whirl. And what happened? Rain in Pennsylvania.

The weather at Pocono meant that the NASCAR race was moved back a few hours, permitting race fans who were channel surfing in order to avoid rain-delay coverage to find the IndyCar race. And those fans that did switch to ABC from ESPN were treated to a caution-free race that came down to a late pit stop between Will Power and Scott Dixon.

Here’s what’s even more unnerving – ESPN and ABC are the same company! Auto racing fans are a select group, making the decision to have both races on at the same time a questionable call. Why split your audience? That is not to say that every IndyCar fan is also a NASCAR fan or vice versa. It’s just to point out that many people do watch both series.

Some enthusiasts just enjoy racing. There’s a reason that the Grand Am series is televised, why the NHRA has viewership and in an overall sense, that the SPEED channel exists. For INDYCAR to continue to try to host races during the same time slot that NASCAR does just seems counterproductive.

What INDYCAR has failed to recognize is that you don’t go toe-to-toe with the 800 pound gorilla in the room – you dance around him. But the whole scheduling thing goes a little further.

For starters, NASCAR had kept a rather similar schedule since 2001. Sure, they tinker with it, but there is the element of predictability, and to casual fans that makes things easy. With predictability comes less thinking and more of an expectation. Right now, the IZOD IndyCar Series feels unpredictable.

It should be noted that the fixes for the IndyCar Series schedule are not all that difficult. First, check the NASCAR schedule. It may seem like working from a place of weakness to kowtow to the NASCAR series, but in truth it’s a marketing strategy. To revisit the NHRA, it should be recognized that many of their marquee events are shown tape-delayed on ESPN and interest in that series has continued to climb. They know they’re not the alpha and they’re not fighting it.

So after INDYCAR figures out when not to race, it becomes easier to determine when to throw the green flag. Here is another area the series has seemed to botch occasionally: the start times.

Apparently someone in the scheduling department believes that all the IndyCar fans are on the east coast. Perhaps that is the case, I haven’t seen a demographic breakdown of IndyCar fan interest (if there actually is one). But to overlook the west coast is to once again limit potential.

The start times for the races this season have seemed to have ranged from 11 AM to 9 PM EST. That’s a pretty big window. So maybe if that window was narrowed a little bit it would help with that concept of predictability mentioned earlier.

It may seem like heresy, but the IndyCar races should be thought of, in scheduling terms, as some kind of companion events for NASCAR or even F1. One of the best days on the racing calendar is Memorial Day Weekend. The day begins with the Monaco Grand Prix, continues with the Indy 500 and ends with NASCAR’s 600-miler (or whatever it’s called this year). That seems like an excellent strategy. INDYCAR should look to make some more weekends like that.

Nothing posited here is revolutionary. It’s just the idea of being aware and that seems to be one of the things that is lacking. Of course, if those involved in bringing us the series aren’t so aware, it’s no wonder that so many fans are in the same spot.