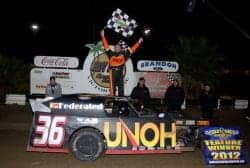 We just got dirt racing this year. The DIRTCar Summer Nationals for the modifieds (is a series of races where the points are for) your ten best races. We had run nine races. I really like the Summer Nationals because they race a lot during the summer-28 races in 32 days. I wasn’t thinking about the championship, but we just got to racing and all of a sudden we started winning. We won like three out of five and all of a sudden I looked and I was only 39 points out of the lead. Well, my competitors had all already run ten or more. So I decided to go for the championship.

It was a crazy story because on Saturday, I had to be at a one hour Speed TV production meeting at Loudon. So, I came to the meeting and the stars aligned perfectly: Tony Stewart was flying to Eldora and the plane was literally going right over Toledo. So Tony just let me ride in his airplane, he didn’t even ask for any money, and they landed and dropped me off. Now, my guys were in Indiana. I told them to turn around, and they turned around and drove five hours the other way. We showed up, ran second in our heat. It was a 25-lap feature and we led like 18 or 19 laps and then my car picked up a big push—I guess we had it adjusted wrong—and we finished sixth and pulled it off.

Kenny Wallace won the first racing championship of his career in this year’s Summer Series on the dirt.

It’s my first championship in racing. It feels good to win races and have a lot of second places. I told Darrell Waltrip, he called me “champ” and I said, “stop that!” I told him, you must be talking about my brother Rusty. I’m thrilled to death and really happy about it, but on the same token, it’s just different, because I finally accomplished something never knowing it was coming. Usually, you try really hard, you know, ‘we’re going to go fight for a championship.’ This one here, I didn’t really know I was going to do it until we got going, and then I was like, “let’s do it,” you know?

I had two choices this year: to cry over spilled milk or not. I went into this year thinking I was going to run the whole Nationwide Series. I could have cried over that; I was a little bitter for a couple weeks, but then I said, ‘well, I always wanted to go dirt racing, and now was the perfect time. I think the difference is that we’re kind of just doing this ourselves and having fun with it. You always want to run good, but you, know, NASCAR is the show. People always ask me do you like dirt or asphalt. Well, I like NASCAR for the money, and I like dirt for having fun and for the camaraderie. I’m just having a lot of fun. There’s a lot of friendship when you’re dirt racing.

This month, I ran the NASCAR Nationwide Series race at Chicago, and we had a great race and finished fourth. Then, we raced at Indy and finished 19th. Indy was a fun race. We went there knowing that we were with a mid-level team. The deal was for me to be in the very first NASCAR Nationwide race at Indianapolis Motor Speedway. We got more than we could have ever asked for. We finished 19th, but we were about a 30th-place car, and we made the car better. I thought, when I look in the record books, 19th isn’t going to be horrible. That was a lot of fun. I want to give a shoutout to everyone from Family Farmers and American Ethanol for making that come true. I wanted to run that race.

I’ve also been doing a lot of TV, and that is a lot of responsibility! The last two weeks have been mostly about responsibility and taking care of business. I left Indy on Monday and went to Iowa, and for five straight days, I was the U.S. Cellular cell phone spokesperson. Every day, I signed autographs all through Iowa at all kinds of different U.S. Cellular stores.

Then after that, I took off to Pocono. I flew with Sam Hornish, Jr. on Saturday night and had a good time up there doing TV. Of course, that race was capped off with a tragedy, with the lightning storm and a fan losing their life. That was devastating.

I was able to make it home for a couple of days. I went up to Sauble Beach in Canada and finished eighth in an asphalt short track race last Wednesday. That was a lot of fun. From there, I visited Toyota dealerships all over New York, and then I went to Watkins Glen for TV, and here I am now at home.

Like I said, I guess my month would be called “Taking Care of Business!”

I’m really excited about Billy winning! Billy Smith is my crew chief on my dirt car. What we did was, we’ve been really working hard on the development of the Toyota dirt racing motor. Billy races every Saturday night. I’ve run the motor twice, and the best I’ve run was second. So we put the project together where we put the Toyota motor in Billy’s car, and we’ve been working really hard with it and with Willy’s carburetors. Willy’s used to do all of Joe Gibbs Racing’s carburetors before they went to fuel injection. They helped us gain a lot of bottom-end torque; what we were looking for was takeoff. The Toyota has a lot of power, but we had been looking for was takeoff power on restarts. We’ve gained a lot, and Billy won on Saturday! He thinks it’s a lot better. I’m going to run the Toyota motor again in October at Lakeside, Kansas. We’ve done a lot of work on it.

This week, I’m leaving Wednesday; Kim is going with me and we’re going to race in Ogilvie, Minnesota on Wednesday, Rice Lake, Wisconsin on Thursday; Friday is Lincoln, Illinois, and then on Saturday, I’m really excited. It’s been 30 years, and I’m going back to the site of my very first race ever, which I won in 1982. I ran the race at the Springfield, Illinois dirt track, a one-mile oval. I won that race in ’82 and then I never raced again until 1986. So I’m excited. We start practice at ten in the morning and we race at noon. Very seldom do we get to race on dirt in the daytime.

But the biggest thing, the most exciting thing that has happened to me this summer is that my daughter Brooke is engaged! We’ve got a tentative date for January of 2014. So Kim and I and Brooke and Jacob, and his parents, Jack and Donna—we’re all so excited! We’re looking forward to the future!