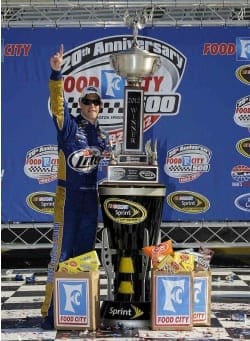 _Brad Keselowski has taken to Bristol Motor Speedway like a duck to water. After finishing in the teens in his first three races at the speedway, he has taken home the big trophy the last two times he raced there in the Cup series. Keselowski led 232 laps in the Spring race on his way to a dominating victory, including the final 111 laps of the race. Keselowski’s crew chief, Paul Wolfe has certainly had the concrete oval figured out, but the newly reconfigured track is going to throw a whole new set of circumstances at the No. 2 team. Keselowski did qualify in the top 10 in both of the races he won, which is going to be at more of a premium now that passing is going to be much harder thanks to the single groove race track facing teams as they return to Bristol for the Night Race._

Brad Keselowski and Paul Wolfe have dominated at Bristol but will face a reconfigured track this time around.

_There are several things to think about heading to Bristol and Frontstretch caught up with Wolfe at Indianapolis to touch base on what he’s thinking about as the series heads back to the World’s Fastest Half Mile. The ground racetrack is certainly going to present a completely different set of circumstances that Keselowski and Wolfe have never faced before. They aren’t going to beef up their bumpers and aren’t worried about power. They are planning on focusing on great fuel mileage and making the car turn so that they can stay on the bottom because the top of the track is not an option._

Mike Neff: *They have monkeyed up the track at Bristol, grinding the top groove and eliminating the progressive banking that has led to two wide racing on the concrete oval for the last five years. Do you think that change is going to have a significant affect on the racing when we get there?*

Paul Wolfe: From what I have heard from the guys who have tested there it is probably going to make a difference. We won’t really know until we get there and see it for ourselves but there is a good possibility that it is going to change it up and put a big importance on being able to run around the bottom which, in the past, is what you had to do. Luckily for us we were able to run well there on the bottom earlier this year. I just think it is going to make passing a LOT tougher than it has been.

Mike Neff: *In the past you used to reinforce the nose and the tail a little bit more. However, since you haven’t had to bump people over the last few years, but it looks like it is coming back, are you going to put some extra support into your car knowing you’re going to have to probably move people to get by them?*

Paul Wolfe: I don’t expect to build anything differently than what we already build. These cars are already built pretty solidly with all of the rules that NASCAR has. There won’t be any changes to the No. 2 car, I don’t know what everyone else is thinking but we’ll be bringing similar stuff to what we’ve brought the last few races.

Mike Neff: *With the track being ground at the top, is that going to completely eliminate that lane or is it going to be a possibility that, if you can’t seem to get by someone you can throw it up there for a lap or two and maybe make something happen?*

Paul Wolfe: It sounds like it is going to be no lane at all up there. I know the No. 14 did the tire test and from what I could dig around and find out it sounded like there wasn’t any grip at all on the surface that was ground. I guess we’ll have to wait and see until we get there but don’t expect to see the top lane work like it did in the past.

Mike Neff: *Our mandatory weekly EFI question. Second time there with the EFI system, did you learn anything the first time? Has the mapping changed to allow you to get off the corner a little better or is it still a work in progress?*

Paul Wolfe: We’re still working with that. The biggest thing for us is trying to get max power while still maximizing fuel mileage. It seems like anywhere we go these days, better fuel mileage gives you more options during the race to play out different strategies. Whether it is at a short track or here at Indianapolis, fuel mileage is always something we work hard on and we’ll continue to focus on that.

Mike Neff: *Do you put a lot of travel in the car at Bristol or, since it is so compressed in the corners do you try and keep it down on the straights as well?*

Paul Wolfe: For us, Bristol has been pretty much a mechanical grip type of race track. We don’t focus a whole lot on that, it is just more about getting the mechanical grip into it and making it turn in the center.

Mike Neff: *Having a driver who takes well to a track tends to give greater confidence to the whole team in general. How much does it help knowing how confident Brad is heading into Bristol?*

Paul Wolfe: Any type of racetrack where the driver feels strongly about the track or knows they have had a lot of success there gives them confidence and we look at it as an opportunity to win another race. For us, right now, the more races we can win the more bonus points we’ll have going into the Chase so we don’t want to be foolish about decisions we make but we’re going to roll the dice a little more if it gives us an opportunity to win a race.

_Heading to a track where you’ve won the last two races and having no idea what it is going to present is a very unsettling feeling. The No. 2 team has been a force at Bristol for the last two races but this weekend’s event could be completely different from anything they’ve faced so far. The fans aren’t the only ones heading into this weekend wondering what the race is going to be all about. The Blue Deuce is hoping that they’ve still got something to keep the rest of the field at bay._