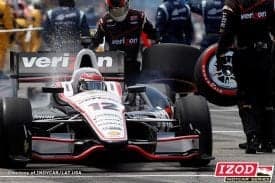 The IZOD IndyCar Series returns in full force this week after a three week hiatus. The teams and drivers are heading out to Sonoma this week for the GoPro Indy Grand Prix of Sonoma, and as we inch closer to the end of the season, championship contenders such as Will Power and Ryan Hunter-Reay know they have to make every week count in order to win the title. The big news going into the race this week is the track configuration change that was ordered by INDYCAR. Turns 7, 9, and 11 of the Sonoma course were all reconfigured to make the event racier and to promote more passing.

The changes have drawn positive reviews thus far, but it remains to be seen if the changes truly help. Also in the news this week was the revelation that a group of IndyCar Series owners have apparently organized as a group and are prepared to buyout the IZOD IndyCar Series. This is all speculation at this point, but given the tumultuous history of this series, it certainly wouldn’t be shocking, to say the least. Finally, INDYCAR released a technical bulletin earlier this week announcing a slight change to the push-to-pass system. The delay between activation of the system and deployment of boost has been trimmed from five seconds to 3.5 seconds.

Located in the heart of North California’s Wine Country, Sonoma Raceway is one of America’s premier road courses. Opened in 1968 by a group of local investors, the track has played host to a variety of major motorsports series, including INDYCAR, NASCAR, AMA Superbike, and the NHRA. The IZOD IndyCar Series has been racing at Sonoma since 2005, and Will Power has been the dominant driver at the track as of late. Power took the checkers in both the 2010 and 2011 races here, and he looks to go for a three-peat in this year’s event.

A strong second place finish in Mid-Ohio put Will Power back atop the points, but can he stay there this week in Sonoma? Credit INDYCAR/LAT USA

A strong second place finish in the last race at Mid-Ohio vaulted Will Power back into the series points lead. He has a slim five point advantage over second place Ryan Hunter-Reay, who had a disastrous weekend in Mid-Ohio. Helio Castroneves sits third in the series standings, and sits only 26 points out of the lead. Scott Dixon is fourth, and after his victory in Mid-Ohio he is now only 29 points out of the lead and making a strong push towards the title. James Hinchcliffe rounds out the top 5, and he is a distant 63 points behind Power.

Scott Dixon’s victory in Mid-Ohio helped Honda creep a little closer to Chevrolet in the standings, but this one looks to be pretty much a done deal. Chevrolet teams Team Penske and Andretti Autosport have dominated all season long and have carried the load for the manufacturer, and Chevy has a 12 point lead over Honda in the standings. Lotus is, of course, an ever distant third in the standings, an astounding 52 points out of the lead.

What do you know! My weekly pick won the last race! Bow before my clairvoyant greatness! OK, on a serious note, Scotty D threw himself back into the title conversation last week with his win in Mid-Ohio. Dixon has been one of the most consistent drivers in the series this year, and if not for some bad luck and mechanical gremlins he could very well be leading the series standings. Dixon has won a title before, so he knows how to get it done. With three weeks still left in the season, only 29 points to make up, and a lot of title contention experience to fall back on, Scott Dixon seems like a pretty good dark horse pick for this year’s title.

Mid-Ohio and Sonoma have a lot of similarities. With that in mind, I will once again pick Scott Dixon to win this week. Toni Montgomery thinks Will Power will take advantage of a track he likes to pad his championship lead with another victory.

Surely you all have heard about the Jay Penske fiasco by now. In case you haven’t, Roger’s prodigious sons Jay and Mark broke into the Nantucket Yacht Club and allegedly assaulted two women outside the club. Both were arrested later that night. Needless to say, don’t be surprised if Jay Penske is absent from the race track these next few weeks.

After the IndyCar Series’ tour through Wine Country is complete, the teams and drivers will head back east for the Baltimore Grand Prix. The Baltimore race very nearly missed the cut for this year’s schedule, but luckily a deal was ironed out to ensure the race returned. It’s a good thing it did, as Baltimore put on a great show last year and is a great venue for the sport. The Baltimore Grand Prix is next week, September 2nd, and you can catch all the action live on the NBC Sports Network.