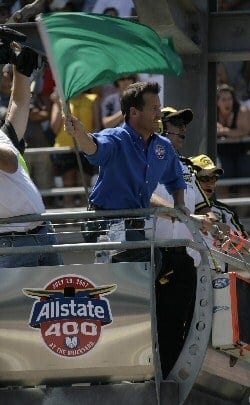 An old friend from the Indianapolis area, Carl Jackson, wants to know why NASCAR seems reluctant to use “local” yellow flags on road courses.

There have been many people commenting on the issue, post-Montreal so I figured maybe I’d toss in my two cents.

Working with SCCA and other road racing bodies in my fifteen years at Indianapolis Raceway Park, I got fairly familiar with their procedures. I made an effort to learn as much as I could about it, especially because we had open test dates prior to their road race weekends. I served as either race control or chief starter on those dates, and felt I should know what the participants were expecting. I found out it was usually quite different from an oval racing outlook.

Waving the flags on a road course isn’t just for any random celebrity. There’s a whole set of complex rules involved, a set of procedures that’s always difficult to get NASCAR oval track regulars to understand a handful of times a year.

John Best of Anderson, Ind., was one of our freelance photographers, one of the sharpest shooters I’ve known, and we became close friends. I appointed him as our “Photographer Liaison” for the oval track. That took some pressure off me – one area I didn’t have to deal with. John knew racing and photography, meaning the shooters could take their questions directly to him. If he couldn’t answer them, he came to me. The two of us switched back-and-forth from Start/Finish to Race Control.

Sorry for digressing, but John’s one of those guys I really miss these days. He was also Flag Chief for SCCA’s Indianapolis Region, becoming a great source of information for me as I learned the ins and outs of road course flag procedures.

Getting back to Carl’s question, I suspect that NASCAR’s reluctance to use a local yellow – one which applies to only a certain area of the road course – has to do with acclimating the drivers to its use. They’d have to know exactly what those flags mean, and they’d have to deal with it for only a couple of times each season.

Now, as I recall there are two types of local yellows – A “standing” yellow and a “waving” yellow.

A standing yellow is shown with the corner worker simply holding the flag out there stationary. This scenario means there is a car _off_ the racing surface; drivers must slow down and not pass until the next flag station.

A waving yellow, with the corner worker waving it (simple, huh?) means that the disabled car is _on_ the racing surface. Drivers must slow down and not pass until the next flag station.

A full-course caution is shown by two yellow flags held by the same worker, in the same hand. This procedure is done by holding both flag handles and displaying them at opposite ends of the hand.

Whether or not these rules could work with drivers who’ve never been exposed to it, and whose attention span sometimes lasts about a lap, I’m not sure. Explaining things thoroughly at a drivers’ meeting doesn’t always get through.

(Digressing again – the most attention I ever got at a drivers’ meeting was before an ASA race on the Milwaukee Mile. We had experienced some problems with drivers ignoring the layover flag – and we didn’t consider it to be just “advisory.” I told the drivers I was going to use a new flag signal in this instance. The third time a car came around after having ignored it twice, I was going to hold it out there in my left hand, all while I pointed a rolled-up black flag at them with my right. I explained, “That means you’re p#$&ing me off!” It got attention, and it worked.)

I would like to see NASCAR try the local yellow concept, and it brings up some interesting other possibilities.

By the way, there are a few more flags in a road race flagman’s bag than we usually use in oval racing.

First thing I learned was that a white flag didn’t mean one more lap. It meant there was a slow vehicle on the course. This would be shown at Start/Finish and at the corner where the slow vehicle was located; corner workers would “cover” it as it went around. It could be a wrecker, a cleanup truck, or even a slow car.

If it was an ambulance, the white flag would have a red cross on it.

There were also two different black flags. There was one with a red “meatball” in the middle of it, used to indicate a mechanical problem, while a plain black flag was simply for disqualification. A flagman could also use a rolled up plain black flag, pointed at the car intended (see previous Milwaukee comment). That gesture essentially means, “Clean up your act or we’ll unfurl this thing.”

Also, there’s the “condition” flag, with black and yellow stripes. This means, as you may expect, that there is oil, water, fuel, sand, or something on the track which is likely to make things a little slippery. That may have come in handy at Watkins Glen.

In my own career, I had to use that flag once because of droppings left by a flock of Canada geese who had wandered across the first turn between sessions, unnoticed by the workers at Station One, between the first and second turns. The first indication that there were problems was a Lotus Seven doing some wild 360s out through the grass.

I also recall having to black flag a Ferrari at an open practice once for taking the wrong route. Only problem was, I picked up the wrong flag; the car owner was understandably furious. Turned out he wasn’t as mad as the Italian driver, though who stormed up to me and shouted, “You gave-a me de meat-a-ball!”

Lot of laughs in those fifteen years.