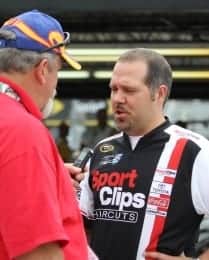 _The track surface at Atlanta Motor Speedway has aged well. While most of the oil and grip is gone from the racing surface, the speed is still there. Drivers have to deal with some of the highest speeds on the circuit with some of the least grip. Darian Grubb knows that the amount of grip can change dramatically during the weekend, especially when the almost guaranteed rain storm moves through at some point._

_For this week’s Tech Talk Grubb touches on adjustability, inner liners and a brand new car. Making a car go around Atlanta well from the beginning to the end of the Labor Day race that goes from daytime into night, on a track surface that changes with the amount of rubber being laid down is a challenge. Grubb did it successfully when he was on the box for Tony Stewart and he hopes to do it again this weekend with Denny Hamlin._

Darian Grubb, coming off a Bristol high, is ready to set up the No. 11 for Atlanta.

Mike Neff: *Atlanta still has very high speeds even though it is an older racing surface. Does the lack of grip combined with the high speeds make it a more difficult track to prepare for?*

Darian Grubb:That is what makes it one of the coolest tracks on the circuit. It is worn out but you still have that much speed so it really leaves it in the drivers’ hands. They have to wheel it and see what kind of grip they can find but they’re going 210 mph while they’re doing it. It is pretty cool that it puts some heat on them to be able to figure it out.

Mike Neff: *With there being that much age, and with age comes some bumps and character, do you have to have more flexibility in your setup to be able to handle whatever the track throws at you on a given race day?*

Darian Grubb: You definitely do. You have to have a lot of adjustability built into the car because the track conditions can change a lot as the rubber gets laid down. Especially if there is any kind of rain during the weekend the conditions will change drastically from practice to the race. Conditions are always changing and track position makes a big difference there but it is great racing. You can see four or five lanes and guys can move around from one spot to another to make their car work. You have to have the adaptability in your setup in order to take advantage of that.

Mike Neff: *To get that flexibility built into your setup is it more from spring rubbers, shock adjustments or something else?*

Darian Grubb: It is a little bit of everything. Spring rubbers are something you try and do as a last resort. You have them in there but it definitely slows down your pit stop to be able to get them in there. So you’re trying to get everything you can get without having to use them. Shock adjustments and things like that also take a lot of time on pit stops so you try and keep things within wedge, track bar and air pressure but those things are still limited so you try and do as much as you can with the setup and hope to be able to have fast pit stops as well.

Mike Neff: *We run inner liners at Atlanta. Does having an inner liner in a tire give you another level of flexibility? Does the amount of air in the liner affect how the tire reacts?*

Darian Grubb: That depends on how people accept theory. There are some people who think it really does and some people who think it really doesn’t. It is a matter of personal preference and past history. If it is something you feel like is a tool that you have to work with then at least you can do that as another adjustment which lets you think you have one more tool on your side even if it is more of a comfort thing.

Mike Neff: *It is two races before the Chase. Are you rolling out your Chase cars to see what they are going to have for the competition?*

Darian Grubb: Yes, we’ve been working really hard to build a whole new fleet this season. Going into Atlanta we have another new car going in there. Hopefully we’re going to have a few really good pieces to roll out for the Chase. We’re going to have history with at least a race on every one of them so that we know what we’re going to have for them as we roll out at each race track.

_Coming off a win at Bristol, Grubb and the No. 11 crew have to be feeling confident as they try and add even more bonus points to their total for the Chase. Hamlin had never won at Bristol before last weekend and Grubb is hoping he can cross another track off of the never visited Victory Lane list this weekend with a new car at Atlanta._