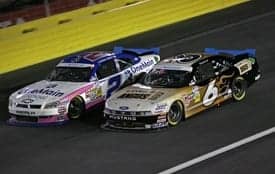 Two races, two championship battles, two sets of contenders racing hard with each other and two incidents, despite being nothing more than a product of short-track racing, that will go a long way towards deciding both the Nationwide and Cup Series championships. That is, assuming that both Elliott Sadler and Tony Stewart live up to their words.

Sadler and Stenhouse raced hard at Bristol, bending sheet metal and tempers. Is Elliott ready to throw away his championship? Desperate times call for desperate measures.

Sadler remarked that after being bumped by Ricky Stenhouse Jr. from second to fifth in the closing laps that the door was now open for him to race however was necessary for the duration of the Nationwide Series season. Stewart chucked his helmet at the No. 17 car after getting into an on-track scuffle, and proceeded to throw his defense of the 2011 Cup title out the window by telling the media he was going to spend the rest of the season running over Matt Kenseth every time he gets the chance. (Between Kenseth being in Stewart’s crosshairs and Stenhouse taking over the No. 17 car next year, fabrication for the former “Killer Bees” is primed to become the most secure job in the garage.)

Here’s the rub, all that anger is not the product of malicious on-track activity. Nobody was wronged in either of the incidents that stirred the ire of Smoke and Sadler. Sure, Sadler lost a shot at the win, Stewart came precariously closer to falling out of the top 10 in points and being forced to back into the Chase in a wild card slot…but come on! Elliott Sadler had a shot at the win and wasn’t fast enough to drive away from the field or pass Joey Logano on the final restart of Friday’s Nationwide race. Tony Stewart was raced hard by Kenseth before the two tangled and slammed the inside retaining wall. No one forced him to stay in the gas in the narrow gap between the fence and Kenseth’s Ford. Like it or not, short-track racing is always going to be close quarters. Using the bumper and using space to crowd a fellow competitor comes with the territory.

That type of racing is why the Bristol Motor Speedway has 160,000 seats surrounding it. Racing series that have been neutered the over past decade–like the Nationwide Series by a deluge of points races over by early summer thanks to Cup interloping and the Cup ranks by the Chase–are why those seats haven’t been full for years.

While Bruton Smith’s second reconfiguration in six years of the Bristol bullring will likely garner credit for what appeared on camera to be a larger crowd and the most active Bristol night race that has been run since the advent of the Chase in 2004, the reconfiguration had nothing to do with it. Rather, it took the Nationwide Series nearly a decade to get back to having a big-time title fight on their hands. For the first time since 2003, there’s a legitimate four-horse race for the crown. It took the Cup field nearly a decade to treat the Bristol night race more like a race and less like a Chase appetizer (need proof? Matt Kenseth raced awfully darned hard for a man who’s made his reputation on consistency and composure).

Had the Sadler/Stewart incidents occurred and fans, media and fellow competitors alike been spared their apparent vows of retribution, NASCAR could sit back and celebrate one of the few universally positive weekends the sport has been fortunate enough to have in 2012. Instead, there’s a shadow looming over two very compelling storylines heading into the final stretch of the season for both the big guns of stock car racing and the development ranks below them.

Ricky Stenhouse Jr. has a real chance of becoming the first repeat winner of the Nationwide championship since Martin Truex Jr. did it in 2004 and 2005. Matt Kenseth is having one of his stronger campaigns since winning his only Cup back in 2003, and is a legitimate contender to win a Cup championship as a lame duck driver on his way out at Roush Fenway Racing. Now both of them have to look over their shoulders at two drivers irrationally upset over short-tracking.

There’s few quotes that are going to get more mileage than Brad Keselowski’s post-race remarks at Watkins Glen that he was thrilled to race with Marcos Ambrose because he was one of the few drivers out there that can race, trade paint…and not get so hot under the helmet that he’d end the other guy’s day. One can talk about track reconfigurations, narrow grooves on repaved ovals, kit race cars… However, there still is something else that can utterly derail stock car racing…90% of the drivers out there today aren’t capable of trading paint.

The bump-and-run has the Nationwide Series points leader vowing that the door is open to do whatever to one of his competitors. Hard racing has the defending Cup champion seemingly disavowing his team’s current struggles on-track and his unstable position in the points to promise revenge for the remainder of the season (not to mention saying to hell with the fact he chucked a thousand dollar piece of equipment and didn’t give a damn whether he got it back). The Chase doesn’t help, but this type of reality is why the Bristol night races have been essentially castrated for years.

Both Sadler and Stewart are teetering on desperation. It’s a desperation that most would kill for, but desperation nonetheless. Sadler is 2/3 of the way home to securing the elusive Nationwide title he hopes will catapult him back to Cup, but he’s also holding back a deeper field of contenders than has been seen in recent memory. Stewart is a lock to make the Chase, but between he and teammate Ryan Newman, Stewart-Haas Racing is ice cold with the playoffs looming. Desperate men get emotional, and emotions lead to unjustified grudges being held with destructive consequences.

That reality may well have Matt Kenseth and Ricky Stenhouse Jr. thinking twice the next time they dare show aggression on the track. How does that benefit the racing…or the fans?