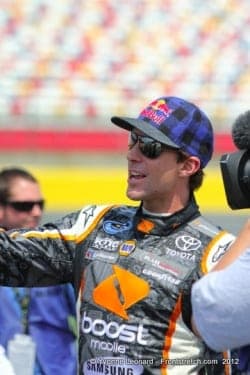 *ONE: Pastrana’s Roush Deal the Latest Scramble for Cash*

Travis Pastrana is returning to Nationwide Series racing this weekend in one of the most storied rides the series has to offer; the No. 60 of Roush Fenway Racing. Despite having scored no top 10 finishes in his brief NASCAR career, Pastrana is getting the seat that Trevor Bayne was pulled out of earlier this year due to sponsorship woes.

Travis Pastrana’s appearance in the Roush No. 60 signals one thing: No team is safe from sponsorship woes right now.

Why? Because the former X-gamer brings the dollars to go on the racecar. The same type of deal that teams in the back of the garage have been cutting since Daytona to stay on the track is now being pulled by one of the most gargantuan operations in NASCAR’s AAA, and the defending series champions at that. RAB Racing’s already insecure future in the sport (they’re relying on John Wes Townley for crying out loud) is now even more so with their biggest-name prospect being courted by a powerhouse.

Coupled with the well-publicized news that Tony Stewart was losing his primary Cup backer in Office Depot after the end of this season, the sponsorship crunch facing NASCAR’s race teams is reaching critical mass. The Stewart-Haas Racing organization has only one funded driver for 2013 and her name is Danica Patrick (good luck trying to develop her without teammates at the Cup level.) Roush Fenway Racing is out poaching from the middle-tier of the Nationwide Series garage, and the one Nationwide Series driver they are promoting to Cup is currently unsponsored. RCR’s fourth Cup car isn’t going to happen unless something changes. Same for JGR’s fourth car. And Penske Racing’s third car.

Get used to double digit start-and-parks in all NASCAR series the way things are going next year.

*TWO: Darian Grubb Has Figured Out This Chase Build-Up*

While all the talk has surrounded Jimmie Johnson’s drive for six and the struggles of names like Stewart, Gordon and Edwards to try and squeeze their way into the Chase, Denny Hamlin has come out of nowhere to score consecutive victories and a wave of momentum heading into his home track at Richmond. The No. 11 team is now the hottest team in the garage and seemingly primed to make a trophy run starting in Chicago.

Problem is, it’s tough to establish this as a case of Hamlin being poised to challenge Johnson after letting the 2010 title slip away in the closing weeks. Hamlin and his No. 11 team have won big before, grabbing momentum and positioning themselves beautifully (think Texas in 2010) before making mental mistakes down the stretch. And seeing as how their wins this season have come at a time when the pressure is effectively off (the No. 11 was going to make the Chase with or without Bristol and Atlanta victories), it’s too early to call whether or not the driver and team have truly learned from their unraveling two years ago.

What is clear though is that Chad Knaus’ tutelage has rubbed off on crew chief Darian Grubb, because he’s figured something out about peaking at the right time. No one needs to be reminded how the No. 14 team he led, with Tony Stewart behind the wheel a season ago, shook off a forgettable regular season only to win five of the final 10 races and a Cup title. Now, after 23 weeks under the radar, Hamlin and Co. are fast becoming a top 5 fixture with a real shot at leading the Chase field into the final 10 races. Winning three in a row is a likely scenario given the driver’s prowess at Richmond.

Two different teams, two different makes, two very different drivers…both peaking at the right time. Give the man on the box credit where it is due.

Granted, the Atlanta Motor Speedway has never sold out the Labor Day race since they were awarded it following the failed Fontana experiment. But boy, they’ve sure done better than they did this past weekend. The frontstretch grandstand was visibly spotty both high and low from turn 4 to turn 1 on Sunday night, making any argument by NASCAR look, well, false that attendance for the event was up.

It’s nothing new despite being a track with a reputation for close finishes and being deep in NASCAR country, but Atlanta’s been fighting attendance shortages for years (there’s a reason the track only has one Cup race now). Take one look at the weekend’s sports docket in Atlanta and it’s not hard to understand why the stands looked so sparse on Sunday night and why NASCAR may well need to look elsewhere (like Darlington) to move the Labor Day race.

Friday night and Saturday night both saw Atlanta playing host to major college football games at the Georgia Dome. The Atlanta Braves baseball team was in town all weekend along, in the midst of both Chipper Jones’ farewell season and a heated divisional race with the Washington Nationals. Meanwhile, when the checkered flag flew on the 500-miler at Atlanta Sunday night, 11 of 12 spots in the Chase were locked up. The suspense that may well make Richmond crazy this coming Saturday was notably absent under the lights at AMS.

That makes NASCAR a tough sale when sports fans had a buffet to choose from in Atlanta. And it’s not going to get any better next year either, those Chick-fil-A Kickoff games aren’t going anywhere.

*FOUR: NASCAR Must Be Hands Off This Weekend*

Atlanta’s curse is Richmond’s gain. There’s only one Chase spot open for seven drivers to nail down following 400 laps at Richmond this weekend, with a number of them needing not only to beat their competitors in the points but win the race outright. Considering that reality, it wasn’t surprising to hear Carl Edwards all but apologize to the competition in advance following his engine failure at Atlanta Sunday night, all but admitting he was going to be racing all over the ragged edge to try and snag a win and a Chase berth.

Edwards isn’t the only driver facing huge pressure to pull out a Chase miracle at Richmond. Ryan Newman needs a playoff berth desperately, as his home at SHR is in even greater danger after the announcement that team sponsor Office Depot was leaving. Jeff Gordon’s marathon effort to recover from an awful start to 2012 is close to proving all for naught, even with a Pocono win on the books. Even Kasey Kahne is on less than solid ground despite having two victories in 2012.

The chances of a driver taking matters into their own hands to make the Chase are very high. And should that situation come up, NASCAR has to be hands off.

Though if they did, they’d never have to worry about Jr. missing the Chase again.

He’s leading the points and a contender for race wins every single weekend. Yet, despite that, Elliott Sadler will not be returning to Richard Childress Racing in 2013, instead being linked to a Nationwide ride at Joe Gibbs Racing that comes with a part-time Cup deal.

On the one hand, Sadler could be commended for thinking ahead. After all, with Ty Dillon threatening to follow in his brother’s footsteps and win a Truck Series championship at a very young age, the inn at RCR is starting to fill up in the lower tiers. Plus, if it comes down to Sadler or Austin Dillon for a Cup seat, it’s not even a contest–blood is thicker.

On the other hand though, one can and should rightfully question whether Sadler’s seemingly adamant stance of returning to Cup racing is realistic. Sadler got a Cup shot earlier this season in the Daytona 500, and within the first 10 miles of that race triggered a massive crash and drew the ire of many series regulars he used to race with. What’s more, Gibbs equipment or not, a part-time Cup deal is not going to be a turnkey operation that produces top 10 finishes. There’s also a question of focus. Sadler’s being counted on as a veteran figure for Austin Dillon to lean on as he continues his driver development at RCR, while at Gibbs he’s going to be a small fish in a pond that now includes Rowdy, Denny Hamlin and soon to include 2003 Cup champion Matt Kenseth.

This one’s a lateral move at best.