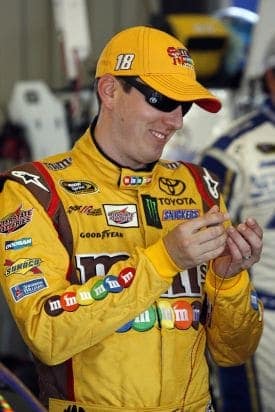 Despite 11 out of the 12 spots in the 2012 Sprint Cup Chase having already been solidified, this weekend’s regular season finale at Richmond International Raceway should prove to be one of the most gripping of the year.

That’s because of the lone remaining Chase spot. Though currently held rather handily by Kyle Busch, it’s by no means his to lose. In fact, losing will not be a part of the equation for Busch or four other drivers Saturday night.

With the Chase’s rules that the final two spots — the wild card positions — be determined by amount of wins, it comes down to five drivers within striking distance who have won once in 2012. Kasey Kahne, who has two victories on the circuit, is guaranteed the first wild card spot. The others in contention? Busch, Jeff Gordon, Ryan Newman, Joey Logano and Marcos Ambrose.

Kyle Busch tops the list of Wild Card contenders in the final race to the Chase. Will he manage to snare the coveted spot?

All signs point to Busch prevailing, with a win solidifying his inclusion in the Chase. But here’s the thing: a win does the same for the other four contenders. Carl Edwards is another outside shot, but without a win this season, he would not only have to win Richmond, but would also have to pass Busch and Gordon in the points standings in the process. That’s a lot of ground to make up, something that would only be really tangible if both drivers had major problems in the race.

So, no slight to Mr. Edwards, but let’s focus on the five racers with one win. Let’s evaluate each driver’s chances based on how they’ve been running lately, as well as their histories at the Virginia racetrack.

Kyle Busch: Can we basically hand this final spot to Busch? I don’t want to start off the analytic part of this commentary with a bleak, “It doesn’t matter, this is gonna happen” mentality, but betting against Busch would be quite audacious. In 15 races at Richmond in the Cup Series, the younger Vegas brother has four wins, 12 top-5s and 13 top-10 finishes. So even if he doesn’t win, which is already a bit of a stretch, chances are he’ll be in the top five by race’s end. And if none of the other drivers can pull off a victory Saturday, he’s all set. If I was a betting man…

Jeff Gordon: Probably the next popular choice, if only because he’s closest to Busch in points and has turned around his season quite soundly since a catastrophic first part of 2012. In his career, Gordon has two wins, plus 15 top-5s and 24 top-10s in 39 races at the track. Those are fairly good numbers, though certainly not up to Busch’s standards. But what’s best about Gordon is his experience. He’s the veteran of the bunch and has faced plenty of high-pressure situations before. He’s the older choice, but you can be sure he’ll have a lot of folks rooting for him after a fairly dismal 2012.

Ryan Newman: At an average finish of 11.8, Newman has a slightly better record at Richmond to Gordon’s 14.7, and even scored a win at the track in 2003. But it’s tough to really factor him into having a chance at the win merely because his season has been so lackluster compared to his usual results. Plus, he hasn’t finished better than eighth since 2009. It’s going to take a drive of epic proportions for Newman to stay in contention for the Cup this year.

Joey Logano: Like Newman, Logano’s had a rough season despite a win, and his job insecurity probably hasn’t been helping. To make matters worse, Logano has only a single top-5 finish in seven total Cup starts at Richmond, so a victory Saturday night in the series would be slightly uncharacteristic. Coupled with the rumors that he’ll be named the driver of Penske’s No. 22 soon, his attempt to make it into the Chase may be somewhat out of his mind at this point.

Marcos Ambrose: Here’s the dark horse of the bunch. Ambrose has historically decent results on smaller tracks, especially Bristol. He’s not afraid to poke the nose of his car in tight spots anyway, and he’s got a shot to make it into the Chase at a track at which he’s scored a top 5 and two top-10s in seven races. I think we’ll see Marcos Ambrose drive the race of his life Saturday night, basically either winning the race or crashing out in the process.

Who I Think Will Make it In: …yeah, it’s still gonna be Kyle Busch.