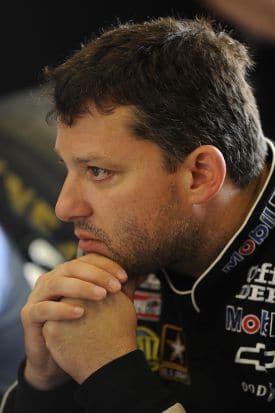 Tony Stewart and Matt Kenseth: two racing horses of clearly different colors. One loves Indiana and everything in it; the other is obsessed with the Green Bay Packers. “Smoke” will take his temper to your mouth, then buy you a beer; the “quiet champ” of 2003 has the most sarcastic sense of humor nobody ever hears about. One is a self-described bachelor, winning a title on the heels of dumping his girlfriend last September; Kenseth, in contrast, has had two children within the last three years.

Until now, they’ve been tied together by nothing more than a helmet throw, an angry Smoke retaliating for some ill-advised contact that knocked both drivers from a chance of winning Bristol in August. In a few days, perhaps an announcement will leave them loosely connected; Kenseth is poised to take over Stewart’s former No. 20 car, the Home Depot Toyota at Joe Gibbs Racing starting in 2013. But as Atlanta’s competition failed to break the “bad news” cycle, these men dominate the NASCAR headlines for another reason no one wants to talk about.

Kenseth, poised to leave Roush Fenway Racing is a former NASCAR champion, has led the points for much of the year and won February’s Daytona 500. For much of the season, he even led the points but yet remains without a full-time primary sponsor to grace the hood of his No. 17. Stewart, a three-time Cup Series champ is also its defending one, winning the title in a thrilling battle with Carl Edwards that came down to the last lap at Homestead. This year, he’s won three times, has clinched a Chase spot as of this writing, and is poised to stage a repeat bid. But all that’s not enough for Office Depot, his primary sponsor in 22 of 38 races this year who’s decided to reduce that number to zero–yes, zero–for 2013.

Despite his success this season, Tony Stewart is losing Office Depot as a sponsor for 2013.

To repeat, that’s two of NASCAR’s best drivers on-track–and two of their most recognizable faces off track–that can’t get major, Fortune 500 companies to sign on the dotted line anymore. In Kenseth’s case, his problems have caused a domino effect, a move to JGR leaving the sport’s anointed “best driver of the next generation” Joey Logano sitting on the street for 2013.

And they’re not the only ones raising eyebrows over the “blank quarterpanel” problem. Dodge, one of the sport’s four manufacturers, is keeping other racing programs going but bolting NASCAR, effective November 2012. Ryan Newman may face a pink slip as well; what’s left of his Stewart-Haas sponsorship is heading to the boss after the U.S. Army decided to march off his No. 39 car. In making the move, the military division made it clear they’re still spending money elsewhere in racing, keeping money inside the NHRA; but their days connected to stock cars are done.

I wish I could say those are the only storm clouds. But that’s like a forecaster saying a major hurricane’s sitting an hour away and telling you not to evacuate, and that the storm is going to miss us. DuPont is selling their paint division, leaving questions as to whether they’ll back Jeff Gordon effective the end of 2013. Budweiser, whose Cup commitment with Kevin Harvick is already reduced to 20 races, has its contract set to expire next November. And to replace them, the number of new full-time owners and teams are… nothing. Well, almost nothing–unless you want to count the jalopies out there running a few laps and then parking it. The start-and-park phenomenon, not the point of this column but the “field fillers” in the case of a dwindling field of competitive entries, have reached 25% of the 43-car grid in some events. And unless Brian France tries to give out free lotto tickets, that percentage is expected to maintain, if not grow, for 2013.

In announcing their departure from Stewart, Office Depot referred to the “changing business landscape warrants a realignment of priorities and resources.” Some may say that pertains to a weakened economy. OK, so then why does Office Depot make commercials and sponsor other major sports? Why are they still negotiating to potentially be the “Official Office Supplier of NASCAR?” Let me read the apologists some real English: that line means, “It’s not worth it to spend the money on sponsoring a car anymore; other things give us more bang for our buck.”

It’s as simple as that. And that would be an acceptable line of thinking if, say, Stewart was running 25th every week. But he’s the _defending Sprint Cup champion,_ purchasing engines and chassis from the New York Yankees of NASCAR, Hendrick Motorsports. Not only that, he’s been in the news consistently this year, whether it be for his Eldora Race for the Dream, that helmet throw or multiple trips to Victory Lane. There couldn’t be a much better selection.

So what’s going on? Why, even with TV ratings about even from last year does the sponsorship market in NASCAR continue to die? There’s a number of theories. One is age: despite their success, both Stewart and Kenseth are well outside that coveted 18-34 years age bracket. Companies look at 40-somethings and worry, the same way they’re concerned about a lack of those “next generation” fans in the stands. Just check out a quote from the Army as to why they’re leaving Sprint Cup:

“We can’t justify the investment in NASCAR as much as can in other things that we are doing,” said “Army Marketing Director John Myers.”:http://www.ketknbc.com/news/army-to-pull-nascar-sponsorship “[The audience is] starting to skew older.”

Older fans? Outside the 18-34 demographic? No Fortune 500 involvement. It gives the impression, to the guys in the suits that the sport is “not hip.” If you want to be extreme, you can even replace that word with “dying.” So, as the economy squeezes advertising dollars NASCAR falls further down the list of where they’ll spend cash, if not taking it out of their budget altogether.

Another issue we could be facing is cost; as the middle class in Sprint Cup has disappeared, a garage full of rich and poor the multi-car owners are still asking for $20 million, $25 million deals, and higher. Compare that with, say, Tommy Baldwin Racing, which is looking for one-tenth of that money just to survive and run every week. The gaps between the “haves” and “have nots” have never been greater, but the “haves,” with bloated race shops of hundreds of employees, don’t want to downsize the people they care about. So they put patchwork deals together, making $20 million out of ten different sponsors as the pool of potential backers grows smaller for everybody else. NASCAR never steps in to cut costs, and… the awful cycle continues.

You would think, after three years of no funded rookie drivers (Logano was the last) and no new team owner involvement, NASCAR would step in and do something. IndyCar, through the way money is redistributed through the teams and their _attempts,_ at least to control cost are getting sponsors to step up; the audience might be there, but the business model is working. It’s a dangerous game when you have the opposite scenario. No matter how many people show up in the stands, turn on that television or buy Tony Stewart t-shirts, they can’t save a bad business model from turning NASCAR’s top teams broke.

When will someone address the problem? When will the top owners come together and try to find a solution? The answers may remain a mystery; and while they do, Office Depot and Tony Stewart are just the tip of a very dangerous iceberg.