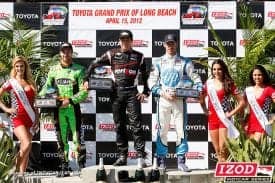 Seventeen points. That is how many points separate IZOD IndyCar Series points leader Will Power and second place driver Ryan Hunter-Reay. Seventeen points. It always amazes me that we can go 14 weeks into a racing season (much longer than that if NASCAR is your thing) and still have two drivers so close at the top. Maybe it’s because I’ve never been good at math. Who knows.

But the point is, we have a hell of a title fight on our hands this year, and for the first time in a long time, I really am undecided as to which driver is truly the favorite to take the title. Will Power and Ryan Hunter-Reay have been leaps and bounds ahead of the competition all season long. These two guys deserve to be where they are. And they couldn’t have got to where they are now more differently.
Power, the Road Racing Wonder from Down Under (lame, I know, but I’ve been searching for a good nickname for Will for a long time now. Just go with it) dominated the early portion of the season. After a rather lackluster effort in the season opening race in St. Petersburg, Power went on a tear, winning the next three races and putting the field on notice that he meant business after losing the title the year prior. Most of us in the IndyCar community threw up our hands and gave in. There was just no way Will was losing this year. He’s too strong and he’s too hungry. This HAS to be his year…right?

The IZOD IndyCar Series title race is down to two. Will the champion be road course ace Will Power… Photo courtesy INDYCAR LAT USA

Well…perhaps we spoke too soon, because just shortly after Power’s third straight victory, a funny thing happened. Oval racing came along. And Will flopped. Hard. Power delivered finishes of 28th, 8th, 12th, and 23rd in the four midseason oval races. Uh oh. The critics who only weeks earlier had been anointing Power as the runaway champion were now questioning whether or not Power was cut out for oval racing at all. Power’s sheer disdain for oval racing has been made abundantly clear in the past, but this season it was on full display for everyone in the free world to see. Suddenly, the man everyone was chasing looked vulnerable.

Suddenly, this title race didn’t seem so cut and dry. Enter Ryan Hunter-Reay.
For as consistently excellent as Power was in the season’s opening stretch of races, Hunter-Reay was equally mediocre. Sure, he posted a solid second place run in Sao Paulo, but he followed that up with a rousing 27th place finish in Indianapolis, which was, oddly enough, one spot better than Will Power, who finished 28th. If someone at this point in the season suggested that Ryan Hunter-Reay would be one of two drivers vying for the title at season’s end, they would likely have been ridiculed.

But out of nowhere, Hunter-Reay did the unthinkable. The former ChampCar driver once known as a road course specialist and not much more posted back to oval victories in Milwaukee and Iowa. Hunter-Reay then showcased his versatility by backing up those two wins with a third win in Toronto. Who saw that coming? Now, Will Power was no longer the title favorite. In fact, Power continued to slump, and by the time Hunter-Reay had posted his third victory, Power had fallen to second in the points, 34 markers behind Hunter-Reay. There was a new sheriff in town, one with a hyphen in his name.

But as the summer continued on, Hunter-Reay faded. He faded quite a bit, in fact. After his third victory, Hunter-Reay posted finishes of 7th, 24th, and 18th. The man who only three weeks earlier seemed so unstoppable now found himself mired in third in points, scratching to find answers to his team’s newfound woes.
Meanwhile, Power was tearing it up on track, posting three consecutive podium finishes in the races following Hunter-Reay’s third win. Power reassumed his position back on top of the IndyCar world, and the title once again appeared to be his. But Hunter-Reay wasn’t done just yet. Last week in Baltimore, Hunter-Reay delivered a big win when he needed it the most. No, he did not completely erase Power’s lead, but he inched his way just close enough to it. And perhaps more importantly, he has something that Power does not have heading into the season finale: momentum.

So who gets the nod? Which driver is going to win this thing? Does Power win it on the strength of his points lead and superior Team Penske engineering? Or does Hunter-Reay steal it away on the strength of his momentum and prowess in ovals? A compelling argument could be made for both. One thing is for sure, we will not know who is going to win this title until the final lap. Bank on it.

So here we stand, and out of twenty-something drivers who started the season with hopes of winning the title, only two drivers remain. One Aussie, the other American. I hate to be cliché, but with only seventeen points separating the two, it really is too close to call. But this is why we watch. This is why we watch this stuff all season: to see the two best drivers in the series right now duke it out on one last grand stage.

It all comes down to this. Seventeen points. We’re finally about to crown a new champion, IndyCar Nation, and make no mistake, it is going to be well worth the wait.