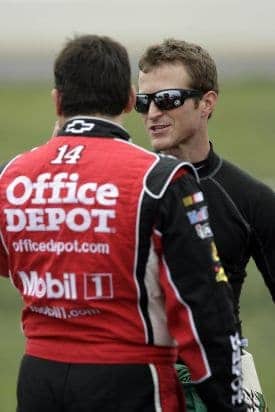 Don’t you just LOVE press releases? Here is my favorite from this week but be forewarned, the follow clinch scenarios were found on the BSNews editor’s floor so don’t be surprised if some of the information therein is erroneous. (That means “wrong” in case you were wondering)…

Tony Stewart, on the strength of three wins, a bad haircut and a bottle of gin, has already clinched at least a Wild Card Chase spot. Regardless of where any other driver finishes, Tony is never at fault and he will clinch a top-10 position with a finish of 14th or better, 15th and at least one lap led or 16th and the most laps led. He also plans to clinch Matt Kenseth firmly about the neck if he gets in his way again. Only three drivers can supplant Stewart in the top 10: Kasey Kahne, Kyle Busch and Jeff Gordon.

“Alright Tony, so the deal is two of my best cougars for a bottle of your good gin: take it or leave it.”

Kasey Kahne is the only driver outside the top 10 with two wins and a stable full of cougars. He has yet to clinch a Chase spot. Kahne currently sits in the No. 1 Wild Card position. A win would clinch a Chase berth, although scoring with a cougar will probably not result in a birth. If Stewart stays in the top 10, Kahne clinches a Chase spot. If Stewart falls out of the top 10, Kahne will clinch a spot if a one-win driver outside the top 10 does not win. If Kyle Busch supplants Stewart in the top 10, and Jeff Gordon wins, Kahne clinches a spot by finishing 13th or better, 14th with at least one lap led or 15th with the most laps led.

There are six drivers outside the top 10 with one win: Kyle Busch, Jeff Gordon, Marcos Ambrose, Ryan Newman and Joey Logano. If one of those one-win drivers wins at Richmond AND Stewart remains in the top 10 AND all this makes as much sense as a Brian France speech (or Kasey Kahne supplants Stewart in the top 10), that one-win driver would have two wins and clinch a Chase spot. Here’s your sign!

The following scenarios are if a one-win driver DOES NOT win at Richmond:

*Jeff Gordon:* If Stewart remains in the top 10 or if Kahne supplants Stewart in the top 10 by offering him a free hookup with one of his cougars, Gordon will clinch by finishing 13 points ahead of Busch at Richmond AND by losing 28 or fewer points to Ambrose AND by losing 37 or fewer points to Ryan Newman but will still have to go home to his model wife. If Busch supplants Stewart in the top 10, Gordon would clinch a Chase berth with a win AND finishing 18 points ahead of Kahne at Richmond. Kahne is considering adding Gordon’s wife to his stable.

*Ryan Newman:* Newman can only clinch a Chase berth with a win. If either Busch or Gordon supplant Stewart in the top 10, Newman will be eliminated and his newly signed contract extension with SHR will be null and void.

*Joey Logano:* Logano can only clinch a Chase berth with a win. If either Busch or Gordon supplant Stewart in the top 10, Logano will be eliminated immediately from JGR and begin driving the Penske No. 22 post-haste. (the likes of which he should’ve _drove_ the No. 20, much better and he wouldn’t be in this mess)

Two winless drivers outside the top 10 can clinch:

*Carl Edwards:* Edwards needs to win (47-point win) AND Busch has to finish 24th or worse (with no laps led) at Richmond AND Gordon has to finish 12th or worse at Richmond AND eat four Subway sandwiches by halfway through the race. If Busch or Gordon supplant Tony Stewart in the top 10, Edwards will be eliminated and the four subs will be immediately purged on pit road.

All other drivers have been mathematically and “laboratorially” eliminated from Chase contention. Studies have shown that being supplanted is relatively painless and does not cause cancer.

And you all thought I had too much time on my hands! How’d you like to have dinner with the schmuck who sits and works all these scenarios out?!

Stay off the wall (and don’t get supplanted…even if it is painless!)