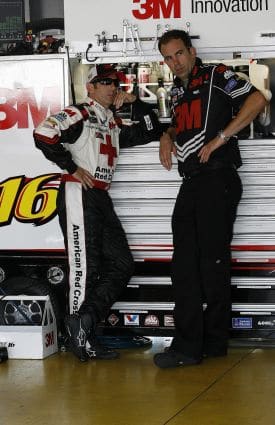 _After leading the points before Richmond, Matt Puccia and Greg Biffle are now sitting tied for fifth with Clint Bowyer as the green flag waves over the Chase for the Sprint Cup this weekend at Chicago. Puccia took over the reins on top of the No. 16 pit box in July and has since led Biffle to a win, two top 5s, and five top 10s in nine races. Greg Biffle is the only driver in the Chase with the chance to secure a title in all three of the national touring series of NASCAR should he claim the Cup. That task has eluded everyone since the Truck series was started in 1995. If Puccia and Biffle can avoid the up and down nature that Biffle’s luck seems to follow, they just might pull it off_.

_Puccia talks to Frontstretch about attacking the Chase, banking and its effect on setup and how you challenge the track while keeping the driver comfortable._

Mike Neff: *Chicago isn’t the highest or lowest banked of the Intermediate tracks. Does the degree of banking, being around 18 degrees, have a dramatic impact on the setup of the car since you aren’t relying on banking as much as you do at Charlotte?*

Matt Puccia discusses what it will take to find success for his No. 16 in the Chase and beyond.

Matt Puccia: You do for sure. Last year was the first year I was there with a Cup car. The one thing about Chicago is it is getting to be a little more worn out than Charlotte and what Kansas now will be. You have to take that age into consideration. It provides for a lot more racing, like Atlanta does, but the degree of tire wear is not as extreme as Atlanta, but tires are worth something there. Looking forward to going to Chicago and getting the Chase kicked off. Greg has traditionally run well there. We ran very well there last year before a mechanical issue came up.

Mike Neff: *Chicago is a bit unique in the fact that the back straight is not straight, it has some curve to it. Does that bend have any effect on setup at all?*

Matt Puccia: Not really. I guess it has some effect on how you enter the corner but from a setup aspect it doesn’t have any impact.

Mike Neff: *With this race being the kick-off of the Chase, the constant debate over points racing and aggression is amplified with this first race of the Chase. When you set up the car do you approach it with a mindset that you don’t want to do anything too aggressive that would knock you out of the hunt before it even gets started?*

Matt Puccia: I think we’re past that now. We’ve done enough over the whole season to flesh out where our whole program is and we’re pretty comfortable with where our cars are and setups are. You have to be aggressive because it is only 10 races and you have to perform from the drop of the green. We’re going to go in there with the mindset of winning and see where the chips fall.

Mike Neff: *Looking at the track from the air, it is hard to tell what the radii of the corners are at different tracks. Everyone says that every mile and a half track is different. Is the radius different at Chicago than it is at Atlanta or Charlotte and, if so, does that difference have an impact on how you set up the car.*

Matt Puccia:Not much, maybe a little bit. Obviously every track is unique in its own way. You have to look at the track surface and how abrasive it is and how aged it is, that plays a bigger factor in the setup. Banking obviously plays a big role and the degree of banking can result in some small tweaks that we make to change the overall setup.

Mike Neff: *Chicago is in the Midwest and it can be ridiculously humid in the late summer. Does humidity or water content of the air play a roll in how you tweak your EFI setup for races?*

Matt Puccia: That is more of a question for Doug Yates than for me. Humidity definitely plays a role in engine tuning but I defer to Doug and the engine guys when it comes to that stuff.

Mike Neff: *You mentioned earlier that there is a little more character to Chicago. It is getting some age and some bumps. When you’re setting up your package is it a driver preference as to whether you put in more rebound vs. compression in the shocks to keep it down on the track or is it more driven by what you want the car to do and the driver just needs to suck it up?*

Matt Puccia: It is both. Some drivers like it more aggressive in the bumps and some like it softer. It is all in how the driver likes it. Chicago is getting more age to it, a lot like Texas. It is getting abrasive and getting bumps, especially down into one. You have set yourself up around that and keep that in mind when you’re making your adjustments. Every track has its own little quirks and that is the quirkiest part of Chicago.

_Puccia hasn’t been on the box for a full year but he’s developed a great chemistry with Biffle and they’re poised to become the third Roush Fenway driver to win a title. If they can manage it Biffle will also make history as the only driver to win titles in Trucks, Nationwide and Cup. Chicago could go a long way in determining whether that will happen or not._