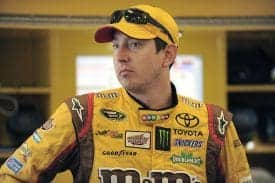 There really is no excuse for a driver the caliber of Kyle Busch or the No. 18 team missing the Chase for the second time in four seasons. A force on the race track that blasted from Cup prospect to all-star on the back of an eight-win 2008 campaign, which faltered in the Chase, then ultimately resulted in less than a season later Busch failing to object to crew chief Steve Addington being forced off the box of the No. 18, 12 wins in the past two seasons notwithstanding.

While the blame for Saturday’s poor finish can be pinned on his crew chief, who is to blame for Kyle Busch missing the Chase?

Fast forward to 2012, and for all the winning, the hype, and the accolades for being brash and aggressive, Busch is right where he was back in 2009 when Addington left; on the outside looking in, a raging tiger on the track but a paper one when it comes to actually challenging for the Cup. Even though it was ultimately Dave Rogers’ ill-fated pit call on lap 277 to stay out and bank on a rain-out that left the No. 18 mired too far back in traffic to challenge Jeff Gordon for the second wild card slot, one pit call did not make or break this season. Engine woes, a poor finish at Daytona in the summer…all of these factors had one of NASCAR’s strongest teams in a hole to begin with. In contention or not in 2012, this has not been the team that in 2008 was feared no matter where the Cup circuit went next.

Fortunately, for Rogers at least, it does seem that the JGR organization has learned a thing or two about handling these situations, and their driver, since 2009. Kyle was short-spoken after Saturday night’s race, but got through his post-race comments without throwing the team under the bus or disparaging anybody in the engine shop or on-track. Team owner Joe Gibbs wasted no time conferring with Rogers following the event, and confirming the stability of the team and its leadership moving forward for the rest of the 2012 campaign.

Perhaps most telling of the situation though, both of the weekend and how the No. 18 team proceeds, was how Rogers described his interaction with his driver immediately following the conclusion of Saturday’s ill-fated event:

“You know, we were both speechless,” Rogers told NASCAR.com. “We went up there [in the hauler] and looked at each other and nodded and said, ‘We’ll talk later.’ But we didn’t say much. Kyle did a good job of keeping his composure and took it on the chin like a man, and went back to his bus.”

Part of the reaction may have been composure, maturity, or even more grimly the realization that for this night at least, the driver wouldn’t be held responsible for a 16th place finish that handed the unlikeliest of Chase bids to Jeff Gordon, a driver that literally had to have the sky open up to the most intense storm NASCAR has seen in recent memory to score his only win this season. But there’s another angle to this story that has to be told. Namely, Rogers was the guy that got the call when Addington got forced out, his run of success with JGR and with handling Busch’s even-more abrasive self three seasons ago notwithstanding.

Rogers may well have been an internal JGR promotion, and even a deserving one. But having said that, he was Busch’s pick to a large degree as well. Rewind back to 2009, and just look at JGR still today. Kyle Busch wanted a Nationwide Series championship, even after falling to pieces in pursuing a Cup crown in 2008, so he got the keys to a car in 2009. Even though he missed the Chase pursuing the minor league trophy that year, he still got to run plentiful Nationwide Series races in the seasons that followed. Now, despite being arguably the most hyped driver in the Cup field without a serious championship run on his resume, Busch still gets to pursue team ownership, gets a free pass when he does things like run over teammate Brian Scott in Nationwide competition. Even the harshest punishment he’s ever received (being parked for the final races of 2011 after wrecking Ron Hornaday in another of those minor league starts he just has to have) came when his title hopes for the season were long dashed.

There’s a reason Busch was subdued dealing with the media; there were no fingers to point or heads to roll like there have been in the past. A driver that’s been given the keys to one of the strongest teams in the Cup garage, seen leadership changed to support him at the slightest sign of struggle, that’s been forgiven for actions on track that would end careers for others, came up short again…even if it was the mistake of the supporting cast that ruined Richmond.

Where does the No. 18 team move forward from here? It’s obvious JGR’s got something going right for it. Denny Hamlin leads the Cup Series in wins and is the hottest driver on the circuit heading to Chicagoland, while 2003 Cup champion Matt Kenseth left the only home he’s ever known in NASCAR racing to come join the ranks. The cars are there. Ownership clearly thinks the leadership is there.

And while there’s definitely some hard questions that need to be asked of the team’s current engine arrangement, it’s time to, for perhaps the first time, ask some hard questions about the driver roster as well. Kyle Busch has the talent, but one can’t help but to wonder if it’s being managed properly. Sure, the Nationwide Series starts have been cut in 2012, but is team ownership still proving too distracting? Sure, Dave Rogers has a track record of winning races, but is his demeanor really the compliment needed for the firebrand Busch?

After all, the driver known as Rowdy has been with JGR for five years now. And in that time, he still hasn’t bested his last points effort before leaving Hendrick Motorsports. Kyle’s certainly not a guy ripe for replacement, but he’s not meeting expectations either.

And a knee-jerk crew chief replacement isn’t going to be a cure-all. Just look at 2009, and how quickly that situation repeated itself for Busch and Co.