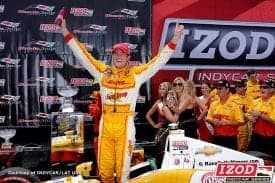 “I definitely like the position we’re in, chasing. We’ve been doing that for most of the year. I think we’ve been getting better at it,” said Hunter Reay this week. “We need to go out and focus on winning. That’s really what it’s going to be about.”

But there is a new wrinkle in the story this year, other than Hunter-Reay, who is making his first run at the series championship. It’s a wrinkle that may make focusing on the win even harder than usual.

Ryan Hunter-Reay, looking for his first IndyCar title has multiple victories so far in 2012 – including two on oval tracks.

This year, there is Auto Club Speedway. To NASCAR fans, it’s a snoozer of a track no one but Southern Californians could love, and even that’s questionable given attendance figures when the stock cars come to town. For IndyCars, it’s wide open and wicked fast. Looking at the extreme, Gil de Ferran ran a qualifying lap for the 2000 CART event at 241.428 mph. Looking at a more realistic figure for this weekend, Helio Castroneves holds the IZOD IndyCar Series track record at 226.757 set in 2003.

It’s also a 500-mile race. There is only one other 500-mile event on the schedule, the Indianapolis 500. Everyone knows trying to run that distance with that many stops, putting that much pressure on mechanical parts and pieces means just about anything can and does happen.

“Reliability and all that sort of thing come into play. You could be two laps down early in the race and get that back in the end,” Power said. “I think, yeah, it will be interesting.”

Take into account that this is 500 miles on a blindingly fast track with the engines wound up to the breaking point the whole way, and it could be an even bigger crapshoot than Indy.

“It’s going to be obviously a tough race, 500 miles. We just focus on the job that we have to do to execute on the day,” Power continued. “The rest will work itself out. Either we’ll be champion or we won’t.”

The 2000 CART race where de Ferran set the insanely fast time was also a 500-miler. How daunting was completing that event? Six cars were running at the finish out of 26 that started and only five ended the race on the lead lap. Of the rest, there were five crashes, nine engine failures, one overheating, one turbocharger, one oil pump, one gearbox, one fire, and one did not start.

Yes, it was a CART race, so the cars are completely different, although the cars are completely different from the last time the IndyCar Series ran at Auto Club as well. The demands remain pretty much the same, however. 500 miles of high revs is hard on an engine. Unless everyone changes them out and takes the starting grid penalty, some of these engines will already have miles on them. They still have turbochargers, oil pumps and gearboxes. Over the course of this race, someone is still bound to have a crash because they are still going to be running well north of 200 mph.

Will Power, leading the point standings coming into Fontana’s season finale has found the oval tracks to be daunting at times in 2012.

The IZOD IndyCar Series has not raced at the track since 2005 so neither Power nor Hunter-Reay has any race experience there. Then again, since the cars have completely changed since 2005, no one else really knows what to expect either.

“I think the formula of cars have changed quite a bit since they last raced here. When they last raced here, they raced pretty open, two- and three-wide,” Power points out. Even though the cars are different, there still something to be gained from familiarity with the track, something Power has to rely on his team for. “Track experience always helps. I know when we are testing Helio has a lot of experience. Kind of handy to have Helio help me out there.”

Hunter-Reay is generally given the nod as having the advantage this weekend, coming off the strength of his two oval wins earlier this season. Those victories were at Milwaukee and Iowa, tracks nothing at all like Auto Club with the exception of each having all left turns.

Power is not known for being a good oval races. As a matter of fact, he’s largely known as a driver who does not like these types of tracks. He has just one win on an oval, at Texas Motor Speedway last season. Still, Texas is a whole lot more like Auto Club than Milwaukee or Iowa.

So that makes both drivers closer to each other than you might think. There’s one race left to decide a championship and in many ways, the setup makes it a genuine wild card. It’s 500 miles on a track the series hasn’t visited in seven years with cars that are all new for this year. It’s hard to tell which driver might have the edge.

“When it comes to one race, I don’t think there’s any advantage to it at all,” Hunter-Reay added. “This is one race. I look at it from the standpoint, just like I looked at Baltimore: we have to win to get ourselves there. It’s pretty straightforward for me.”

What happens between the start of the race and the finish 500 miles later might be a giant wild card, but Hunter-Reay is right. What each driver needs to do is pretty straightforward. For Power, he has to execute all day and get the best finish he can. For Hunter-Reay, playing catchup 17 points in arrears, he has to go for the win.