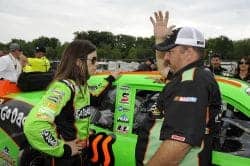 For a team that is the de facto Hendrick Motorsports entrant in the Nationwide Series, JR Motorsports’ results of late can’t be described as anything other than underwhelming. No wins since 2010, with only two poles in that same span. In 59 starts for the operation in 2012, only 20 top 10 finishes have been scored. And with the team’s leading full-timer Cole Whitt a distant seventh in points, JRM is poised to have its worst finish in team history in terms of fielding a regular driver.

Considering this is one of the rare teams in the Nationwide garage with full sponsorship on its race cars, that their driver stable includes the most hyped open-wheel convert since Juan Pablo Montoya and the hottest prospect the Truck Series had at the end of the 2011 campaign, that they carry the name Earnhardt, the status quo does not meet any expectations. The status quo is not acceptable.

Danica Patrick may have been comfortable with crew chief Tony Eury, Jr., but JRM was not.

When looking at the stats sheet, it’s hardly surprising then that in a matter of weeks, both Tony Eury Jr. and Sr. are no longer with the company, leaving the team to finish 2012 with their most visible ride depending on an interim crew chief, and the whole organization rallying behind an interim competition director. But on the other hand, seeing the company that Dale Jr. and his sister built part ways with two Eurys is about as shocking a change, as big a departure from the status quo, as has occurred during the team’s existence.

Because underachieving is nothing new with JR Motorsports…it’s been all but the history of the company. Subtract Brad Keselowski’s stellar tenure with the team that saw six of the team’s nine total wins and their best ever points finish (third in 2008 and 2009), and JRM has had only one driver that’s ever lasted a full season in any of their race cars. That campaign, completed by now-Cup regular Aric Almirola, produced 18 top 10s but no wins and came after a slow start that took the No. 88 out of title contention before the season ever got going. USAR prospects Mark McFarland and Shane Huffman got booted from the organization early in their respective careers, only to have owner Dale Earnhardt Jr. acknowledge after Huffman’s firing that once he got in the race cars himself, they weren’t anywhere near where he thought they were in terms of performance.

Now, in 2012, Cole Whitt has treaded water, if not regressed, from the performance level he was posting in his lesser-funded Turn One Racing truck a season ago. And as for Danica Patrick, well, she’s raced like an open wheeler.

So why the change now? Why the sudden move to oust their competition director of five years and a crew chief that Danica Patrick has been outspoken about regarding her comfort level?

Could it be that after being so trigger happy with yanking drivers from the seat in the case of performance issues (Huffman, McFarland and the momentary tenure of Kelly Bires come to mind) that the team is taking a new approach towards shaking up personnel in pursuit of better on-track results? Did the situation of having a father overseeing competition while his son enjoyed a docile relationship with the team’s primary development driver take away from the fire and edge needed to stay ahead of the curve? Or is this as simple as wanting to use the rest of a quiet 2012 season to experiment and gear up for 2013?

There’s numerous intangible arguments that can be made as to why the trigger was pulled on both the competition director and Danica’s crew chief despite both their longevity and their family ties to JR Motorsports. But the real answer as to why this had to happen, now? It’s a fair wager that the primary concern of all NNS teams was responsible…money.

Uncomfortable or not, the reality is that without Danica Patrick JR Motorsports would be solely dependent for survival on the No. 88 car that, with Cole Whitt behind the wheel, has been largely irrelevant for most of this year. And it’s no secret that for all the TV coverage, for the storybook pole-winning run to start the season at Daytona, for the strong performance at Road America, her rookie season has not produced the type of results that lead to a Cup promotion, which has been the plan all along. That plan takes on additional importance when one considers the current financial state of Stewart-Haas Racing…and the existential sponsorship crisis that team is currently facing. SHR needs that GoDaddy.com cash next year, and they need it badly.

The facts are this…regardless of her own performance, the Hendrick satellites need Danica Patrick now more than ever…meaning they’ve got to put a product worth driving on the track. She has the TV networks wrapped around her finger, and a big-dollar sponsor that’s not going anywhere. Truth be told, Patrick can go anywhere she wants and will have a ride.

Even if that home’s not JRM.

Look at it that way, and the end of the Eury era at JRM wasn’t really a change. It was a necessity.