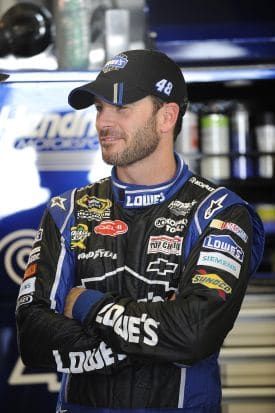 *10.* *Danica Patrick:* Wears a seductive costume, exposing as much skin as possible, then bumps into the person holding the candy, yells at them as if it’s their fault and then has her agent swoop in and steal it.

Brad Keselowski: Comes as Jimmie Johnson. No matter what he does, other guests accuse him of being boring even when he wears a clown wig and falls off the refrigerator. The beard itches and people keep calling him “hairball.”

*9.* *Mystery Debris:* Unknown guest pretends to be invisible, then jumps out at inappropriate times, screaming to change the vibe of the party before making out with one random person just to “make their night.” (AKA Hand them the race)

*8.* *Kurt Busch:* Dresses up as the Pillsbury Dough Boy, except every time someone tries to put a finger on his stomach he responds by automatically punching them in the face.

*7.* *Kyle Busch:* Dresses up like a WWE boxer, saying something completely inappropriate to everyone he meets until getting reprimanded by someone dressed as an M&M. That’s when he immediately jumps into the closet and changes into his second costume: an office nerd. Spends the rest of the night talking weird, sci-fi movies and avoiding saying anything remotely inappropriate.

*6.* *Jimmie Johnson:* Dresses as Brad Keselowski and spends half the night tweeting everything he does, including pictures of the bathroom, the hall closet and the kitchen sink. Never fails to offer his opinion on any subject, and to the surprise of everyone, is totally entertaining.

*5.* *Michael McDowell:* Comes for five minutes, brings everyone at the party together to lead them in prayer, then stuffs one pocket with candy, says his car has a “mechanical issue” then runs like hell out the door and squeals his tires on the drive out.

*4.* *Juan Pablo Montoya:* Dresses up like a tank and runs over everybody in sight. Party is halted for an hour after he blows up the punch bowl.

*3.* *Joey Logano:* Comes Dressed as Burned Toast because Sliced Bread was taken by Brian Vickers, who only stays for an hour.

*2.* *NASCAR Official:* Dresses up like a ghost, with a white sheet and refuses to speak when asked a question. Only talks at inappropriate times, making statements that have nothing to do with the conversation and ends everything he says with, “Brian told me to!” Example: “So did you see what Liz did on Friday night?” “He was speeding on pit road, I tell you. I used my 40-year-old stopwatch to figure it out… I swear… Brian told me to!”

*1.* *David Ragan, David Gilliland, David Reutimann, Dave Blaney, Bobby Labonte, and Casey Mears:* All come dressed as the Invisible Man. Wearing the same costume would ordinarily be terribly embarrassing, but with these guys, nobody even notices they’re there, even though they stick around all night.