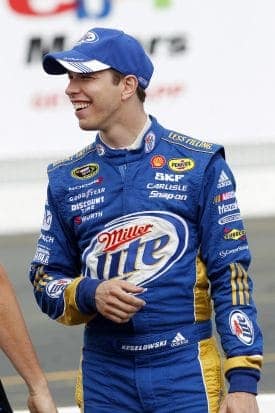 *Did You Notice?…* Brad Keselowski’s Chase is one of the more impressive in the history of the playoff format? Lost in the shuffle of Jimmie Johnson’s wreck, the Gordon-Bowyer brawl and “cell phone gate” is just how well the No. 2 team has performed, putting them in position to cakewalk to the title Sunday at Homestead. Barring a major mishap, like some sort of engine failure or blown tire Keselowski should ease to a top-15 finish, all he needs to secure the hardware for the first time in his Sprint Cup career.

So how has Keselowski done it? A three-pronged combination of consistency, wins, and heart. Let’s tackle them one at a time. Here’s how the driver’s Chase average finish to date compares with other champions since 2004:

While many people were calling Jimmie Johnson the title favorite, Brad Keselowski went about assembling one of the best Chase performances in the format’s nine-year history.

As you can see, only Johnson in ’07 had a better average finish, a mark Keselowski can match with a finish of second or better this Sunday. It’s that amazing consistency, with no result worse than 11th that kept the pressure on the Five-Time champ and put Keselowski in position to capitalize when it counted.

Those strong performances have also come paired with wins; Keselowski’s two victories, at Chicagoland and Dover, are tied for the most in the Chase (Matt Kenseth and Johnson also have two apiece) and he’s led 326 laps. Those are lofty numbers that prove he’s running up front, week in and week out, at a level that’s clearly championship caliber. His five victories overall equal defending champ Tony Stewart’s total from last season, more than enough for any titlist in this sport to have attached to a yearlong resume.

Finally, and most importantly, Keselowski has fought through this Chase with heart. Right away, he pulled two of the first three punches with those early victories to set the tone. When the No. 48 team fought back, inevitably, while Kes went through his hardships at Charlotte (running out of gas) and Kansas (bad setup) his attitude never changed.

*Did You Notice?…* A Nationwide Series schedule with just one new venue, Mid-Ohio? It’s unfortunate at a time when NASCAR could take chances; instead of experimenting in new places (like the Trucks with Eldora), they’ve been attaching the Nationwide Series to Sprint Cup like superglue. There are just six standalone events next season for the second-tier series, matching this year’s total even though Cup drivers are running fewer races, for fewer teams than ever.

Since the driver’s championship has once again grown some legs, with a half-dozen heavyweights at least expected to contend next year and some shocking attendance issues at racetracks (Fontana?) the series has nothing to lose by expanding elsewhere. What was interesting about the Mid-Ohio announcement is the sport taking on an IndyCar venue. So why not put more standalone events at IndyCar tracks, with open-wheel dates where there’s a built-in audience on the weekend and a chance to turn on a whole new group of fans to the sport? There’s a handful of ovals they’re running at, like Pocono where breaking from the main series could be possible. You’re still going to get the TV coverage, regardless under the current deal so experimenting might be money well spent. And let’s not even talk about a second straight year running at Indianapolis… do we have another Darlington, Labor Day Weekend issue on our hands here? I’m afraid we do.

*Did You Notice?…* Richard Childress getting marginalized by his Chevrolet competitors? In the last month, rival Rick Hendrick has poached Earnhardt Ganassi to partner with their engine program; then, Stewart-Haas Racing (another Hendrick customer) poached RCR’s best driver for 2014 and beyond. At the same time, RCR’s main investors, behind the scenes, are looking to sell their percentage, another possible bailout that puts the organization in a tenuous position.

Looking ahead to 2014 and beyond, the organization is left with the Dillon brothers, Childress’ grandsons whom so many feel are heavily favored; Jeff Burton and Paul Menard potentially under contract. Of all of them, the most important cog now, believe it or not, becomes Menard, who underperformed this year but comes packaged with the big-time sponsor money that can compete with Hendrick and its growing, behemoth operation. The Menards have limitless pockets, cash that might need to be well spent at RCR for an engineering and horsepower department that’s clearly behind their major competitors. The Dillons, for all their potential talent, still don’t have the “big money” behind their deals; Ty’s Bass Pro Shops support, for example, won’t make it up to Cup when they’re backing Tony Stewart’s No. 14. And while the loss of Harvick is huge, it’s that Budweiser sponsorship potentially going with him that makes RCR need everything else to stay in place. The Dillons will need funding… and to get there, the drivers already running in RCR’s top-tier equipment will need to keep the team competitive enough to earn it.

*Did You Notice?…* Quick hits before we take off:

– At this point, everyone and their mother have already checked in on the Jeff Gordon controversy, so I’ll save you 500 words. To me, though the punishment was quite simple; he should have been parked. If Kyle Busch gets benched after doing the same thing to Ron Hornaday, last year in the Truck Series anything different resembles inconsistency. It’s really that simple. And consider that Gordon pulled his reckless act under green-flag conditions; that’s a heck of a lot more dangerous than slowing down, ever so slightly for a yellow flag.

The funniest thing about those punishments, by the way? Probation through December 31st. If the two drivers steer clear at Homestead, what the heck are they going to do the rest of the season? Spit on each other from opposite tables at the banquet? That’s the most laughable add, ever; just say they’re being watched for the next seven days. Anything else, unless it extends into February 2013 just makes NASCAR look downright silly.

– I don’t think I’ve ever seen that much of a sense of urgency out of Clint Bowyer, ever. Guess body-slamming someone into the outside wall can blow the temper of pretty much anyone…

– In theory, all the championship battles in NASCAR’s top three series can be settled with laid-back, conservative performances on Sunday. But there’s still plenty of reason to watch until the last lap. Anything from a blown tire, to a mystery piece of debris that cuts a radiator to even a momentary lapse of concentration can happen to these favorites. James Buescher and Keselowski are gunning for their first NASCAR championship; there’s got to be some nerves there, whether they’re made public or not. And Ricky Stenhouse, Jr. has the distraction of running the Cup Series (and his pending full-time promotion) to contend with. I’m not saying any of the three are likely to get knocked off; they’re heavy favorites. But if there’s even a _ghost_ of a chance, it’s worth it to tune in. Why come nine months in following the sport and then blow off the final race?