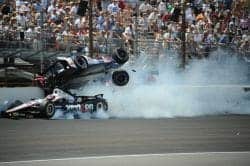 Your kids aren’t the only ones wishing for presents this month! During the busy holiday season, our IZOD IndyCar staff sat down and composed letters to Santa. They decided to ask for what they most want for some of the best drivers in the world and for the series as a whole.

Dear Santa, can we stop Will Power from becoming involved in oval incidents like this one far too often…

I wish Santa would bring the Andretti family some luck at Indianapolis Motor Speedway. Seriously, that family is cursed when it comes to the famed rectangle.

I wish Santa would knock some sense into the IndyCar ownership group so that they don’t repeat the mistakes made in 2012.

I wish Santa would buy Will Power some improved Oval Racing skills and a better attitude. Both would go a long way in bringing Power a title.

I wish Santa would mediate negotiations with IndyCar and Michigan International Speedway so that the track returns to the schedule.

While we’re at it, I wish Santa would fork over a couple million dollars so I can get my own IndyCar career started!

I want Santa to bring…

…Will Power a copy of “Oval Track Racing for Dummies”

…Ed Carpenter a copy of “Road/Street Course Racing for Dummies” and then we’ll see how David vs. Goliath shakes out!

…James Hinchcliffe a turn at starring in the GoDaddy ads

…Ryan Hunter-Reay the respect he deserves (finally!). After all, he is the champion and, therefore the best driver in the sport.

…ear plugs and blast shields for the employees of A.J. Foyt. Actually, they could use a lifetime supply of those… Super Tex gets excitable…

… If Santa can, I’d like to see him deliver Will Power some oval racing acumen. Thrice denied the championship, the ovals have been his biggest problem. The window for Power may be starting to shut, especially with the rise of the Andretti organization. And surely, Franchitti won’t be having another difficult year like 2012.

…For the strange double-header weekends to do well. This experiment could be one that backfires in a tremendous way. Or maybe they’ll be more interesting than anticipated. Quite the unknown there.

…For Formula One-inspired standing starts to be a positive attraction. Many of the rolling starts have been handled poorly in the past, so this change could bring an added element to the overall race. In addition, we’ll get to see the drivers be forced to do something different, which could put some life into the events – though I’m sure that Takuma Sato will make some kind of crazy move and wreck half the field during one of these.

…For Lotus to come back. With just two engine manufacturers for the upcoming season, the competition now seems tame – and yes, Lotus was not competitive last year anyway. But here’s to hoping that they’re not ditching the series altogether and will re-emerge for the 2014 season. The more the merrier, right?

…Please please please Santa, bring some strong lasting leadership. Indy’s continual management issues seem to make it feel like the series is about to wither and die. This offseason again showed how confused the series is about itself with the ouster of Randy Bernard. At least the rumors of Tony George taking over have passed (though they’re likely to resurface – he’s like Jason from the Halloween films, always coming back). Please make sure they don’t return.. it’s time Indy had something stable in its top position.

…For the F1 and Indy pairing on the NBC Sports Network to be a good one. Indy should benefit from this arrangement, or so one would think. But NBCSN is still sussing out its racing coverage, and as a relative newbie that could be problematic. At the very least, we can think of NBCSN (almost seems like it needs more letters) as the Open Wheel Network.

…For continued safe racing. No deaths, no major injuries this past year. Keep bringing that, Santa. Always.