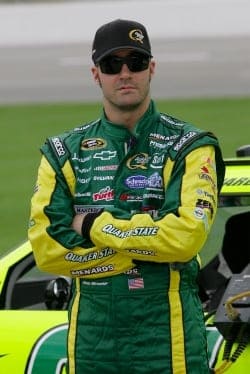 *Team Ranking: 2nd* of 3. Kevin Harvick was the only RCR driver to make the Chase, but Menard’s performances were enough to beat out the floundering Jeff Burton.

*High Point:* For a driver as consistent as Menard normally is, it is a little difficult at times to pick a high water moment. Menard’s best finish of the year was at Kansas, the week that crew chief Slugger Labbe came back from his suspension (see below). However, it’s arguable that Phoenix in November was the team’s best race of the year. There, Menard was fast all weekend, part of a strong Richard Childress Racing triumvirate that saw teammate Kevin Harvick eventually make his way to Victory Lane. Menard started in seventh, remained there after the drop of the green and was every bit of a match for Joe Gibbs Racing’s dominant Toyotas during the race (although he never did manage to lead a lap). After dropping back late due to a tight condition (and jumping the cushion on a late restart), Menard came back to finish ninth. A victim of the last-lap pileup, caused by Danica Patrick’s oil a crash-free finish could have left him even higher. And with the right track position during the race? One could argue Phoenix was the only time all year where, on equal terms, Menard and the No. 27 team could have possibly made it back to Victory Lane.

*Low Point:* Unlike 2011, there was a specific dip in Menard’s season, despite the driver’s typical consistency. The team was docked 25 driver and owner points after Michigan in August for illegally modifying frame rails. In addition, crew chief Slugger Labbe was suspended for six weeks, leaving a leadership hole that was difficult to fill. Shane Wilson took over for Labbe during that time period, but his style struggled to match Menard’s. Unfortunately, for all parties involved the time Wilson was at the helm coincided with some of the weakest runs the team had all season. Four of the six races saw Menard finish outside the top 20, including three in a row at Dover, Talladega and Charlotte; he never ran higher than 12th during that stretch and blew what longshot opportunity was there to make the postseason.

*Summary:* If there is one aspect of Paul Menard’s Sprint Cup career that stands out, it is the fact that he is good… just never great. With Menard, a typical race results in a finish somewhere in the teens. For example, there were 12 races in 2012 that Menard finished in positions 11-15, a full one-third of the schedule.

The problem, of course, is taking the next step and turning oneself into a weekly top-tier contender. While Menard kept the car out of trouble, leading to the type of consistency most owners can appreciate he was never able to take quality equipment and hustle it up to the front. One year after his first Cup victory, a major upset at Indianapolis the veteran led a _total_ of 26 laps in 36 points-paying events. For the fifth time in six full-time Cup seasons, he snagged one top-5 finish or less, typically invisible on television with an average finish (16.2) slightly better than the norm for a fully-funded car on the grid.

This “B” level stat sheet, as you might expect wasn’t enough for an “A” level trip to the postseason. Menard’s performances were simply not really good enough to get into the Chase, although Labbe’s suspension did hurt the team and took away momentum during the summer homestretch.

*2013 Outlook:* There are no known changes for Menard’s team for the 2013 season. Menard will be back in the No. 27 Chevrolet with Slugger Labbe as his crew chief. Menards, the family-owned chain of home improvement warehouses, will be back once again to serve as the team’s primary sponsor, while a series of vendors will once again grace the hood. Peak will likely not be back in the same capacity, however since they have reached a deal to sponsor Clint Bowyer’s No. 15 for a few races.

Menard finished the 2012 season with a bit of momentum, scoring four top-12 finishes in the final five events. However, with the brand new Chevrolet SS chassis that are coming for 2013, it is unclear as to how much that will help the No. 27 team. Could Menard get back to Victory Lane? It’s certainly within the realm of possibility with Labbe at the helm. But with a track record like Menard’s, “good” but never “great” it’s hard to envision a giant step forward that suddenly makes this driver launching a serious postseason bid.