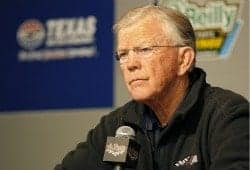 This year’s rendition of the NASCAR offseason was action-packed, to say the least. A new car model has been vigorously tested since the checkered flag last waved at Homestead-Miami, all while several of stock car racing’s biggest names hopped onto the Silly Season carousel, landing with new organizations. Some drivers were left out in the cold, while others look to flourish aboard their newfound rides with high-profile car owners. All of them, inside the garage will be dealing with changes, from one less manufacturer afoot, to new qualifying procedures and the addition of a historic dirt track to the Camping World Truck Series circuit. All of these combine to make the 2013 schedule one of the more highly anticipated we’ve seen since NASCAR’s peak in the mid-2000s.

Here to break it all down, Hot or Not returns from offseason hibernation to examine who should be proud of the adjustments they’ve made during the winter months… and who needs to spend the first few weeks of 2013 “catching up.”

*Matt Kenseth*
What could be hotter than a former Sprint Cup champion’s move to a championship-winning organization? “Special K” finds himself firmly atop the Hot or Not rankings solely for just that reason; no other offseason storyline seems as much of a surefire success story waiting to happen than this one.

Smile, Joe! You made the best offseason move of 2012, according to many by hiring Matt Kenseth to drive your No. 20 Toyota.

Matt Kenseth takes the reins of Joe Gibbs’ No. 20 Home Depot/Dollar General Toyota Camry in place of the not-so-hot Joey Logano, who failed to live up to lofty expectations set by the long since departed Tony Stewart. In four seasons behind the wheel of that car, Logano failed to make the Chase and won only twice; that’s one less victory than Kenseth had throughout the 2012 season alone.

Reaching out to make this acquisition, just one year after failing to land Roush Fenway Racing’s Carl Edwards *Joe Gibbs Racing* itself deserves a shout-out alongside its new driver. The team’s already bloated stable, consisting of Kyle Busch and Denny Hamlin now has shot up to near-Hendrick talent-level status thanks to this move. Yes, Busch missed the Chase last year but Hamlin and Kenseth are yearly title contenders; more than likely, all three of these teams will make the postseason in 2013 and battle for the title.

*Gen-6*
Kenseth’s change of scenery wasn’t the only thing turning heads over the winter. A set of new look cars were the only other topic with enough horsepower to rival news of the ’03 champion.

Deemed Generation-6, Sprint Cup’s new mode of transportation has all the curves and specs to rival an Italian supercar. Fans will now be able to more easily distinguish their favorite drivers from other paint scheme lookalikes as cars blur around the track on race day thanks to an increased sense of manufacturer individuality. That, along with a decreased weight, improved safety features, a larger spoiler, and new tire compounds should in theory have the new machines looking and driving like evolved forms of their previous selves.

But watch out; teams will need their best minds to work out the car’s bugs in a hurry before drivers and fans cry foul. Otherwise, Gen-6 could end up in the scrap yard alongside projects such as the now defunct Car of Tomorrow.

*A new set of rule changes* should give fans yet another reason to tune into race coverage before next Sunday’s Daytona 500 telecast. For those who have followed stock car racing for some time, needed adjustments to qualifying and practice procedures will make it feel as though NASCAR has gone back in time to 2004.

For one, say goodbye to the dreaded testing ban. Organizations will now be allowed four testing dates on whichever sanctioned track they desire to take their talents. This addition to their schedules should heat things up for powerhouse teams and darkhorses alike, who were once forced to gather information at places like Rockingham — offering a limited benefit when you’re not running on the _exact same_ oval where you’re going to use your setup.

The rulebook overhaul doesn’t stop there, however. New qualifying procedures will have people on the edge of their seats days before the green flag waves. The top 36 car’s order on the starting grid will now be determined based on speed, leaving six spots for owner points spots and one champion’s provisional open for the taking. No longer will the dreaded top-35 owner rule, criticized by fans and garage insiders alike lock all but eight positions in the starting lineup before qualifying begins.

Additions such as the aforementioned and race untested Gen-6, along with throwback procedural changes may level the playing field enough to give the latest crop of Sprint Cup rookies a fighting chance. Newly announced lovebirds Ricky Stenhouse, Jr. and Danica Patrick will be among those vying for the title of Rookie of the Year, along with Timmy Hill in Frank Stoddard’s No. 32. Look for some underdogs, like Germain Racing and BK Racing to also be more competitive at the start of 2013 with everyone starting their notes from scratch.

As for the freshmen, the two-time defending Nationwide Series champion Stenhouse is widely considered to be the favorite to hoist the award at season’s end, piloting the recently vacated Roush Fenway No. 17 Ford Fusion. Patrick and Hill are expected to be a distant second and third, respectively.

Matt Kenseth wasn’t the only big-name driver on the move this offseason. The annual changing of the guard at many organizations was actually quite kind for *Joey Logano,* a driver who thus far hasn’t blossomed into the phenom that many racing pundits thought he had the potential to be.

Logano has been given a second chance to regain his footing at Penske Racing, where he has been tasked with piloting the No. 22 Ford. Despite not having the same level of prestige as his previous seat, the Shell-Pennzoil Fusion team has its own set of similar pressures. For reasons beyond “Sliced Bread,” Penske’s second car has been cursed by drivers who lose their jobs quickly either because they can’t control their emotions or because of substance abuse problems. The 22-year-old will be forced to up his game from day one if he wants to hold onto perhaps his last chance with a top-flight organization, avoiding the dreaded list of “former employees.”

Having world-renowned *Eldora Speedway* play host to the Camping World Truck Series is unbelievable. It seemed like a dream when it was officially announced that the half-mile dirt oval, owned and operated by “Smoke” himself, would play host to some of stock car racing’s more aggressive and up-and-coming drivers on July 24.

But all is not rosy in rural Ohio. Reality has set in as track officials scramble to update medical facilities and make further accommodations for what is planned to be a record-breaking crowd on hand to witness the first NASCAR sanctioned dirt track event since the 1970 season. Yes, the facility is dealing with a sellout, but can they handle the increased traffic, media onslaught, and other responsibilities a “major league” event will entail? The calendar is marked for this summer, but until this rare spectacle is witnessed and proven to exist, once and for all, it remains on the cool end of the spectrum.

What could possibly be colder than cool? Only a select few can be categorized at cold. *Kurt Busch* and *A.J. Allmendinger* didn’t enjoy the type of success expected entering last year.

Busch has settled in at Furniture Row Racing after never being fully able to control his temper, giving premier organizations no reason to risk offering him a contract. Meanwhile, Allmendinger finds himself involved in a part-time gig with Phoenix Racing after completing the substance abuse recovery program that got him release from Penske. At least they’ll be on the track this year, but I wouldn’t expect great results for either as they both deal with the consequences of their actions.

*Dodge* decided to withdraw from competition completely for ’13 despite winning the series championship for the first time since 1975 thanks to Brad Keselowski. Some might say that they went out on top, similar to legendary athletes Michael Jordan and Barry Sanders, but it’s hard not to imagine what could have been had the titlists decided to stick with them. A commitment there could have brought IndyCar’s Michael Andretti into the fold, possibly looped in Richard Petty Motorsports and brought us even further parity among four manufacturers.