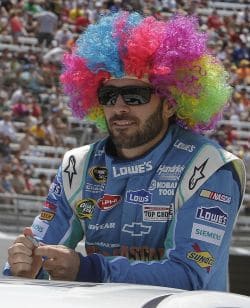 *10.* *The Encore:* Choose what Juan Pablo Montoya will blow up THIS year!

*9.* New windshield name decals replaced with Twitter handles. The driver with the most new followers gets the victory.

*8.* *Dunk the Dodo:* Fans select one lucky driver to sit in a dunk tank during driver intros, while the rest take their best shot at him as they walk across the stage.

*7.* *Say No To Drugs:* Randomly, during the second segment, fans get to choose whether drivers need to stop and get tested for banned substances around Lap 30. Live camera switches to infield care center where instant results tell us who _really_ is using…

*6.* Fans get to choose which lap the drivers turn around and race in reverse. He who completes the most laps without hitting anything or anyone wins.

*5.* NASCAR dads in the race are required to make pit stops to complete either A) diaper changes or B) the packing of a healthy school lunch.

*4.* Fans get to vote on the lap NASCAR stops the race so Brad Keselowski can tweet an in-car picture.

*3.* A pothole will randomly appear on the track at the halfway point of the race. Fans get to choose where.

*2.* Bachelor/Bachelorette-style vote to see which driver is really the best match for Danica.