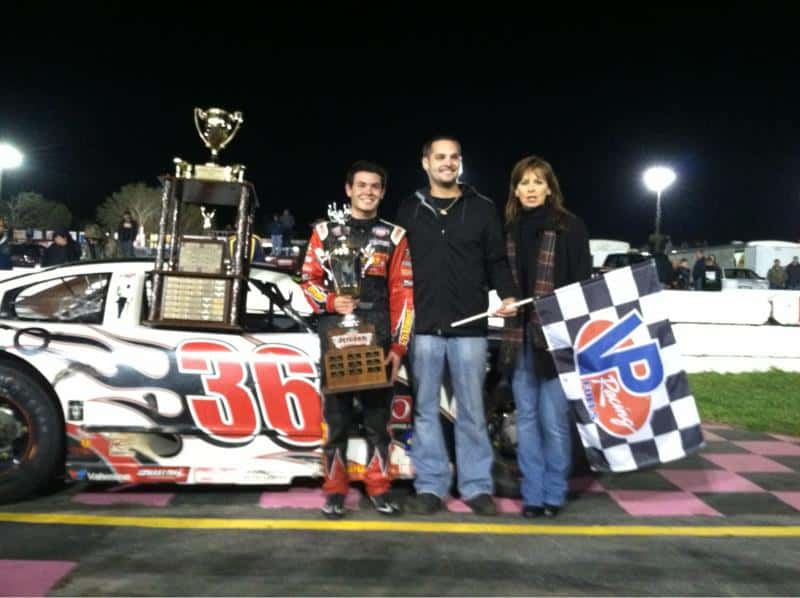 _In 2013, one of the brightest stars on the NASCAR horizon has agreed to spend a little time each month with the readers of Frontstretch. He’ll share where he’s racing, his successes and struggles and also give you some insight into what he does with his spare time. Larson raced 123 times in 2012 and won 30 of those races, a nearly 25% winning percentage. In 2013, he has picked up where he left off, running 10 races and going to victory lane in five of them. Next up will be his debut in the Nationwide Series this Saturday at Daytona._

One year after winning New Smyrna, driving a Late Model Kyle Larson has moved up to the Nationwide Series full-time. Come back once a month this season to check his progress in the latest addition to our Driver Diaries.

Hello everyone, I haven’t had much of an off-season so I wanted to let you know what I have been doing leading up to Speedweeks at Daytona. I flew to New Zealand on the 17th of December and spent about two weeks down there. I was able to run five midget races while I was down there and won four of them. I swept the International Series at Western Springs Speedway, which was the first time that had ever happened in their long history.

Once I was done in New Zealand I flew straight to Tulsa for the Chili Bowl. Things started off great. I won the first night of preliminary races and then had a great battle with the Swindells in the Saturday night main event. Unfortunately, just past halfway, I spun it backwards and stalled on the track. Once they got my car going again and I rejoined at the back of the field; the bottom of the track had taken on so much rubber it was really hard to pass. As the race wound down a car slowed in front of me and caused me to spin again so I called it a night. Even though I didn’t have the finish I wanted, the Chili Bowl was still a bunch of fun.

Since the Chili Bowl things have been kind of calm. I have been spending a bunch of time playing around with my go-kart at the Mooresville Motorplex in Mooresville, NC. There are a few drivers that play around up there with us. Brad Sweet, Denny Hamlin and Kasey Kahne just to name a few of them. I try and head out there whenever I can just to have fun.

Last month we announced the Nationwide deal. Since that came out I’ve had a bunch of requests for interviews so that kept us pretty busy before we came down to Daytona. Since we’ve been down here I’ve been a little busy.

I ran in a midget at New Smyrna. Bobby Santos, Taylor Swanson and two or three other cars were really fast in the heat race. I qualified with the quick time but only managed second in the heat. When the feature came around Santos had a flat right front that took him out of the running. Caleb Armstrong was faster than I was but on a restart my engine really took off and I cleared him before the flagstand. I thought he hit my rear tire and spun but I think we actually both hit some oil. I got loose but didn’t spin and Caleb did so I was able to win.

I got to run in the ARCA race on Saturday before the Sprint Unlimited. It wasn’t very exciting but I did learn some about the draft. It will be different running in the Nationwide race. There will be a lot more drafting and a lot more to learn about racing in the pack.

After the ARCA race we ran the Battle at the Beach. Monday night I won the Late Model race with a little bit of controversy at the end. Then I was running strong in the Modified race on Tuesday and screwed up on one of the very last restarts. I missed a shift starting on the front row. Woody Pitkat ran over me because he had nowhere to go and I hit the wall. Then, in the K&N race, I just hung out around 10th. That was pretty much all our car was good for. I was getting lucky at the end with all of the wrecks but the luck ran out and I got in the last wreck. I got into the left rear of the 21 pretty hard which bent my steering. After that I couldn’t turn so I didn’t make it back to the line.

Some people were curious about the Modified deal. It really just came around thanks to Bono and Gary Putnam both working at Earnhardt Ganassi. They decided to have me do it after talking with Lauren Ranier and Curb records came on board to offer a little sponsorship. Hopefully I’ll get to run that thing at Loudon and hopefully Bristol. I think those would both be two great race tracks to race at.

Modifieds are a little different from anything else I’ve ever run. They have more grip, turn better and they’re a lot of fun. They’re one of the cooler pavement cars I’ve ever run. I’ll enjoy it more on a real race track. Modifieds are fast but they aren’t even close to a 410 winged sprint car though. A 410 is the most powerful thing I’ve ever driven. I’ve raced a 410 on pavement a couple of times. Those things have a crazy amount of acceleration. For a pavement race they’re the wildest for sure.

That is all I have for now. I hope to be able to tell you about winning a Nationwide race the next time I write to you. Thanks for taking the time to read my diary, I look forward to writing to you again soon.